Vettel needed "one more lap" to pass Bottas for win 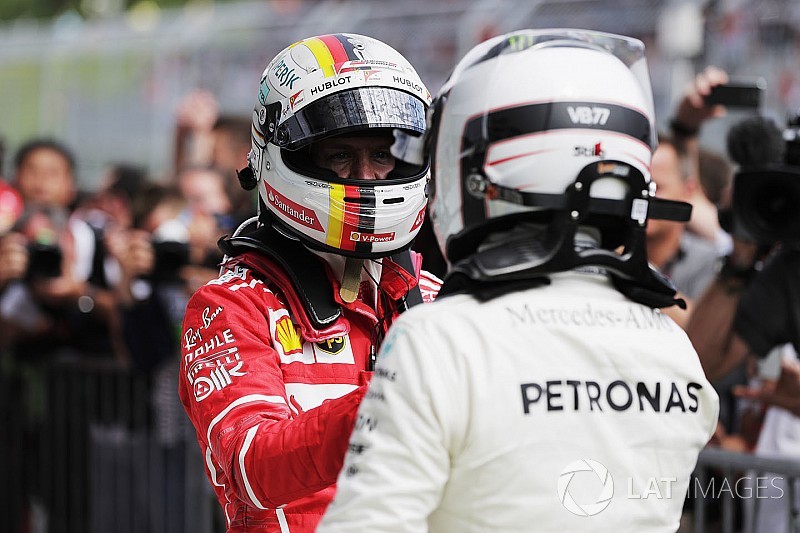 Despite having made his solitary stop in the race earlier than the Finn, Vettel made quick work of Bottas' advantage and spent the final minutes of the race close behind the Mercedes man.

As the pair navigated traffic, Vettel got to within half a second of Bottas in the two closing laps, but ran out of time to make a move for the lead.

Vettel wound up 0.658s off at the chequered flag, having understeered wide in the penultimate corner.

“It was very close,” Vettel said on the podium. “I was told he was in trouble.

“I felt much happier in second half of race - first half struggling to feel the car, as soon as we put on supersoft, car came alive. I was catching little by little, last laps getting really close.

“[Force India's Sergio] Perez cost me a bit of time with lapped cars. I think I needed one more lap because he [Bottas] was struggling to get uphill.”

Bottas had looked in full control of the race in the initial stint on ultrasofts as he built his lead to over eight seconds before second-placed Vettel took to the pits.

A later, slower pitstop left the Mercedes driver with a reduced lead over Vettel and with Ferrari's other driver Kimi Raikkonen ahead, yet to stop.

But while Bottas passed Raikkonen in no time, Vettel continued to make up ground as his rival found himself hampered by tyre blistering.

“I had a bit of a deja vu after what happened in Russia,” Bottas said on the podium, having likewise held off a late Vettel charge for his maiden win earlier in the season in Sochi.

“He was catching up, in the last stint I had a massive blister from lap five-six, which made it tricky. I could control the pace but backmarkers made it tricky.”

Asked about Vettel's “one more lap” assessment, Bottas said: “For sure he was getting close and they had more pace - I was struggling with the rear-left, had a blister that was getting bigger and bigger.

“But difficult to say [what would have happened in] one more lap. I was happy the race ended that lap.”