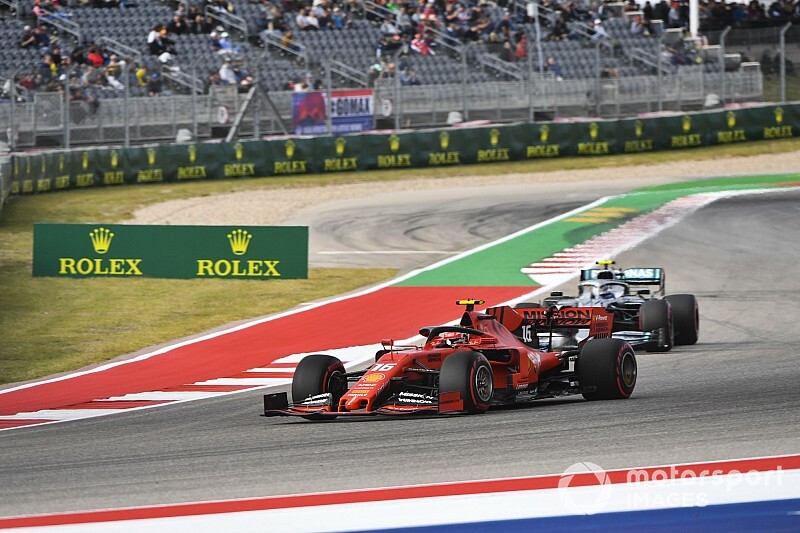 Formula 1 drivers have voiced concern that there is a risk of a run of crashes in the United States Grand Prix and potential for them getting hurt from "totally unacceptable" bumps on the Austin track.

The Austin circuit caused some major headaches for teams and drivers on Friday when a series of bumps caught them by surprise.

With several spins as a result of the undulating track surface, they have voiced fears that there could be consequences as the F1 weekend progresses.

Racing Point's Sergio Perez was very unhappy about the situation and said he was especially concerned for the race – when drivers risked being caught out when their tyres started degrading.

"It can be very painful," said the Mexican. "Someone can get hurt over these bumps and you have seen some drivers going off at very high speed, and it is due to the bumps.

"I think it is totally unacceptable."

He added: "I think today we are over the limit. We have seen some incidents due to the bumps and I think that is just not acceptable.

"In the race, and I hope not, but I expect to see some people crashing out when the deg starts to kick in. All of a sudden you get a bump in the wrong angle and go straight into the wall, so it is quite bad."

Red Bull's Max Verstappen said that he was mindful about driving off the normal race line in case hitting an unexpected bump hurt his back.

"You have to be careful," he said. "If you go a bit off-line and you want to outbrake someone, I'm always a little bit afraid to damage your back or whatever.

"It's something we have to look into of course. I don't mind bumps on a street circuit, it's part of it. But these bumps are quite severe.

"It's almost like a hump or a ramp in some places where the wheels are coming off the ground. That's of course not what you want. We'll have a look at it."

As well as the issues drivers were facing, Lance Stroll reckoned it was bad for the cars too.

"I think there are two or three big bumps that are really upsetting the car and it's not good for the engine either with big spikes in revs," he said.

"They've got to sort it out for next year, I don't think there's a solution for this year but going forward, there's two or three bumps they've got to remove.

"They're like speed bumps out there so it's too much. I think when you hit the rev limiter and get a bit of air it's a little bit much. It's more for the rallycross boys than for us."

Although the matter would almost certainly be brought up at Friday night's drivers' briefing, Perez did not believe a solution could be found to sort the matter.

"I am not an expert on that but I would expect there is not a lot you can do for tomorrow or Sunday," he said. "It is really bad."