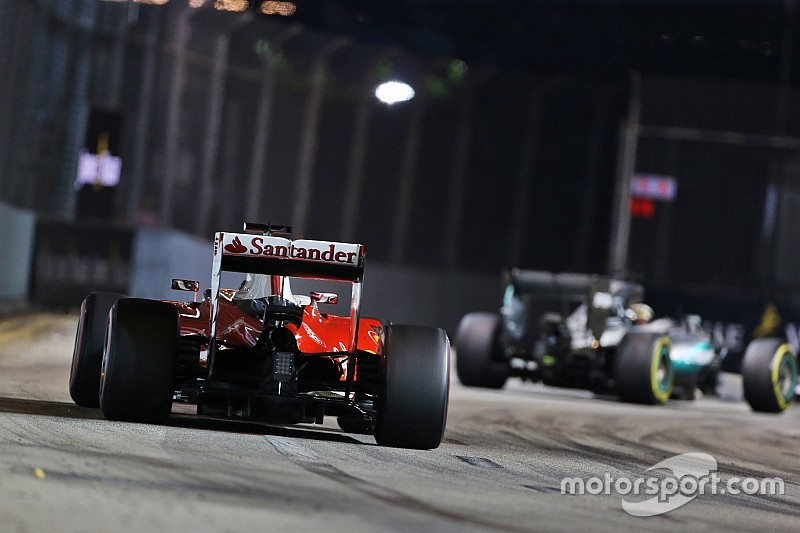 Ferrari team principal Maurizio Arrivabene is sticking by the strategy to pit Kimi Raikkonen for a third time in the Singapore Grand Prix, despite losing the podium position he’d gained over Lewis Hamilton as a result.

Ferrari reacted to Hamilton's third stop by pitting Raikkonen a lap later, but he didn't have a sufficient buffer to defend the undercut from the reigning world champion.

Despite this, Arrivabene believes the risk of leaving Raikkonen out was greater than pitting him for fresh rubber.

"I think it was the right decision to take," said Arrivabene. "At that point, keeping the tyre maybe [would] have [had] huge degradation – that would be a huge disaster.

"So we had to think about the opposite. We took a decision based on our data, and now the exercise to do is verify if our data was right.

"Kimi was very good today, he's showed he's not a world champion for nothing, in my opinion he was great."

After the race, Raikkonen was unsure about the strategy decision – and believed he could have made it to the end, like race winner Nico Rosberg.

"We have to see what we could have done better," said Raikkonen. "Obviously they managed to get in front of us again, so I lost the place – not much I could do at that point.

"I think [the gap] wasn't so far to the Red Bulls or Lewis, I think we had good speed but most of the race we were stuck behind them. And Nico had more speed than any of us.

"We gained one place, but that's not really what we're looking for. We're trying to be in a position to win. Third or fourth isn't what we want.

"I managed to get past Lewis, I think he made a mistake in Turn 7 and then we fight for a few corners. Unfortunately, they got us back.

"For sure we could have got to the end, but it's always very easy to say afterwards."

Grosjean has full confidence in Haas despite dismal weekend