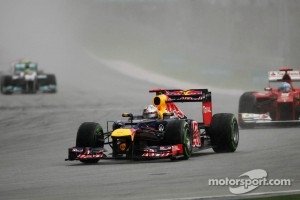 The back-to-back title winner's points hopes went up in flailing Pirelli rubber towards the end of the rain-affected Sepang race following contact with Karthikeyan's back-of-the-field HRT.

"He was off the track. In my view, it was over," Red Bull driver Vettel, now 17 points behind the championship lead after just two races, said on German RTL television.

"As in real life, there are a few cucumbers on the road," the German frowned.

"It's extremely frustrating, because in a chaotic race where I lost the radio right at the beginning, a fourth place would have been satisfactory."

More broadly, Vettel admits Red Bull has work to do.

Asked about the current pecking order in 2012, he said: "We are somewhere in the middle.

"(Ferrari's) Fernando (Alonso) did a good race today but the key was to always come into the pits at the right time.

"We have work to do, no doubt," added Vettel.