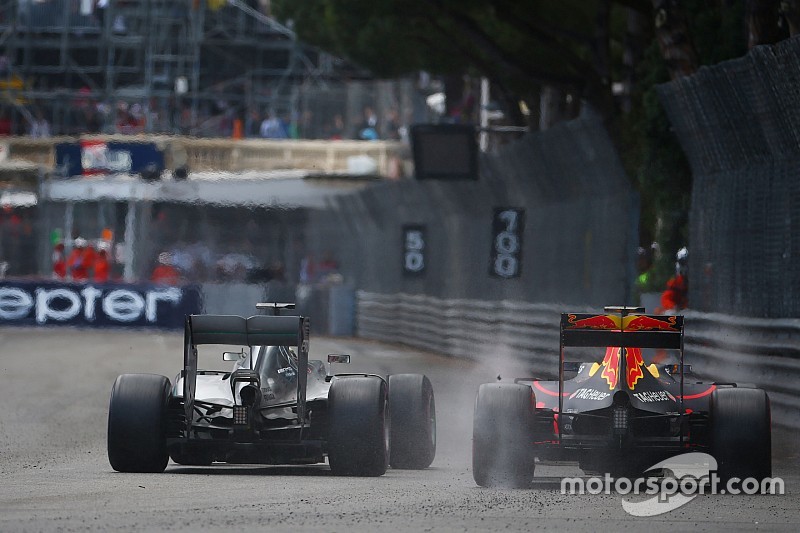 Almost lost in Monaco amid the post-race celebrations for Lewis Hamilton and the commiseration for Daniel Ricciardo was the fact that the winner had escaped any sanction for the incident that took place at the chicane on lap 37.

Under severe pressure from Ricciardo, the Mercedes driver had bounced over the kerb and then moved to the right on the exit, seemingly blocking the Aussie, who responded with an angry wave.

An investigation was soon announced on the timing screens, and for a while it appeared that Hamilton might face a sanction.

However, a short time later it was announced that there would be "no further action."

So what was he actually accused of, and why did he escape?

There were two elements to the story. Firstly, there was a question of whether Hamilton had gained an advantage when he jumped over the kerbs, which would have been covered by Article 27.4 of the FIA Sporting Regulations.

This says that "drivers will be judged to have left the track if no part of the car remains in contact with it and, for the avoidance of doubt, any white lines defining the track edges are considered to be part of the track but the kerbs are not.

"Should a car leave the track the driver may re-join, however, this may only be done when it is safe to do so and without gaining any lasting advantage."

Often this applies to a driver who makes a passing move but goes off track while doing it, and it's obvious to all that he has to give the place back. Indeed, this happened with Nico Rosberg's move on Fernando Alonso.

It's less clear cut if the driver in front goes off - when under pressure, for example - and comes back on still in the lead.

But given that on the exit of the chicane Ricciardo was closer to Hamilton than before, it was deemed that the Briton hadn't gained a "lasting advantage," so there was no question of him facing a penalty, or being asked to let Ricciardo by.

While the matter was debated by the stewards, it didn't actually generate an official report and hence decision.

The second element was whether Hamilton had actually blocked Ricciardo when he moved to the right on the exit of the chicane.

In this case, there was an actual stewards' report, in which it was stated that Hamilton was investigated because he "appeared to not leave enough room whilst defending a position in turn 11."

This was an alleged breach of Article 27.6 of the Sporting Regulations, which says that "more than one change of direction to defend a position is not permitted.

"Any driver moving back towards the racing line, having earlier defended his position off-line, should leave at least one car width between his own car and the edge of the track on the approach to the corner."

The stewards looked into it and Hamilton did indeed leave Ricciardo enough room, stating: "Car 44 left at least one car width between his own car and the edge of the track."

It was marginal, given the proximity of the barrier, and it was also a wet piece of road that Ricciardo could not really make use of, but Hamilton had complied with the letter of the law, so all was okay.

Rosberg intends to stay at Mercedes for "many more years"