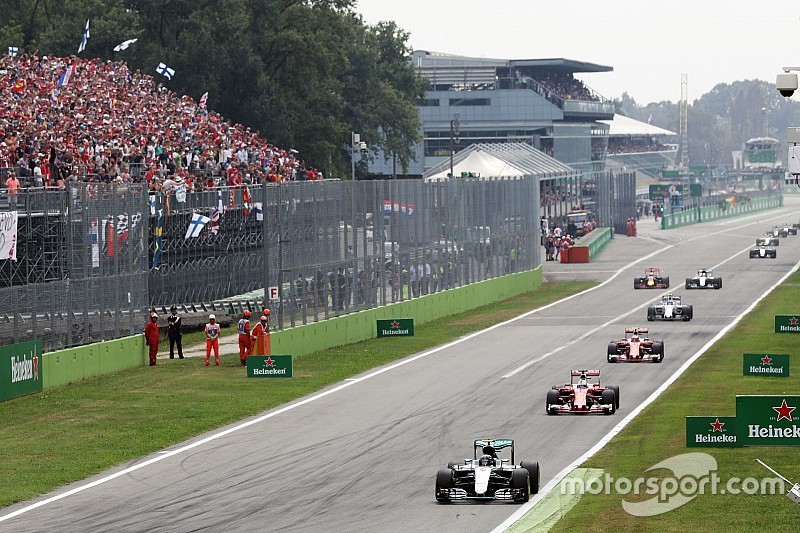 Lewis Hamilton's Italian Grand Prix was inevitably defined by his poor getaway from pole, but after that he was powerless to catch Mercedes teammate Nico Rosberg. Adam Cooper examines why.

A bad start for Hamilton shook things up at Monza, and added an unexpected twist to the afternoon, but it proved to only be a temporary glitch. Such was Mercedes’ pace advantage that the world champion was able to recover to second without too much stress.

But by the time he got there, Rosberg was long gone. And with an identical car and the same strategy, there was nothing Lewis could do to close down the gap.

While it created some excitement to the early laps, Hamilton’s bad start ultimately robbed us of what would have been an intriguing contest between the Mercedes drivers. We’ll never know if Rosberg could have beaten his team mate in a straight fight.

Mercedes has been the dominant force for three years now, but rarely have we gone into a Sunday with the likely outcome so apparent. Both drivers sailed through Q2 on the soft tyres, making it crystal clear that they would run a soft/medium one-stopper.

Meanwhile, rivals committed to the supersoft for the start looked likely to stop twice, because they would not have the range to do it in one.

In Spa, three other leading contenders were able to start on the soft, and the closeness of the laptimes suggested that Mercedes would not have an easy time of it on Sunday – until the Turn 1 drama intervened.

This time Red Bull tried to get through on the softs, but failed, leaving Hamilton and Rosberg alone. But even within the Mercedes camp there were question marks about whether it would be the ideal strategy.

“I think we felt that it was a strong possibility that we would have the pace to do it,” Paddy Lowe told Motorsport.com. “But you don’t know until you turn up and see where you are on a Friday, and indeed in P3, and can make that final judgement, that you have the margin.

“But then whether it was the right thing to do was still under debate even with Q2, because of course we had the option to go out and stick a supersoft.”

In Belgium, the decision to avoid the supersoft for Sunday was driven by the fact that Mercedes wasn’t comfortable with the tyre and its potential longevity. In Italy, it was more a simple question of strategy and the desire to avoid a costly second pit stop.

“Actually, if you looked at our Friday pace, the supersoft was our best tyre,” said Lowe. “We had a huge margin on everybody on the long runs, with the supersoft. So that made the debate more difficult: it was a great tyre for us, and then we chose not to use it in the race!

“The pit stop loss here is very high, so it’s very punishing to go to a two-stop, because you can imagine that while you’re in the pits everybody’s going straight past at 350kph. But we thought more people would do it even with the super than it turned out.”

Hamilton in the dark

One intriguing aspect of the decision to run the greater part of the race on mediums was that Hamilton hadn’t run them in practice, as he had only one set and it was Rosberg’s turn to do the Friday running.

That meant Lewis would get his first feel for the tyre at Monza when he emerged from the pits during the race – but Lowe insists that he would not have been handicapped.

“Not really, at the end of the day you’ve got to do the homework for three tyres on Friday, and you can’t do it with both drivers. There’s not a massive loss from that, the drivers know how to work with it and adapt. We’ve done that before several times.

“On Friday they always want to practice on the softest tyre, and then you’re splitting your homework on the other two. It’s not a big deal. We need the homework for the data, it’s not that the driver needs to practice.”

Everything changed with the bad start that saw the four cars immediately behind Hamilton on the grid go straight past, with a fifth – Daniel Ricciardo – also squeezing through. Now he had some unexpected work to do.

Hamilton quickly dispatched Ricciardo, but it took him some 10 laps to deal with Valtteri Bottas to claim fourth. The Williams has the same power unit, and the Finn had the benefit of supersoft that would not have to go as far as Hamilton’s softs.

However when the Finn’s tyres passed their sell-by date, his pace dropped off and, still stuck behind, Lewis lost valuable seconds. Out front, Rosberg had a clear track and could control the pace, and he picked it up just at the time that Hamilton was trapped behind the Williams.

Indeed, on Lap 6, Lewis was 6.5s behind Rosberg, but the time he got past the Finn on Lap 11 the margin had almost doubled to 12s, so this was a crucial period of the race in terms of Lewis losing touch with his teammate.

But instead of bringing that gap down now he had a clear track – the Ferraris were still out of range – it soon drifted out to around 14s, before coming back down to 12s as the stops approached.

The Ferraris were not a concern as their two-stop strategy became clear, although heading into the race Mercedes still wasn’t entirely sure if the Maranello team would go that route.

“We had the benefit of this soft tyre,” said Lowe. “We assumed that everybody that we would be trying to attack would be on a one-stop as well, so the whole point was to try and beat them with the fact that we had soft rather than the supersoft, running longer, effectively an overcut.

“We were all lined up, but as turned out it fell into our laps, because they all went two-stop anyway.”

Nico pitted on Lap 24, and Lewis came in a lap later, having led a token lap. On the mediums, Lewis initially took a second here and a second there off Rosberg. The gap came down to 9.6s at one point, but that was as close as he would get.

Thereafter it began to drift out again, and it was clear that Rosberg had things under control.

“I think when Lewis first got on the medium he was trying,” said Lowe. “But the point you saw him give up was when he went long on one of the chicanes. At that point you could tell he was going to settle for second.”

Lewis acknowledged that the gap was too big to chase down: “It was 15s at one point, and I brought it down to 9-10s, or something like that. But unfortunately that’s too big a gap to close with the tyres that we have.

"I had to make it to the end of the race. It soon became not a race with Nico, it became a race of making sure I stayed ahead of the guys behind, and didn’t lose any more points.”

His situation on Sunday reflects the way modern F1 is, in that the main focus on race day is driving to the tyres. When you believe that you have the pace with which to chase someone down, that’s frustrating.

“I could have kept going at the pace that I was going,” said Hamilton. “Maybe it would have brought the gap down to 6s – maybe. It’s still not enough to win the race.

"To close a 15s gap, you’re going to have to go several tenths quicker, three four probably, over that span of time, and you’re not going to have any tyres left at the end of it.”

Could he have pushed any harder and caught up?

“I might have, I might not have, but for sure if I had ever closed the gap I wouldn’t have had tyres to get past, at least. If I was 8s behind from the beginning, then I would have closed the gap.

"Then I would have put some pressure on, and maybe been in a better position. But 15s is a long, long way to come back with the way the tyres are today.”

Any talk of gaps has to allow for the fact that Rosberg was going only as fast as he had to, and if that margin had shrunk, he would have responded.

“Don’t underestimate Nico,” said Lowe. “Fantastic management of the tyres to keep the car strong with that one-stop strategy. A single lock-up is going to ruin that strategy.”

“Nico drove a great race,” Lewis conceded. “He was obviously faultless, and did what he had to do. Once you’re out in front here it’s relatively plain and simple, keeping the car on the track. Falling back to fifth, I used so much of my tyres just to get back through the field.

“When they told me he was 15s ahead… It was the whole back straight, Turn 10 to 11. I couldn’t even see Nico. All he had to do was match some of my times, and he was sorted.

"If we had better grip and I could push like a qualifying lap every lap, that would be awesome, but it’s not been the case for a long time...”

We’ll never know how things would have unfolded had Hamilton made a normal start, or even been second and right behind only Nico on Lap 1. Lewis had a clear edge over one lap, but Rosberg was adamant that he would have had a better chance in the race, come what may.

“When we were practising for the race on Friday I was looking really strong,” said the German. “At least I felt really good, I knew I could push Lewis in the race either way, if he was in front of me or behind me, that I had a chance to win, and I confirmed that today of course, so I was feeling good out there on race pace.

Not the most exciting afternoon perhaps, and a disappointing one for a hugely enthusiastic crowd that had come to see Ferrari push Mercedes.

But take a look at that championship table – 250 points to 248 with seven rounds to go, and some tracks that traditionally produce excitement coming up, and where rivals should be in with more of a shout than they were in Italy. Nothing can be taken for granted.

“Some people were feeling a bit more confident coming to this track,” said Lowe. “It’s a power circuit, and we were strong last year. But I never come to a race with any confidence in anything, apart from that we should go in and do in our best.

“As you know, in this sport all sorts of things can arise, and you’ve got no better example than Singapore last year, where we really got it badly wrong.

"One of the big points of pride for the team is to go back and get it right. Now our heads are on the block to test whether our analysis is correct...”

Insight: Next 48 hours decisive for the future of Formula 1 ownership