Analysis: What McLaren's test parts tell us about its plans for 2017

We may be in the technical winter of this season but with a vast aerodynamic rule change coming in for next year we are starting to see some green shoots as the teams start to test parts that could indicate the direction they're heading in.

Mercedes has already tested a new front wing concept which we covered back in Malaysia, taking cues from a trend initiated by Toro Rosso whilst others have gone on to assimilate the design too.

Like the open-ended rear wing endplate louvres we've seen these teams use, the Mercedes front wing solution detached the mainplane from the wing's footplate to change its aerodynamic intent. 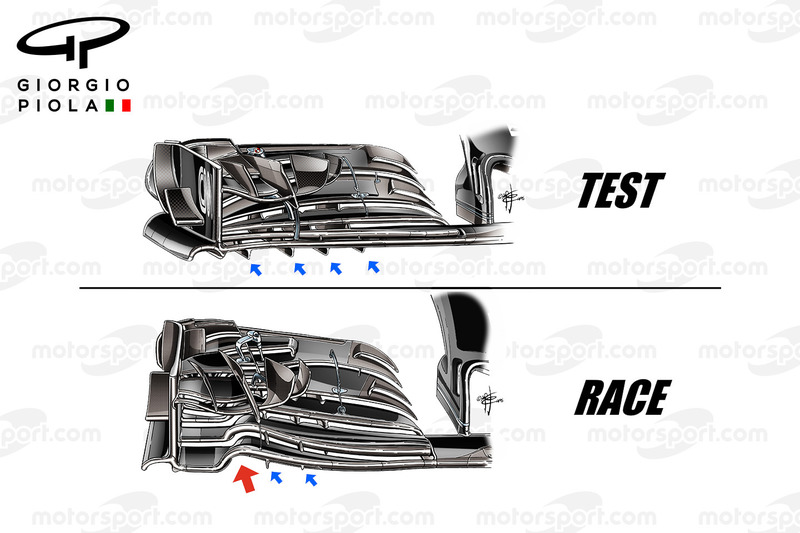 In Austin it was McLaren's to show us a different front wing, with the team eager to test a solution that may help it to better understand the airflow's behaviour relative to the 2017 regulations.

For years now, teams have been shaping the leading edge of the mainplane to guide airflow under the wing, with arches of various geometries and numbers used to corral the airflow in a way that is conducive to the control of the vortices being generated.

However, this test wing used by McLaren does away with that concept (see red arrow), favouring a broad curvature of the leading edge from the juncture with the neutral centre section all the way to the footplate.

Meanwhile, the second element of the mainplane, defined by a slot that runs the flap's entire length, is found to be at even more of a negative angle of attack than would ordinarily be the case at the juncture with the endplate.

Clearly, the flaps that follow have also been reshaped, as they are no longer provide airflow in the same way and also terminate at the endplate juncture, rather than forming an inner footplate first.

The underside of the wing is also treated differently, with four strakes emanating from the mainplane, rather than the three used in their latest 2016 specification wing (blue arrows).

Although, this shouldn't be confused with a trend, we'll see with next year's wing as strake frequency can vary, with the current iteration case in point, as McLaren has used wings with various strake geometry and frequency this season.

That's because these strakes are just part of the overall design contingency, the wing and its performance must be looked at holistically and not defined explicitly by the sum of its parts.

Just like 2016, the wing designs of next year have the same goals: balance the downforce needed at the front end of the car with that at the rear and create flow structures that improve performance downstream.

However, the re-introduction of larger bargeboards change how much work the wing has to do to protect the floor and sidepods from the front tyres wake.

Since 2009 much of the work that has gone on in terms of front wing complexity has revolved around aerodynamic outwash structures, but the return of much larger bargeboards for 2017 means that some of these artificial structures can be dealt with by a physical barrier.

McLaren's investigation seems to point toward a relaxation of the outwash design, used to pull the wake away from the floor and sidepods, and hints at a more balanced use of the wing to control the wake generated by the front wheel. 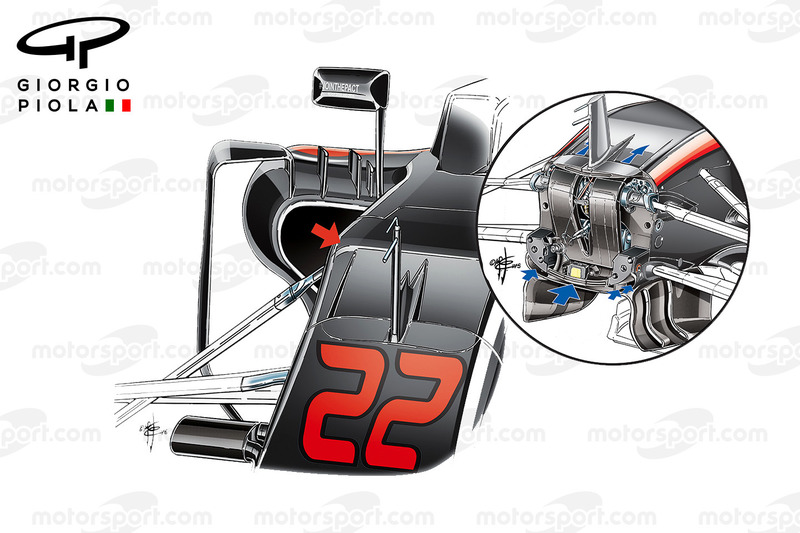 Another major talking point in recent races has been the chassis regulations, with changes made to the 2018 regulations to curb the aggressive cutout that we've seen Mercedes apply this season to great effect.

That's not stopping the teams looking at the exploitation of the region to gain performance for 2017 though, with McLaren applying flo-visualization paint to Alonso's car in free practice (arrow).

Flo-viz paint is used as a correlation tool to allow the designers to correlate the real world findings with those seen in their simulation methods, such as CFD and the wind tunnel.

Applying the paint around this area is not indicative of any radical design concepts they may have tucked away, but it is a pivotal region of the car from an aerodynamic perspective as the nose surface is anhedral to the chassis, leading to flow destabilisation and is one of the reasons 'S' ducts have been in vogue for the last few years.

McLaren has been using a rather elegant 'S' duct for the last two seasons (last year's MP4-30 inset), which features two outlets around the nose-chassis juncture and helps to keep airflow that might ordinarily detach from the surface attached with an injection of airflow into the boundary layer.

The other consideration around this area of the car is the front suspension elements, which depending on the aggression used for the chassis cut out could see the elements placed in significantly different places.

Mechanical suspension logic dictates that the suspension of a Formula 1 car may look very different to the type of layout that is currently being used, if it were not for the aerodynamic gains that can be made.

That said, it proves that kinematics may be skewed in order to gain aerodynamic superiority, something that all teams will be factoring into their 2017 designs given the additional loads that the suspension will see with the increased tyre width and weight.

Whilst tests were being conducted at the front end of Fernando Alonso's car the team focused exclusively on the rear of Jenson Button's.

The Brit's MP4-31 was equipped with several parts and sensors during FP1 that will help the designers back at Woking understand issues they may be having with this year's car and carry that learning across to the MP4-32.

The 2017 regulations see the diffuser expanded significantly when compared with the current dimensions as the height will be increased by 50mm and more importantly the length is increased too, starting 175mm ahead of the rear wheel centreline, rather than on it.

This, along with the other changes, give the designers scope to generate the level of downforce that is anticipated to reduce lap times by around five seconds per lap. 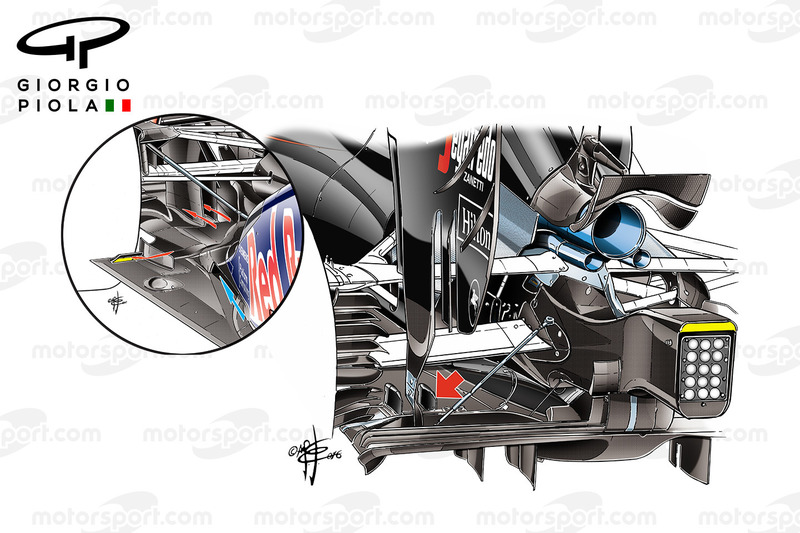 The diffuser mounted on Button's car was supplemented by two additional metal rods, supporting the trailing edge and using connecting points on the crash structure to brace it, as it ordinarily moves and flexes under load.

Keeping an eye on this were four sensors mounted inside aerodynamically neutral housings on top of the floor (arrowed), which bring to mind the fins run in that area of the car by Red Bull in 2012 (inset) and lest we forget that Peter Prodromou was at Milton Keynes at that point too.

Much like the distance measuring lasers used by McLaren on their front brake ducts a few races ago it's understood these ride height sensors mapped the diffusers ground clearance throughout the practice laps. The team also illuminated the sidewall of the diffuser, much like we've seen Ferrari do in recent times as part of their studies. 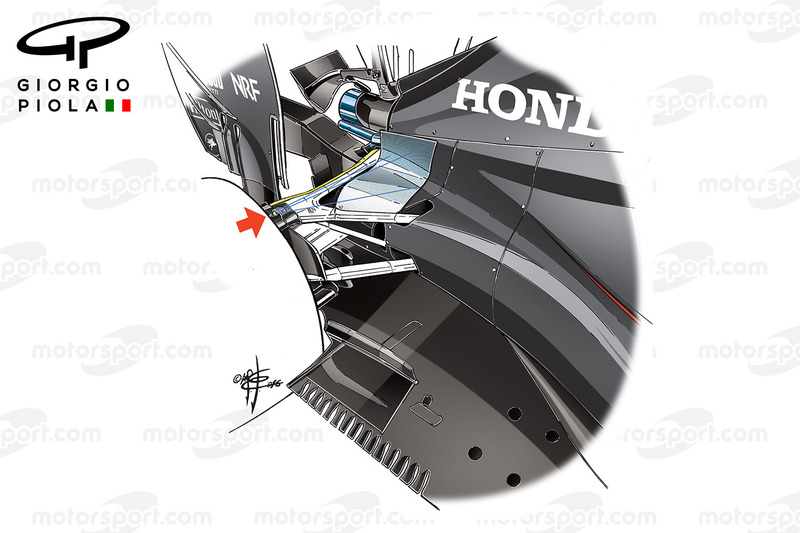 Meanwhile, cameras were mounted on the rear suspension uprights (arrowed) and looked across at the rear of the engine cover, where a fine mesh skin was applied to the engine cover in order to increase fidelity and increase the available reference points.

The team also briefly installed cameras that hung from the rear wing endplates, to look across at the exhausts, as the team look at how the heat, aerodynamic structures and exhaust plume in that region work the airflow.

The work conducted by McLaren comes too late to have a bearing on this year's car but the time sacrificed during free practice sessions this season will certainly provide the designers some fascinating insight into the development of their 2017 challenger.

Hamilton: "The moment you give up, you're doomed"