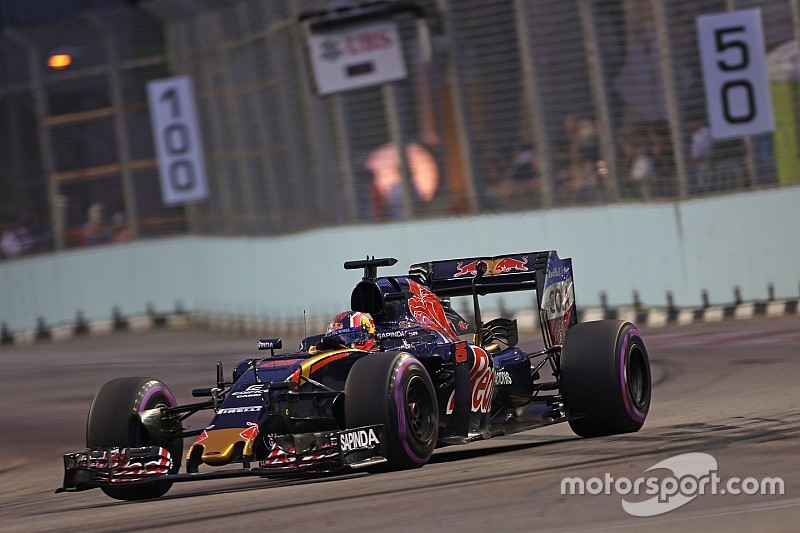 Toro Rosso has spent the last few races trying to work out why a major aerodynamic overhaul introduced at the German Grand Prix had not yielded results.

The bold changes – including a new front wing, bargeboards, floor and brake ducts – had been expected to deliver a decent step forward in downforce to help the team overcome a growing power deficit to its rivals.

But although the figures from the wind tunnel and CFD were promising, for some reason the progress was not being translated onto the track, and the team was struggling to see any differences in downforce or laptime.

Amid a conviction that there had to be explanation for what was happening, Toro Rosso elected to take the bold step of running its cars with split configurations at Monza and Singapore.

Daniil Kvyat ran with the old package and Carlos Sainz was given the new one throughout both weekends in the hope that finally some answers would emerge.

And although nothing obvious came to light – with the data still needing to be looked through this week – Singapore may have delivered a first answer: that the extra downforce has resulted in a lot of extra drag.

For despite there being little to choose in lap time between the two packages, speed trap figures showed that Sainz's B-spec version was much slower in a straight line.

In the official qualifying speed trap, Sainz was actually the slowest overall – his 300.1 km/h being a full 4.3 km/h slower than Kvyat. At the head of the field, Lewis Hamilton and Pascal Wehrlein were fastest overall at 315.4 km/h.

It was a similar story everywhere else the speed was measured. Sainz was slowest overall in a straight line in the intermediate sectors one and two, and comfortably down on Kvyat everywhere.

Here are the comparisons

Note: The speed trap is not located at the fastest part of the track

But despite the straight-line speed deficit, the Toro Rossos both got through in to Q3 and actually emerged as best of the rest behind Mercedes, Red Bull and the single Ferrari, which is a pretty amazing feat.

For Sainz, who has spent a great deal of time going over the data with the engineers, Singapore proved that Toro Rosso has brought plenty more downforce, but the extra drag that has come with it has not allowed it to show on track.

"I think the downforce is good, but we pay a penalty for that amount of downforce," explained the Spaniard. "But what we have on the car is perfect for this kind of track.

"It is pure downforce, not worrying too much about the drag and top speed. I am the slowest in the speed traps, I am the slowest everywhere, except for the corners, so it shows that in the corners the car is performing really well and we can be really pleased with that."

If Toro Rosso's package has indeed been hurting in terms of drag, then that would explain why the team suffered so much at tracks with long straights like Hockenheim, Spa and Monza.

Sainz added: "There could be something on the drag side that at places like Spa or Monza, it was not helping, but we need to check."

The final answers are likely to come at Toro Rosso's Faenza factory this week, as the team hopes that it can unlock the downforce benefits without being held back too much on the straights, especially with tracks like Sepang and Suzuka coming up.