Formula 1 hasn't seen anything like this for a long time: the near sell-out crowd at the Belgian Grand Prix has been gripped by Max Verstappen fever. 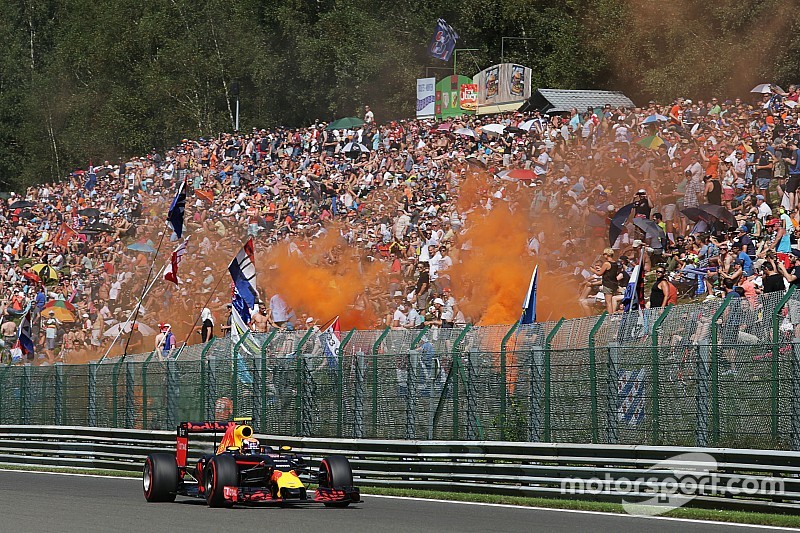 Packed campsites, long traffic jams, queues of fans at the gates, Dutch flags, orange shirts, and the odd smoke bomb have shown that 'Max Mania' is a force that has left everyone in grand prix racing buzzing.

An estimated 25,000 Dutch fans have flocked to Spa-Francorchamps to cheer on the 18-year-old and Verstappen's fan clubs are riding the wave the young Dutchman's spectacular arrival onto the F1 scene has delivered.

Bas van Bodegraven, founder of the GoMax fanclub, told Motorsport.com: "It's unreal. I hoped we'd get to 50,000 members this weekend but we've already surpassed that."

His club has had a regular presence at several grands prix, cheering on Verstappen to his maiden victory with Red Bull at May's Spanish Grand Prix. At the German GP, Dutch supporters took over a grandstand section with their orange attire.

"We would like to do that again at several tracks, but we'll have to find out if that's legally possible. We keep sending our GoMax flag with fans who travel to the races, so it's at every European Grand Prix.

"The best thing is organising events like these, so people can meet each other face to face, rather than just on Facebook. The bigger, the better. Our dream is for Max to come and meet with us. If we can organise that, we will have thousands of people."

For Van Bodegraven, who imports classic cars for a living, running the fan club has taken over his entire life.

"When Max won in Barcelona, I spent 18 to 19 hours a day running the club, for three straight weeks. I'm hoping to become a travel guide, so I can travel to the races with a nice group of fans. That would be a great career switch."

With hordes of Dutch fans taking over Spa-Francorchamps and Verstappen starting from the front row, a victory for the Dutchman would cause unprecedented scenes at the Belgian Ardennes.

"It would be a huge party, both here and back home," Van Bodegraven predicts. "It sounds strange, but that's why I won't be there. It will be mayhem on the group and we need people to moderate it.

"Me and my colleague will be at home to manage everything. At least there we'll have a solid internet connection…"

But has Verstappen fever, and the fan boost it has delivered at Spa, helped secure the future of the Belgian GP – especially with the event likely to have home hero Stoffel Vandoorne racing next year?

"We really think so," added van Bodegraven. "All tickets apart from bronze are sold out. And we should be happy about that, because I think this is the most beautiful circuit in the world.

"It would be great if Stoffel Vandoorne joined next year. There is no such thing as a Belgium-Holland rivalry. This isn't football after all."

Ferrari heading for another weekend of 'what might have been' as Marchionne demands results?