The demise of the Manor team on the eve of the 2017 Formula 1 season was a blow to Formula 1 and reduces the grid down to 20 cars - something that has not been the norm for nearly a decade.

The end of the road for Manor also came at a time when the outfit should have been close to the sign-off of its 2017 F1 car, with numerous images of its wind tunnel models emerging on the internet over the past few days.

Here, Matt Somerfield looks closer at the images to see what we can learn about what Manor would have raced in 2017 – and see what clues it offers for other teams’ concepts for the year ahead. 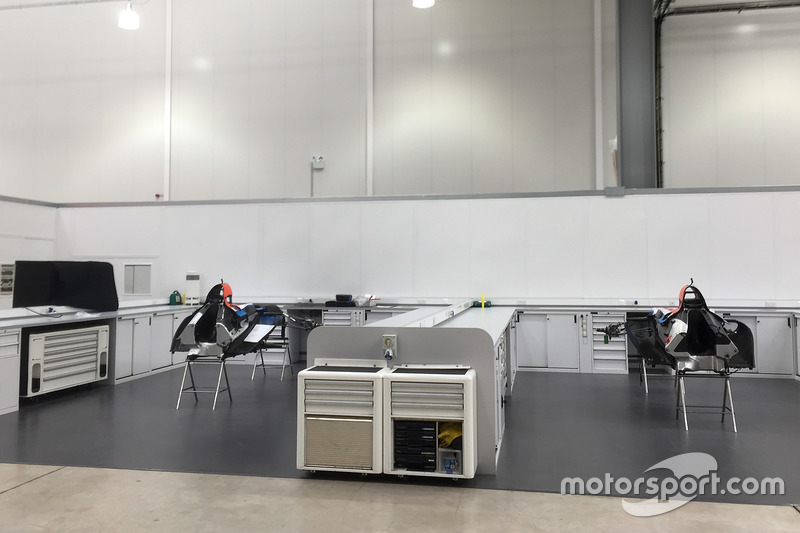 Both of the chassis designated for use during 2017 had already been constructed, and were positioned in their respective race bays at the factory.

But although the chassis were ready, little else was. For as the flow of money diminished, Manor's suppliers were put on hold in order to limit the financial damage of the team going into administration.

The design at the rear of the chassis indicates that, like the works Mercedes team has done for the last three years, F1's minnows had too decided to run a liquid-air cooler sandwiched between the fuel cell and front face of the power unit.

It is also understood that it had decided to move some of the electronics from within the sidepods to this crevice, in order to maximise aerodynamic performance from the cars flanks. 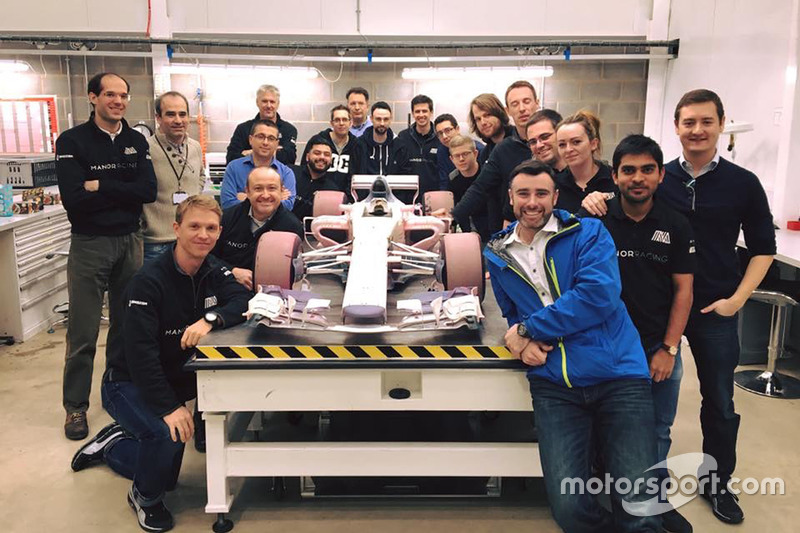 The MRT07 has been the focus of Manor's designers for some time now, and although all we have are some images of the lonely chassis and the wind tunnel model, there are still plenty of interesting design features.

The deltoid shaping of the front wing is a requirement of the new regulations, with the addition of a wedge shape forming the leading edge of the neutral centre section.

Just above it, the designers have set the wide shallow nose as far back over the neutral section as they can, rather than perched out over it like its predecessor.

The position of the nose, and perhaps more importantly the tip, has been a focus of the teams since the neutral section was introduced in 2009.

Their proximity and shape changes how the neutral section behaves, using it to generate downforce and improve performance downstream.

The front wing has been subject to numerous changes, taking into account the increased width of it and the tyre located behind.

A more aggressive out wash tunnel is complemented by numerous upper elements, with an outward turning 'r' cascade sat slightly inboard of a three element open-ended cascade, with lower surfaces curved to match those of the flaps below.

This is a design feature we've seen employed by both Williams and Caterham on the FW36 and CT05 respectively, and has likely been revived by a need to break up airflow across the face of the tyre and push it out around it, given the new wider dimensions.

The outwardly curved end plate is also furnished with an up wash canard, assisting in this redirection of airflow around the tyre and improving the shape of the wake shed by the tyre.

The main plane is separated into two main elements and supplemented by additional slots above the curvature of the out wash tunnel.

Meanwhile, the upper flaps have been redesigned when compared with their 2016 counterparts - their tips meeting as the lower of the two is upturned to meet the other.

A similar design has been run by Renault in the past, and will have an effect on the Y250 vortex they're in close proximity to. The inverted L-shaped canards placed ahead of the flaps are also being used to manipulate the ferocity, shape, rotation and placement of the vortex as it moves downstream too. 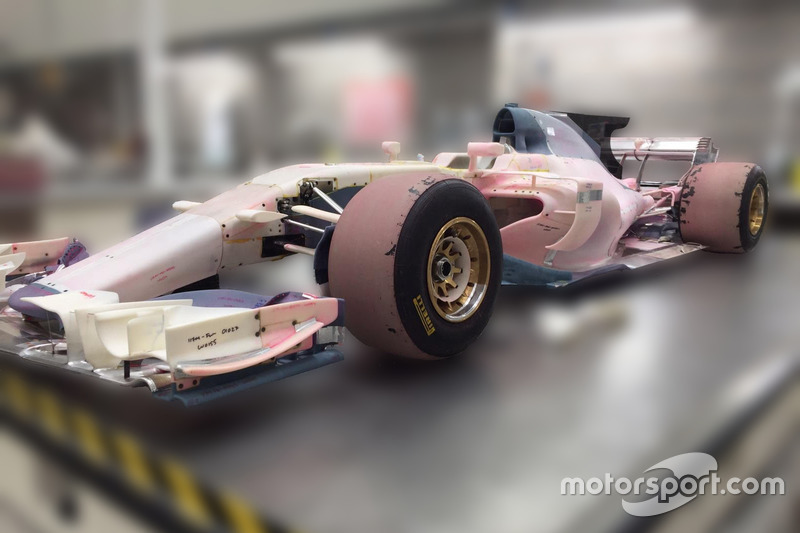 The wheels, now wider to meet the regulations, will be an area of development for the teams that will likely be a point of interest over the season.

Although there are still restrictions in place in terms of what can be done, there will probably be moves to employ more complex structural designs to improve aerodynamic impact.

The delta shape of the sidepod has expanded the role of the bargeboards for 2017. The ones on the Manor windtunnel model wrap around the sidepod's front face, and meet with an extended axe head section on the corner of the floor.

Their forward most section draws alongside the car's splitter, and the serrations help to improve the relatively larger surfaces efficiency - whilst the leading serration curves over to form both a support and a horizontal aero surface.

The sidepods, which have grown in width to suit the car's overall girth, allowing the team to play around with the orientation of the radiators and intercoolers to improve internal airflow efficiency.

They are still flanked by an upper leading edge slat, stretching from the cockpit and mounted astride a single vortex generator, before curving around the sidepod's shoulder and finishing several inches above the floor, in a similar fashion to the appendages used circa 2005-08.

You may also note how much further the slat and conditioner sit away from the sidepod's surface in comparison with the trend that has been applied in the last few years.

Having reached their maximum width at the front, the sidepods swiftly taper around the internal structures toward the cooling outlets, which are raised to improve the undercut and expose the floor.

The tyre squirt deck ahead of the rear tyre has two large L-shaped cut-outs, in order to shape the airflow as it is pushed laterally off the tyre into the diffuser, which starts 175mm ahead of the rear wheel centre line rather than on it like its predecessor.

The first thing you'll note toward the rear of the car is that 'shark fins' are back on the agenda, abandoned by teams after their connection with the taller wings that permitted the F-Duct was ruled out, as they could no longer fulfil the same purpose.

The shorter, slanted wings of 2017 once again suit their needs as they'll protect the rear wing from turbulent airflow generated upstream that could be problematic to the lower assembly, especially in yaw.

The lower, wider, slanted rear wing still has leading edge slots to take airflow inboard even with the regulated curvature of the new endplate surfaces.

Twin pylons support the rear wing, adding rigidity to the assembly that may have been lost due to the new geometry in place of the singular pylon sported by most teams last season.

Plus the open-ended louvres pioneered by Toro Rosso and subsequently used by several teams last season to displace the vortex generated at the wings tips also found their way onto the Manor challenger. 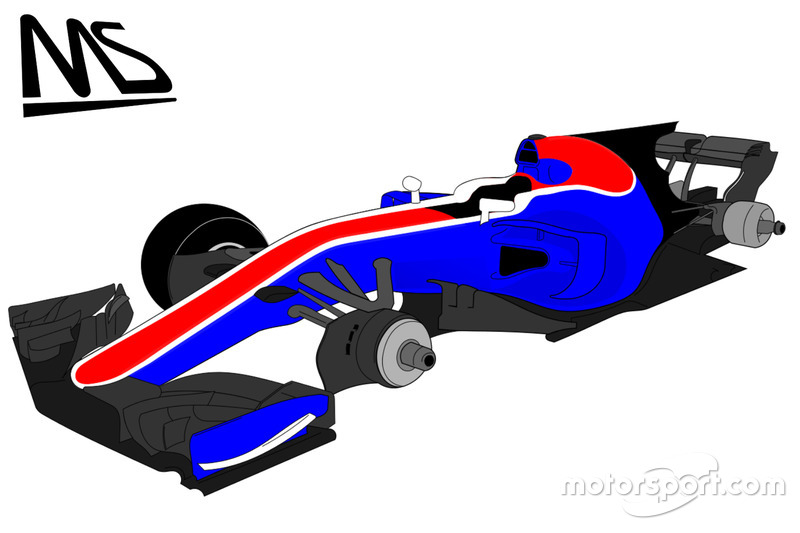 With the team's difficult financial position clear in early January, the team had begun work on the possibility of running an interim solution.

It would have required modifying the 2016 car – and work was underway on an interim solution that was going to be designated the MRT05B.

It is understood that the changes being made to the car included extending the bodywork to meet the new regulations – which meant a revised underbelly and wing pillars for the nose, a revised splitter and plank installation, bargeboards, sidepod upper covers, a new floor, rear wing and revisions to the height of the diffuser.

But in the end the work stopped when a buyer could not be found – bringing the curtain down on the team.

With a limited budget, Manor's planned MRT07 may well have been the car with the fewest details on the grid anyway – but it shows us just how complex aero development is likely to be in 2017 as we await launches next month.

And as our artists' impression above show, basing the 2017 plans on the 2016 colour scheme, we can only imagine what the car would have looked like.