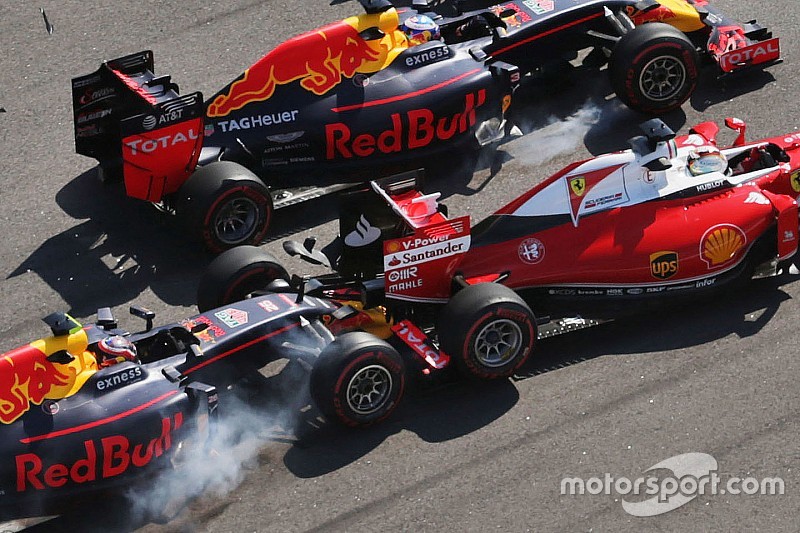 While Daniil Kvyat's disastrous Russian GP didn't help, it was far from the only factor in Red Bull's decision to promote Max Verstappen, as Jonathan Noble explains.

When well-informed sources dropped the bombshell on Wednesday that Red Bull's response to Daniil Kvyat's Russian GP nightmare was that he would be swapping seats with Max Verstappen immediately, it was hard to imagine such a draconian move would be given the green light.

Indeed, by the time Red Bull had confirmed the news on Thursday morning, there were many fans and leading F1 figures who questioned why a driver who just two races ago was on the podium had been replaced.

Jenson Button tweeted to his 2.5 million followers: "Really? One bad race and Kyvat's dropped, what about the podium in the previous race? #Shortmemories"

But while Button is right that the Kvyat/Verstappen move may be harsh based on pure results, the reality is that Red Bull advisor Helmut Marko's decision to pull the trigger was not just the response to one crazy afternoon at Sochi that he himself had labelled a 'disaster.'

When Kvyat was promoted to Red Bull for the start of 2015, it had partly been forced on the team through the shock departure of Sebastian Vettel.

Nevertheless, despite a difficult season with Renault and plenty of reliability frustration, Kvyat knuckled down, shone occasionally and more than justified keeping his place in the team for this year.

But amid the huge promise shown by Max Verstappen and Carlos Sainz during their rookie campaign, it was clear that Kvyat would have to step up his game in 2016 if he was not to face pressure to keep hold of his seat for next year.

As Marko warned in a pre-season interview with the official F1 website about the drivers: "Be very clear: the one who is not delivering goes."

For Kvyat, 2016 did not get off to the start he wanted, when in Australia he was first of all eliminated in Q1 after hitting traffic and failing to set a good enough time. Then on race day his car was left stranded on the grid because of electrical problems.

With him missing out on the mileage there, in Bahrain things got worse on the Saturday when a failure to get his tyres into the right operating window left him out in Q2 and fairly open that he appeared a bit lost.

"It's never been so... so strange in my career, to be honest," he said. "To be so happy with the car for the whole weekend, and suddenly comes qualifying and we are nowhere. It's a bit embarrassing even, to be honest."

Kvyat responded on race day as he recovered to finish in the points with a performance that the team hoped had lifted his confidence levels: although it was becoming clear that he needed a properly decent result to ease the pressure.

That success appeared to have come in China: as a well-executed move inside Sebastian Vettel at the first corner helped him pull off a podium finish that many suspected signalled the return of him at his best.

But what the result did not show was just how much better Ricciardo had again been as he recovered from the early puncture that cost him the lead.

Having been dropped down the order (even if the safety car had negated much of the 30 seconds he lost in replacing tyres), Ricciardo not only recovered to finish fourth, but he was less than seven seconds behind his teammate at the flag.

So when it came to analysing, in the wake of Russia, just how Kvyat was stacking up, the podium finish in China was not actually the game-changer in showing he deserved his seat that some have assumed.

And a look at qualifying form showed that the gap between Ricciardo and Kvyat had grown this year.

For comparison, last year (on times and excluding Italy when Ricciardo stayed in due to a penalty, and Japan when Kvyat demolished his car) the score was: 11-6 to Ricciardo, with an average relevant gap of 0.216 in the Australian's favour.

But irrespective of what Kvyat was doing, Red Bull has been facing extra pressure from the almost unstoppable career rise of Verstappen.

The Dutchman's talent had been clear to see ever since he stepped foot in a racing car and, although there have been moments of big learning (Monaco 2015, Australia 2016), no one had any doubt that Verstappen was going to be pushing on for a jump in 2017.

Indeed, ever since Verstappen arrived in F1, there have been suggestions that his contractual situation was pretty clear: the third year of his three-year contract with Red Bull would be at the main team or he could be a free agent.

With potential seats available at Mercedes and Ferrari for next year, the possibility of rivals coming knocking was something that needed to be headed off, so it was always clear that it would look at any opportunity to trial Verstappen if it became available.

Furthermore, there has been evidence of Verstappen's frustrations about not delivering the results he had hoped for.

In Australia there was that very public radio criticism of the team after their strategy calls over the second half of the race, while in Russia last week sources suggest that Toro Rosso team principal Franz Tost was angered by some strategy calls made on the Dutchman's side of the garage in qualifying.

Then, on Sunday, more points slipped through Toro Rosso and Verstappen's hands thanks to an engine failure: at a time when they know the pressure to deliver results before it loses out to rivals getting engine upgrades.

Kvyat's woes, the potential to check Verstappen's form against Ricciardo mid-season, Red Bull's need to maximise form when its Canada engine upgrade arrives, and the chance to stave off rivals trying to lure the Dutchman away for 2017 in the end proved to be a perfect combination of reasons for the swap.

And as harsh as it may seem for Kvyat, he knows that F1 can be a ruthless place at times, and at least he has a chance to redeem himself at Toro Rosso still rather than be totally cast aside.

How they stack up

Since they teamed up at the start of 2015, Ricciardo and Kvyat have enjoyed similar results on race days: even if in qualifying the Australian had enjoyed the edge.

Here is how they compare over the 23 races they were teammates.

Opinion: Kvyat dropped: Is Red Bull at risk of repeating history with Verstappen?