Analysis: Is F1 on the verge of a digital revolution? 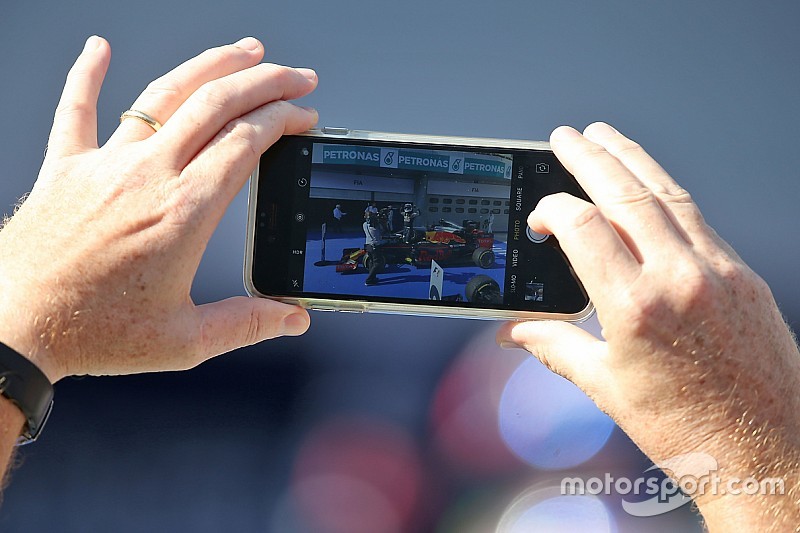 Formula 1's never-ending technology drive is not restricted to the cars on track, because it includes the way that each and every one of us consumes the sport too.

The ever-changing media landscape means that how fans watch F1 has changed beyond all recognition in less than 20 years.

For although Bernie Ecclestone faced a fair bit of criticism for his reluctance to embrace social media and the internet, one area where he was not shy of pushing things was in the way the sport was broadcast.

Yes, his fingers got burned when his Digital Television idea in the early 2000s was well ahead of what fans were willing to fork out for at the time, but that has not stopped him making F1 future proof when it comes to the way it is produced and distributed.

At the forefront of that effort has been global giant Tata Communications, which has worked with FOM since 2012 in pushing to improve the technology and the way F1 is broadcast.

The proof of the success of the partnership came last week when it was announced that MotoGP/WSBK promoters Dorna has completed its own deal with Tata to use the F1 concept of a connected broadcast strategy.

The deal includes the distribution of all content for Dorna's 80 media partners through its fibre and satellite network, and the exploration of new technology in UHD, and 360-degree cameras.

There will also be changes behind the scenes too thanks to benefits that Tata brings. For example, the days of needing to fly a bunch of production staff around the world to work at events have been consigned to history, because the technology and speed of data transfer means a lot of the work can be done remotely back at base.

In F1's case that means staff at Biggin Hill, while in Dorna's case it means a new broadcast hub in Barcelona.

For fans, the most interesting aspects are in what they get to experience at home. The step up to UHD – which Sky in the UK is broadcasting F1 in for the first time this year – will help improve the watching experience.

But there is one area Tata is working with Dorna and FOM that could completely transform how we all follow F1 in the future – and it has been a big buzzword in media circles for a while now: OTT.

OTT – alternatively knows as 'Over-The' Top – is the term used for the direct delivery of broadcast content via the internet. It's the Netflix/Amazon Prime model, where you subscribe directly rather than through a traditional cable or satellite Pay-TV service.

For sports' commercial rights holders, being able to offer a direct to consumer subscription service is a way to open up connection to a wider audience and increase revenue – as well as being able to offer fans more of the type of content they want.

No longer hemmed in by broadcast schedules, an F1 OTT experience could offer fans a whole new level of coverage that is custom-made for them - perhaps focused around their favourite team or driver.

It is something that F1 has been pondering, while MotoGP has its own system up and running. A full season of its VideoPass service – which includes every track session live plus extra videos – costs £179.

With F1's new owners Liberty Media eager to expand the sport's digital offering, is F1 then on the verge of a bit of a change of emphasis?

The limiting factor in the past for live OTT has been technology, because it is a very complicated thing to get right in ensuring broadcasts are actually live.

In years gone by, if a live broadcast on television was a few seconds behind the real event then it didn't really matter that much.

But with many fans watching sport with second screens, it is essential that what they are seeing does not suffer lag – for having an Ipad screen languishing a few seconds behind what is shown on television is a complete no no.

On the technology front, Tata says F1 is now ready for a full-on OTT system, having successfully trialled both a UHD broadcast and a live OTT service at last year's Singapore Grand Prix.

Tata's managing director of F1 business, Mehul Kapadia, thinks that his company now has the systems in place to deliver what the fans wants with an OTT concept.

But just because the technology is there, it does not mean that the switch to an OTT service for F1 is immediately possible.

For the big bucks paid by many television companies for F1 rights comes from them being guaranteed exclusivity in a set market.

In the UK, for example, if you want to watch every single F1 race live then you have to subscribe to Sky. And Sky well knows that its chance of luring fresh subscribers will be weakened if there is suddenly an option for fans to go direct to F1 Management for an OTT service.

Kapadia added: "OTT has a couple of answers needed from a commercial standpoint. This is a perspective from me – but it is a commercial challenge about whether sports franchises want to directly reach to consumers and then not have the scale that comes to them from broadcasters."

The transition from big money TV deals to direct transactions from fans could well take years. Plus, any potential move for F1 towards an OTT model will likely depend on what consumers want from watching sport over the next few years.

Will fans be happy with the traditional behaviour of just watching F1 on a television screen with a second screen delivering extra information/channels, or will a move to Virtual Reality or Augmented Reality force totally new experiences that current broadcasters cannot deliver?

Kapadia suspects that committed fans will increasingly want to become much more absorbed in the sport they are watching.

"In terms of where the market seems to be headed for, it is, how can it become more immersive? And while some part of that immersion has been solved by what sort of data you can get on your second screen, I think fundamentally your primary viewing experience, irrespective of the screen size on which you are doing it, that in itself needs to give you a higher degree of immersion, a higher degree of choice in terms of how you want to view it, and a higher degree of what are the kind of data points that you now want to look at.

"I think that is something that all sports need to be able to look at – whether you are watching football, F1 or cricket, the entertainment value is coming from being immersive and closer to the sport."

For technology companies these are hugely exciting times where there will be new avenues opened up by that need to please the consumer.

For F1, with Liberty so eager to expand its digital horizons, big change could then be on the way.

"Loads of opportunities are still there, and there are so many things that we can work on," added Kapadia.