Analysis: How the SC robbed fans of a Hamilton vs Vettel epic 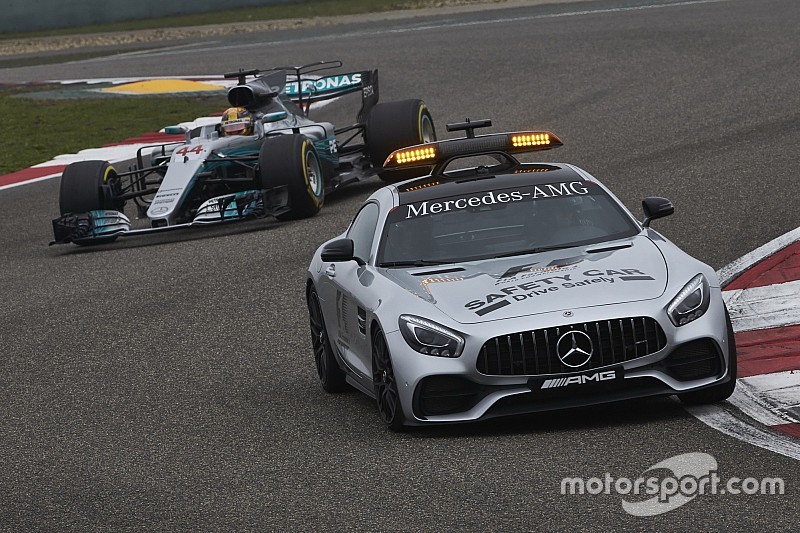 The Chinese Grand Prix saw some fabulous wheel-to-wheel racing and some strategic intrigue. But had it not been for that early safety car, Sebastian Vettel's gamble to pit for slicks may have provided a real fight for victory.

Two races into the 2017 Formula 1, season and it's already clear that we have a finely-poised battle, with Lewis Hamilton and Sebastian Vettel on equal scores, and their teams just a point apart.

Things could have gone badly wrong for either man on a tricky Sunday afternoon in Shanghai, but both demonstrated their proven class as multiple-time world champions and finished well clear of their troubled teammates after an entertaining race.

The prospect of rain on race day created much uncertainty for the teams, especially given their collective lack of knowledge of the new wet tyre, changed to a softer compound since the Barcelona test.

It turned out the track dried over the lunch period anyway, and wets were no longer on the menu by the time the race started.

Instead, as the start drew nearer, it came down to a question of intermediates or slicks, with some even trying the latter on reconnaissance laps before the pitlane closed.

It was the still-slippery grid that made inters the tyre of choice, with only Carlos Sainz taking the gamble on slicks. The Spaniard's decision appeared to have backfired when he bogged down off the line and dropped to the back, and also had a couple of early off-course excursions – but in the long run, it would pay off with a solid seventh place.

Meanwhile at the front, they got away more or less in formation, with Hamilton ahead of Vettel and Valtteri Bottas, while Daniel Ricciardo got ahead of Kimi Raikkonen for fourth.

An almost immediate virtual safety car period, caused by Lance Stroll's vault off Sergio Perez's front wheel into the gravel trap, created an opportunity for an early change to slicks – but the only frontrunner to take it was Vettel, convinced that he could make it work.

The two Mercedes, the two Red Bulls, and Vettel's teammate Kimi Raikkonen all stayed out, but everyone else decided to follow the German in.

Would that bold switch have been a decisive, race-winning move for Vettel? We never found out what he could do with what he was convinced was an advantage on slicks because just after the VSC ended, Antonio Giovinazzi's crash brought out a full safety car, encouraging the leaders to head straight into the pits.

And frustratingly for Vettel – and for any hopes we had of seeing the order shuffled around – the location of the wrecked Sauber also meant that all following cars were funnelled into the pitlane.

The leading cars should have been in the pits changing tyres, while Vettel headed down the main straight already equipped with slicks. Instead the top five were in effect protected, so Hamilton, Ricciardo (who didn't actually change tyres until the second trundle down the pitlane), Raikkonen, Verstappen (after a brilliant start from 16th) and Bottas (having lost three places with a pitstop glitch) emerged in that order.

Vettel had no choice but to follow them out in sixth.

"The safety car came just when I was about to start to feel that the dry tyre was a lot quicker," he said. "So I couldn't use the momentum, the advantage, and I lost a lot of positions."

He had a lot of work to do. Given how much performance he showed over the rest of the afternoon, it would have been interesting to see how things have turned out had Giovinazzi not triggered that safety car.

Bottas in a spin

There was then another twist as Bottas spun behind the safety car when his efforts to warm up his tyres got a little too enthusiastic. The second Mercedes therefore dropped way back to 11th, opening up the battle at the front.

Once the green flag flew at the end of lap 7, the real race began, with Hamilton running ahead of Ricciardo, Verstappen, Raikkonen and Vettel. It was a magnificent sight for a few laps, especially as the Mercedes didn't disappear into the distance, as would have been the case last season.

Just to add to the fun, the two Red Bull drivers had opted for supersofts, while Hamilton and the Ferrari drivers were on softs. Given the lack of running on Friday, and the fact that heavy rain had cleaned the track since qualifying, no one could be quite sure how things would pan out.

This strategy split guaranteed some extra intrigue, with the potential for Ricciardo and Verstappen to find some extra pace, and for the others to run longer. Mercedes had put Hamilton on softs because it opened up a bigger window, allowing him to stay out and react as necessary to what his rivals did.

Red Bull went for the supersoft because the RB13 wasn't comfortable on the softs.

Ricciardo lost out first to the flying Verstappen, and then as the Dutchman edged away, he came under huge pressure from the Ferrari drivers who were fighting amongst themselves.

Ricciardo was helped by the fact that Raikkonen was struggling, and thus not in a position to blast past. But once Vettel got by the Finn on lap 20 he took just two more laps to dislodge Ricciardo in a fabulous battle that saw the two touch wheels exiting Turn 6.

It was around this time that the radio chatter about the prospect of drivers on softs getting to the flag without another stop started – which would have represented a stint of some 52 laps for Hamilton and Raikkonen, and a couple more for Vettel.

Raikkonen asked his garage "do you really think that these tyres will last until the end of the race? Because it doesn't feel like it." Meanwhile, Hamilton was asked about the chances of getting to the flag, replying, "I think I can do it."

Hamilton was adamant that any discussion of getting to the end was genuine, and not an attempt to spread misinformation to wrong foot rivals.

A second stop was always on the agenda for the Red Bulls on their supersofts, and Verstappen became the first of the lead runners to pit when he came in on lap 29. He'd lost front grip and been caught by the flying Vettel, and was demoted a place amid a cloud of tyre smoke.

When told by his engineer that he had to pit, he replied with some understatement: "I can continue, but the left front is not so good..."

Verstappen was however able to take on a brand new set of supersofts, having handily saved three sets due to failing to progress from Q1.

Ricciardo pitted from fourth on lap 33, improving his situation by adding front downforce.

Clear of the Red Bulls, Vettel put in some quick laps, but he remained about 11-12 seconds behind Hamilton, who continued to bang in the odd fastest lap and didn't look like someone who was planning to take these tyres to the end.

The opportunity for Hamilton to pit opened up when Vettel came in on lap 34 to take a second set of softs to run to the flag. Usually Hamilton would have responded by pitting right after, but he risked coming out behind Raikkonen, who had yet to pit.

Mindful perhaps of what happened in Australia, when Hamilton was caught behind Verstappen, Mercedes left him out for a couple of laps to ensure that, when he did pit, he had sufficient margin to Raikkonen.

He would probably have had the pace on fresh tyres with which to get straight past, but it wasn't worth taking any risks.

It worked, and when he pitted he duly came out ahead of Raikkonen. However, he'd lost a bit of ground to Vettel, asking, "how's the gap come down from 12 to eight seconds?" He was told, "two laps of undercut, just waiting for Kimi to come out of our window."

Vettel had a question of his own, asking the Ferrari pit how much he would have to gain on Hamilton to be with him with five laps to go, which would have given him a reasonable amount of time to plot a passing move.

He was told the deficit was seven tenths a lap, which would have been an ambitious target even without Hamilton responding by banging in a couple of fastest laps, as if to make the point that he had little interest in being caught.

At the flag, the gap was 6.2s - not a lot in the context of the past three years of Mercedes domination, and hugely encouraging for the rest of the season.

The Red Bulls were some way back in third and fourth, Verstappen just staying in front of Ricciardo, but at least they had contributed to the show in the first part of the race.

Raikkonen and Bottas were just behind, but neither man could be satisfied with an afternoon that saw them finish so far behind their teammates, and with fastest laps that were half a second off.

Had Vettel not lost places when the Giovinazzi safety car came out, it would have been an even more intriguing afternoon. We'll never know how much the winning Mercedes had in hand, but it probably would have been close.

"At the end, the last 20-odd laps we were just pounding around as fast as we can, exchanging lap times," said Hamilton. "And I think that's what racing is all about.

"Perhaps in the future there will be times when we won't have a safety car and there won't be that six seconds gap, it'll be right on the tail either way. I'm excited for that."

For a full version of the Chinese GP analysis, check out this weeks's GP Gazette.