Analysis: How the FIA plans to ban T-wings

Following complaints from fans and many in the pitlane, Formula 1's Strategy Group and F1 Commission this week approved a plan to outlaw T-wings and shark fins for 2018.

But it has taken some careful thought to come up with a catch-all regulation that ensures this area of development is shut down.

The arrival of the extra large engine covers and high-up wings has been the result of a loophole opening up in the 2017 regulations that had not been there in original drafts.

And although some designers were reluctant to pursue the concepts because of the aesthetics, they knew that how a car looks matters much less than how quick it goes.

It has been pretty clear that having these fins and wings has helped improve handling in cornering – as the side force being generated helps stabilise the rear of the car when it yaw. There has also been a noticeable increase in downforce too.

How they came out

The rule change introduced for 2018 is a pretty simple one, but it was one that became necessary after the loophole opened up in the rules.

T-wings were not possible in the first draft of the 2017 regulations, but as changes were made elsewhere, the box area within the regulations reopened (Article 3.15.1), making the appendages permissible. 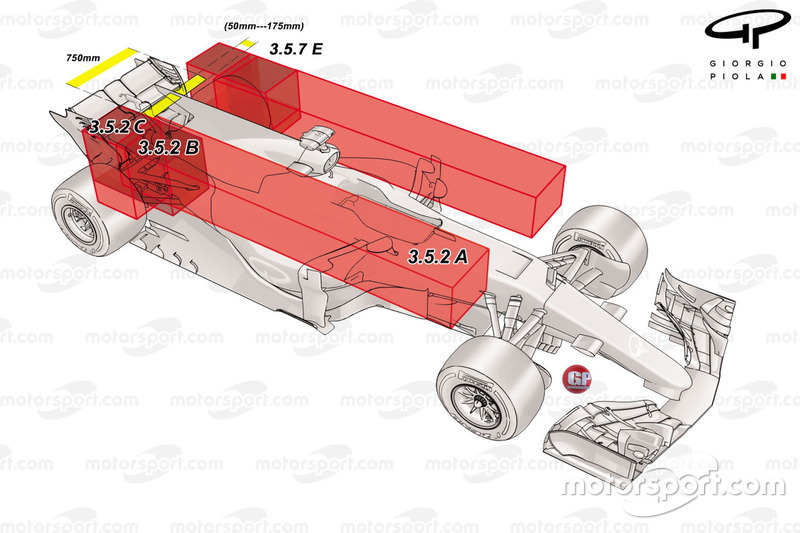 As the image above shows, bodywork was banned in the area marked red, but the wording of the rules allowed a 750mm wide area between these boxes to be utilised.

The T-wings currently occupy a 50mm space ahead of where the rear wing used to be situated, and can be a maximum of 750mm wide, encouraging teams to try out different configurations to suit their own needs.

In a bid to get rid of both the shark fins and the T-wings, the FIA has introduced a new rule that specifically bans bodywork in the area above the engine cover. 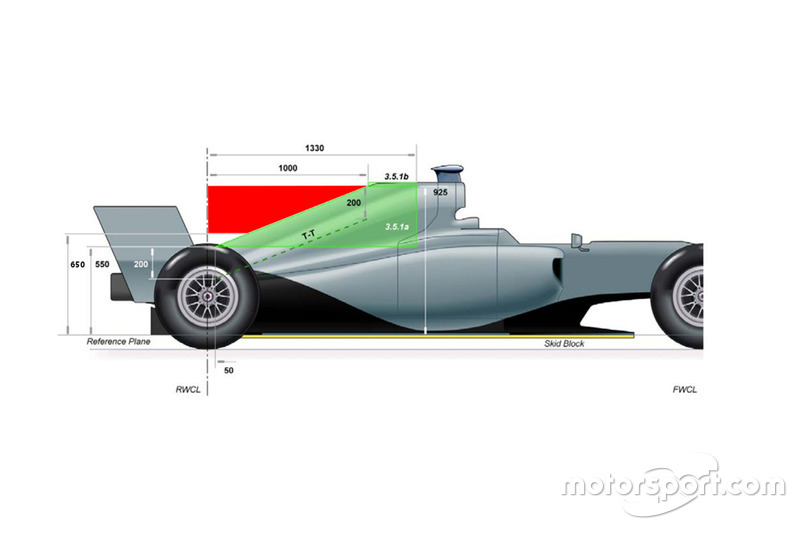 As the above image shows, a theoretical line will now be drawn above which teams may not be allowed to have any bodywork.

These simple sentence are enough to stop teams working on both shark fins and T-wings.

For now, the T-wings remain, however, and six teams currently run them – although that number may increase in Barcelona when teams bring their larger update packages.

It's also interesting to see just how different the teams' designs are. McLaren for example has a unique oval design, while Williams has placed two T-wings on its FW40 showing how multiple winglets can be used within the box section.

Here we look at the differences

Ferrari (upper left) was one of the first to unveil its T-Wing design, with the relatively simple profile offering a neat uplift in direct downforce. The downward turning tip is used to manipulate the rear wing tip vortex.

Mercedes (top, middle) is now a much more complex design than was originally revealed at the car's shakedown. In fact, it's the third iteration, with the first a simple single plane design like Ferraris, albeit with a much longer downturn at the tip.

During the pre-season test it revised the design to feature a twin-plane configuration with a longer downturning tip, much like an endplate.

The T-wing that arrived in Australia was a further refinement, creating a loop at the end of the planes rather than an endplate and a third, narrower, shorter chord singlet was added to the top.

Haas (top, right) has been using a T-wing since the pre-season test but had to make amendments to the stiffness of their shark fin in Australia (large arrow) in order to satisfy the FIA, which was concerned that the large oscillation that had been seen on broadcast footage could lead to the winglet becoming detached and posed a safety concern.

Williams (bottom, left) has been running with two T-winglets on the FW40, an upper and lower appendage as it looks to maximise the box section within the regulations, improving not only the rear wing's trade-off between downforce and drag but also bringing the diffuser into play.

McLaren (bottom, middle) entered the fray in China with what was supposed to be a tandem introduction of the T-Wing alongside a new rear wing. But the rear wing needed refinement to get working properly so may only feature properly from this weekend's Russian GP.

Sauber (bottom, right) has been toying with using a T-wing since Australia when a new engine cover appeared with the metal supports embedded in it. It used the winglet in China but opted to run without it again in Bahrain, before trialling it again at the post-GP test.

The ban of these aero surfaces for 2018 doesn't mean we won't still see development of the area during 2017.

In fact, many of the teams will have work in progress and we are likely to see them get further refined throughout the remainder of the season.

However, the FIA has already indicated that it may start getting tougher in terms of ensuring they do not flex, or risk coming off as has happened with Mercedes twice this year. So load or push tests could be increased over the campaign.

India to tax Formula 1 for past three races