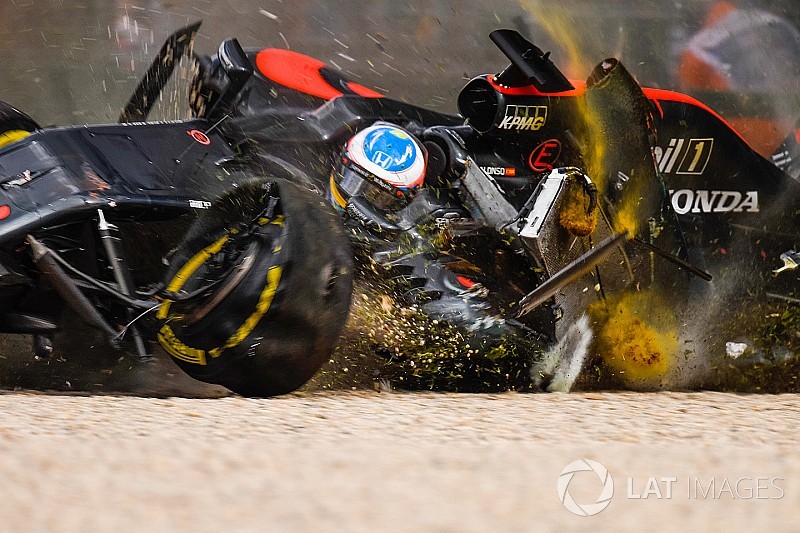 Last month's confirmation from the FIA that the Halo will be fitted to F1 cars in 2018 put a renewed focus on the efforts made by the governing body to improve safety in motorsports.

However, the Halo is just the tip of a very large iceberg – research is ongoing all the time, and improvements are constantly being made, but fans don't always get to hear about them.

It's been 23 years since the traumatic 1994 F1 season led to the FIA ramping up its safety efforts.

Max Mosley deserves much credit for that push, and for giving the late Sid Watkins, Charlie Whiting and their R&D experts the support that they needed to get things done.

The man who currently spearheads the programme is FIA safety director Laurent Mekies, who was chief engineer at Toro Rosso when Sebastian Vettel won the 2008 Italian GP.

"I guess it's the best kept secret, but it's completely normal business for us to bring improvements on a continuous basis to the cars," says Mekies.

"I'm not sure why, sometimes some of them get picked up in the press, and some of them don't, but at the end of the day we spend our year analysing accidents.

"We've gone to a great extent to increase our capabilities to analyse accidents by putting ADRs [accident data recorders] on the cars, by putting accelerometers, by putting high speed cameras, and not only in F1 – we have ADRs in 25 championships worldwide, FIA and non-FIA.

"This allows us to be able to develop the next generations of safety equipment and car characteristics. Of course, not everything we do comes from accidents.

"There is a continuous drive to raise the bar and push ourselves as a group, as a community, and from these two sources you get a large number of evolutions that are being requested all year long. If you go on our website, you see safety news, and see all the notes we publish.

"In F1 because everything is pushed so much to the limit, you have implications – as soon as you change something it has consequences for something else, so maybe you speak about it a bit more. But we do that all year long through the technical working groups of each category."

A few weeks later the FIA told teams and manufacturers across motorsport to modify their rear jacking points after it was determined that an "aggressive" design on the rear of the car the teenager hit had contributed to his injuries.

Although Mekies is keen to play down the Monger connection, it was a textbook example of how information is shared.

"It was not linked to one single accident, it had been on the radar for quite a bit. If you look at all the efforts we do to get a very fancy energy absorption structures on the front and rear of the cars, somehow we had kept that possibility – some cars in the world were putting an aggressive structure there for pit stop purposes, and we felt it was an unnecessary risk.

"We have seen many examples. They don't need to be dramatic, they can be low speed accidents where you see unnecessary damage. On that one I think once you pinpoint that issue to everybody in the pitlane, I think everybody understands straight away, 'Oh yeah, that should be fixed.'

Not all 2017 F1 cars were affected by the rear jack notification, but those that were modified for the Monaco GP.

"The teams have been great on that particular matter. When you see it, you say, 'That's true, we should get rid of it,' and therefore they did it very fast.

"I can only say we are very happy with their reaction, and how fast they could implement. I think it's an example for everybody – when we want to do things, we do it, and we do it fast. It's good to have a reminder of that sometimes."

Although fans tend to think of safety improvements tricking down from F1, lessons can be learned from all levels of the sport.

"As I mentioned with the ADR, it started in F1, but now it's in 25 championships. It is the same box that we spec across the whole board, so we get this data and we are able to learn from a WRC accident as much as from a V8 Supercar accident in Australia.

"Of course, they are all different cars, but when you have put in place a system where you have data consistency, you are able to use everything. It took years of effort.

"On top of that as the FIA we are structured with research groups, and in these research groups, everybody is participating – IndyCar, NASCAR, all the players are there, because it's about putting together what we know to make things better for everybody.

"So we share everything, we share our analyses about crashes, but also the work we do to move forwards."

It's inevitable that F1 provides the inspiration for many improvements, as it did with the ADR.

That's not just because the sport has such a profile, but because the teams have the resources to help the FIA to push research along.

The Halo is an obvious example – from the start the plan has been to have something that can eventually be used in all types of single-seaters.

"There would be no additional frontal protection without a possibility to put it into the other formulas. It does not mean that it is strictly the same versions, but as a concept, nobody will accept that only the top guys are protected, and this is certainly not the route we are favouring.

"F1 is the best possible environment to experiment and research these sorts of things, and so naturally this is where we are developing it, but the intention is obviously down the road to cascade it down."

Safety is a much discussed subject at F1 driver briefings and GPDA meetings, and Mekies appreciates the co-operation that the FIA receives.

"Drivers are very supportive of the safety effort, and we have a very direct relationship with the GPDA. We exchange a lot. It's not enough to have good ideas, if you are unable to convince the people around you that these ideas are good, and should be supported, then they are useless. So we spend a lot of time exchanging with them.

"The drivers have been very sensitive with the F4 accident, but also to karting accidents. The bottom line is luckily now the number of very serious accidents or fatal accidents is in absolute terms lower than years ago, and therefore each of them, when it happens, you must learn.

"And if you don't take that as one of your inputs, then it's difficult. So it's a completely natural process, I think."

The good thing for Mekies and his colleagues is that their efforts are always well supported by the teams – it's not like discussions about ways to make the cars more spectacular, where there are always many opinions.

"You're right, it's certainly easier, but at the end of the day even for safety you need to convince the people – nobody is wrong, nobody is right, it's not black and white. Where do you put the cursor between what the sport is, and will be, and what you want for the people involved in it?

So what about Mekies himself? For years his job was to make F1 cars go faster, but now he has a very different role – and one that he is enjoying.

F1 customer engine prices set to be lowest ever - Wolff