Analysis: How retro will Ferrari go with its 2016 F1 livery? 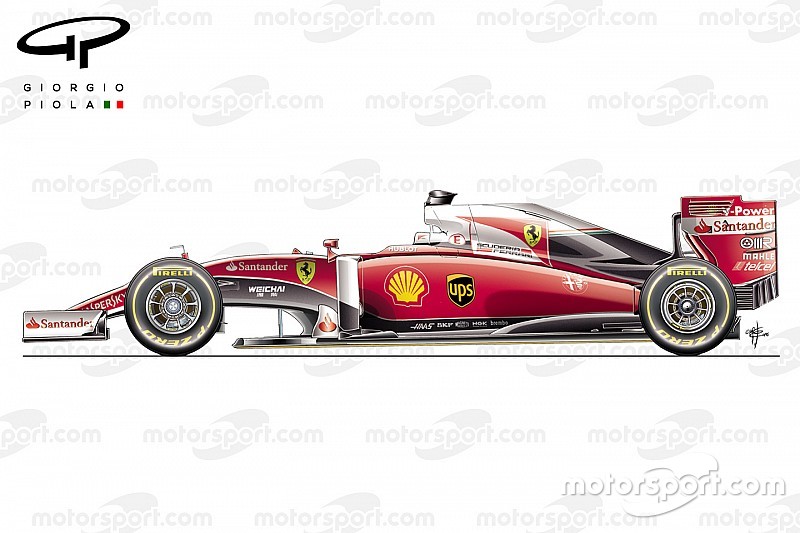 Ferrari's bid to return to Formula 1 championship glory this season has led to plenty of intrigue about what changes have taken place underneath the skin of its 2016 car.

But when the first images of its new challenger are unveiled – perhaps as early as this week – there could be one tweak that will get fans talking more than any other: the livery.

After many years of sticking to a red-dominated design, Motorsport.com understands that Ferrari will bring back some form of white banding around the engine cover that featured on its cars many years ago.

Just how far the move will go remains to be seen, and Giorgio Piola's exclusive illustration above shows how a contemporary car would look like with a 1975-style livery, but there are clear reasons why the team wants it to happen.

Break from recent past

Although the return to some white banding on the Ferrari has historic motivation, what the move signifies is a break from its most recent past.

After the Ferrari disasters of the early 1990s – when the white-banded F92A and F93A cars failed to win a race – then president Luca di Montezemolo demanded that the livery be banished to the history books.

When Jean Todt came on board as team principal, Ferrari's cars were returned to an all-red colour scheme - and as it entered an era of more success, there was little reason to contemplate returning to the liveries of the past.

There are new bosses in charge now though, and suggestions that the team wants to get itself back to the iconic place it held as a racing team in the mid-1970s.

Maurizio Arrivabene will certainly remember Niki Lauda winning the 1975 title in a white-banded 312T, which may well provide the inspiration for what Ferrari has done with its 667.

Video footage of Kimi Raikkonen's seat-fitting last week also suggested that the drivers' overalls would feature more white than they had up until last year.

But whether the team has gone the whole hog and chosen to go fully retro with its livery, or simply gone part way as a nod to the past, is being kept a closely guarded secret right now.

We will have our answers in a few days' time.

Analysis: Six things we will learn when F1 testing begins