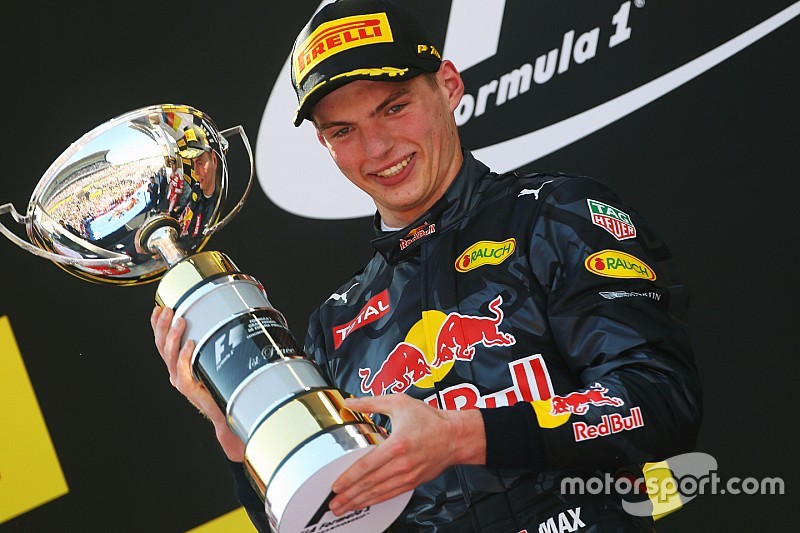 Max Verstappen's victory in Spain in his first appearance for Red Bull was an extraordinary achievement, and its full significance may yet take a while to sink in. Adam Cooper analyses how the fairy tale journey reaped into reality.

Of course the fact that the Mercedes team eliminated itself on the first lap opened the door for the Dutch teenager, but he still had to beat both Ferraris, and teammate Daniel Ricciardo.

Had it been a battle for third place, assuming that the two silver cars were away and clear, it would still have been a fascinating contest, and one that he fully deserved to win.

What made it so intriguing as the fact that we had two strategies at play, with both Red Bull and Ferrari splitting their cars between three and two stops.

It was always going to play out with those on the latter option having track position and being ahead in the latter stages, while those stopping three times would be catching up.

They would have fresher rubber, but they would still have to overtake. And as we know that is far from easy in Barcelona, even with a potential speed advantage.

Indeed, in its post-qualifying predictions Pirelli said that while the three-stopper would be the faster choice, the difficulty in passing meant that two stops would probably prove more popular.

And that's how Verstappen won the race, although the schedule he used was very different from the one Pirelli suggested.

While the tyre company proposed stops on lap 20 and lap 40, with mediums for a 26-lap stint to the flag, Max actually changed tyres on laps 12 and 34, and thus ran a marathon 32 laps on the mediums.

And those early stops were despite the safety car neutralising the track for three laps, and theoretically allowing people to run longer.

The crucial and clean start

So how did Verstappen win the race? His first job was to get the start right and stay out of trouble, no easy task given that each car requires different procedures, although he had some Renault knowledge from last year to fall back on.

With the Mercedes out he immediately slotted into second, behind Ricciardo. His erstwhile teammate Carlos Sainz did him a favour by getting ahead of both Ferraris.

After being humbled by Red Bull in qualifying, the Maranello team had a chance to make amends had its drivers enjoyed mega first laps, but that didn't happen. After the safety car went in, both men lost a little ground while trying to get past Sainz, giving the Red Bull guys a crucial cushion in that first stint.

Leader Ricciardo came in on lap 11, and Verstappen and Raikkonen followed a lap later, and at that stage all three still had their strategy options open.

However, Vettel stayed out until lap 15, and it appeared that he might be edging towards two-stop territory, although that didn't prove to be the case. Both teams were busy weighing up the options while second guessing what their rivals would do, and in the end both split their strategies.

"We obviously knew there was a chance to have a big score today after Nico and Lewis got together at Turn 3," said Christian Horner.

"But Ferrari has had a really competitive car this year and in free practice, and it was always going to be tricky to keep them behind us, and certainly in clean air they probably did have a car advantage over us.

"It is obviously pretty tricky to overtake round here, and that's why we elected to split the strategies, because it wasn't obvious after the first stop which was going to be the quicker route the three-stop or the two-stop.

"We felt that Sebastian in clean air looked to be the fastest car on the circuit at that time, and then it was a question of how are we going to beat Vettel? And we felt that by splitting our strategies from a team perspective gave us both options, because it wasn't transparently clear.

"We knew that a two-stop was going to be under a lot of pressure at the end of the race in terms of degradation," he added.

With 20-20 hindsight it's easy to say that at Red Bull, Ricciardo got the rough end of the deal, given that he was leading and ended up fourth and thus last of the leading contenders. In fact, the team gave the Aussie what at the time was believed to be the best opportunity to win the race.

"We felt that Sebastian once he has passed Carlos Sainz and was running in clean air you could see that his pace was stronger than ours," said Horner. "The obvious way that they were going to navigate their way past us was through a three-stop.

"So we had to take a tactical decision at that point to say, do we try and cover Vettel with one of our cars, and therefore the best car that we believed has got a chance of winning the race, which was the leader, and we elected to go for the three-stop. It looks like Ferrari made that same choice at that point in time."

One Red Bull source suggested that Ricciardo was using his tyres a little more, and that helped justify the three-stop, although Horner denied that was the case.

Ricciardo was just 1.1s ahead of Verstappen when he was pulled in for a set of softs on lap 28, thus committing him to three stops. Vettel covered that by pitting a lap later.

Verstappen, meanwhile, moved into two-stop territory when he pitted for mediums on lap 34, to be followed by Raikkonen a lap after that. Runs of 32 and 31 laps to the flag were a big ask for both drivers, but they knew what the challenge was.

"As soon as we pitted I knew we were going to the end," said Verstappen. "So the first few laps, I didn't really push. I knew the Ferrari was a bit faster than us today but I just let him catch up, and then you're just controlling the gap."

Of course it wasn't just about Raikkonen, because Vettel and Ricciardo were still in the game as well. Seb made an unexpectedly early third stop, coming in on lap 37 after just eight laps on his set of softs.

He was also only two laps later than his two-stopping teammate. Red Bull opted not to respond and instead Ricciardo went six laps further to lap 43 on his by now ageing tyres, while knowing that he would lose not just his place but a significant chunk of time to Vettel - over seven seconds, as it turned out.

But on the other hand his tyres would be six laps younger for the blast to the flag.  So the stints to the flag were as follows - Verstappen 32, Raikkonen 31, Vettel 29 and Ricciardo 23.

Vettel had only a marginal advantage on tyre life compared to the guys ahead, and Ricciardo – who had potentially more speed on tap – was compromised by getting caught behind the Ferrari.

"Ferrari then went very early on the last stint to try to get Sebastian track position," said Horner. "And obviously we pitted five or six laps later which gave him a much better tyre, but Sebastian didn't seem to be able to catch the leading pair as quickly as we thought, and he seemed to be in trouble in that last stint.

"Had Daniel managed to get past Seb a little earlier he obviously had a big pace advantage on the first two cars. It´s one of those things, it's very easy to sit here with hindsight.

"But at that point in the race it was far from obvious which was the quicker route to go, and we felt Vettel as the biggest opponent, we would take him on with Ricciardo."

While Ricciardo tried to find a way past Vettel, the German tried to keep the Aussie back while protecting his tyres, and Raikkonen found himself stuck in Verstappen's slipstream, the leader was able to control the race, despite being under huge pressure. The Red Bull had just enough speed to stay ahead of the Ferrari.

"We obviously ran a lower level of downforce here," said Horner. "You don't see what we call the monkey seat on the car, and we ran a slightly shallower wing angle.

"And we still managed to have very good traction out of the last corner here, which would always give him 0.7s at the start/finish line, and while Kimi was able to pick up the DRS and come on strong, it wasn't enough to pass into Turn 1.

"Max has obviously managed to look after his tyres incredibly well and make sure he had just enough left to fend off Kimi over the last five or six laps."

He made it look easy, but it wasn't. As noted, Verstappen had tried to protect his tyres, knowing he faced a marathon stint, but in the closing stages it became tough – the tricky bit was ensuring that he had a tidy entry onto the pit straight, and didn't lose momentum.

"To be honest I knew it was going to be very hard," he said of that stint. "But from there on you know you have to set your mind and try to control the tyres, especially the first 10 laps.

"Of course you are not pushing hard on them, you are just controlling it, and I have to tell you, the last ten laps, you are driving on ice. It's like driving on ice. Sliding a lot, but it's all about managing the last sector and get a good exit. I think that's how a lot of races are won here in Barcelona."

The boy had clearly done his homework! And it paid off as he stayed safely clear of Raikkonen.

"I think it probably was like driving on ice," said Horner.

"Because the stint was a really long one. We thought we were going to be through to the canvas, to be honest with you. He knew what the plan was at the point of the last pit stop.

"He was happy to have Kimi within a second of him, but still not overslip the tyres, not lock the brakes, not run too deep into a corner. And to have that degree of confidence and composure is usually the sign of a very bright future."

One final endorsement of his new superstar from Horner: "I think the biggest aspect of his performance has been his calmness. He's obviously got a lot of capacity when driving the car.

"We're all getting tense with five laps to go because the tyres were at the end of their life, with Kimi breathing down his neck with the obvious advantages where they had it.

"And he just very calmly came on the radio and asked, "Can you ask Charlie [Whiting] to deal with the blue flags swiftly?

"And there was no agitation in his voice, there was no panic, there was no tension, he was a young man completely in control of what he was doing. And that's what he's done since the moment he's stepped in the car..."