While Formula 1's leading teams Ferrari and Mercedes are separated by just tenths of a second at most, the gap behind them to the chasing pack is anything but small.

It is why Red Bull has fallen back into what it calls 'no man's land', as the qualifying performances from the first four races have left F1’s midfield shaking their heads.

The margin between pole position and the best of the non-Ferrari, Mercedes and Red Bull teams has averaged more than 1.6 seconds – it was 1.8s in Australia and China, 1 second in Bahrain and stretched to 1.9 seconds in Russia.

It is little wonder then that midfield drivers like Carlos Sainz have got so disheartened at the situation, because they know that, at best, all they can hope for if the top three teams finish is seventh place.

“For me they are in a different category,” the Toro Rosso driver said earlier this year. “I don’t even look at them. It is stupid.

"It is a complete joke the way that we don’t race against them any more. It feels for me a bit of a pain, but I am sure if I was in one of those two teams I wouldn’t mind, for sure.”

Closing up the grid 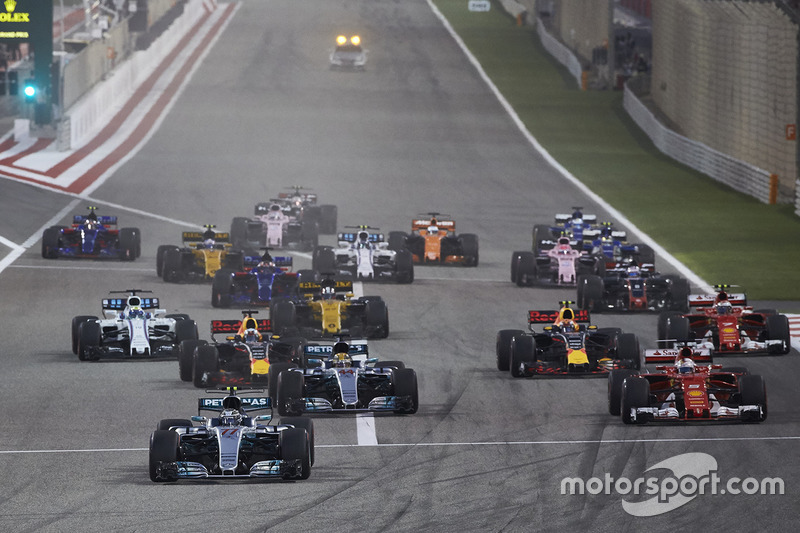 While the likelihood is that the grid will converge as time goes on, it is also true that Mercedes, Ferrari and Red Bull have more resources than other outfits – so the potential is there for them to extend their advantage even further.

Should the latter scenario play out, then F1 risks a more extreme two-tier F1 where only the rich minority have the chance of winning. And that will fly in the face of the vision of F1’s new managing director of sport Ross Brawn, who reckons teams like Force India should be able win races on days when they get everything right.

But how to achieve such convergence without imposing either gimmicks that fans do not like or rewriting the rules, which would come with the risk of opening the gap further?

As Williams technical chief Paddy Lowe said: “It is a fact that when you change regulations you tend to spread the grid. And, as regulations become more stable and older, the grid closes up. So one of the first casualties of a large regulation change is bigger differences down the grid. “

While the answer to make the field more competitive is certainly not simple, perhaps one possible solution could come from simply a new mindset: that of the F1 field being forced to end its climate of secrecy and to reveal more of its secrets. 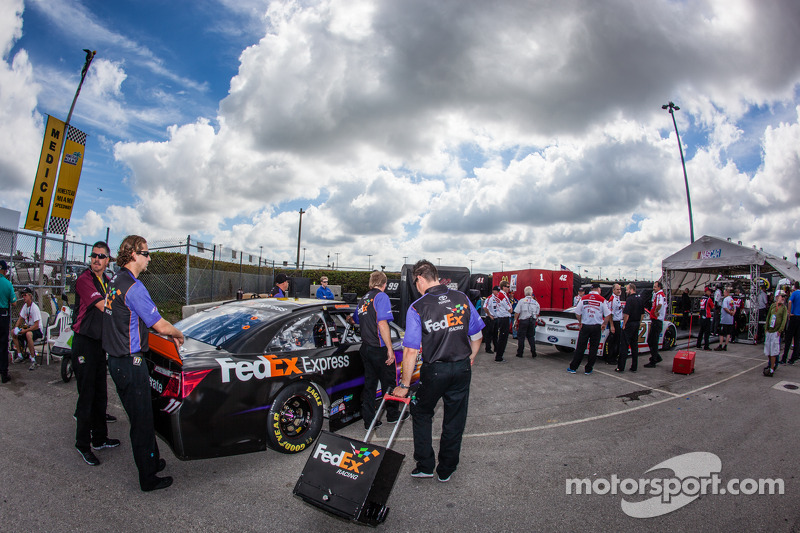 Speaking recently about changing directions for F1, Brawn brought up an idea that he was told about from NASCAR – a clever way that teams can understand what their rivals are up to, so that competitive advantages are not kept secret for long.

“I think that there’s a change of mindset as well within Formula 1 because there are opportunities that we shouldn’t be missing,” Brawn told Motorsport.com.

“You know, in NASCAR, as someone told me the other day, at a certain stage of the season you can go and look at someone else’s car and strip it apart and see what’s in it.

“And that’s their way of keeping everyone loosely competitive. And no one objects, no one has a problem. And it’s a philosophy that should be thought about.” 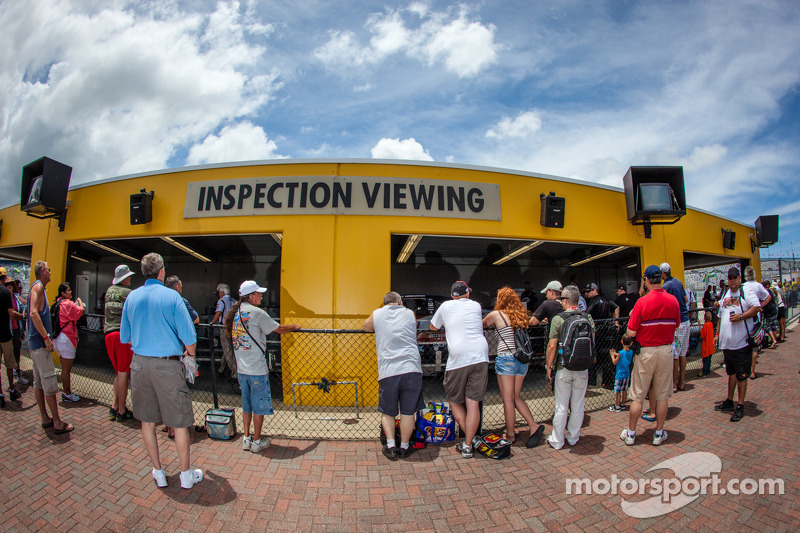 The actual scenario is more regular that even Brawn has suggested though.

For each week, cars must go through technical inspection prior to qualifying and the race, and then again following the race.

The entire process is held out in the open, where all competitors can witness what takes place at every inspection station.

In fact, many tracks now have brought fans into the picture, by placing some of the inspection stations near infield fan zones so spectators can watch teams go through the process as well.

In addition, each week NASCAR takes a handful of cars/trucks from each race (the winning car is always included) back to its R&D Center in Concord for a more thorough and intense inspection.

All of the teams there watch each other go through the tear-down process by NASCAR – and if anything untoward is found, then the secret is out in the open pretty quickly.

As NASCAR’s vice president for technical inspection and officiating, Chad Little, said of the inspection process at the R&D Center: "It's an open-door policy. So, any other team can come and observe. They're parked right next to each other just like they are in the garage; nobody covers anything up. When the parts come off, they're laid there for anybody else to see." 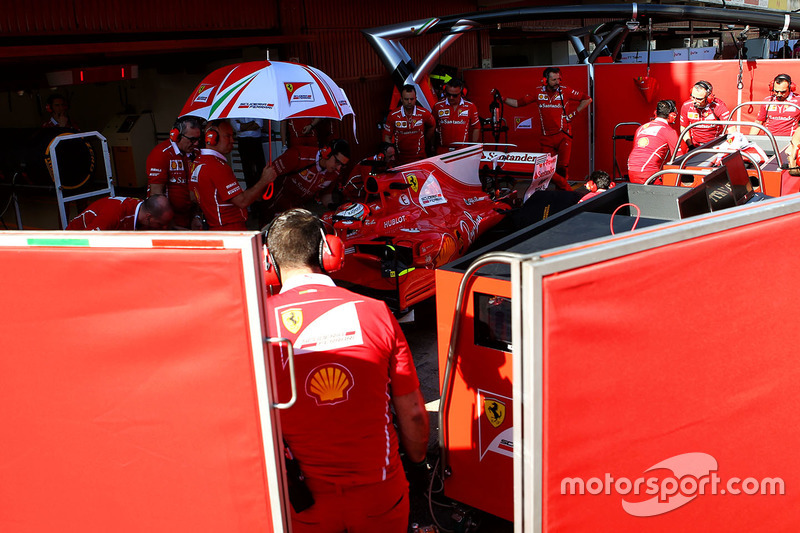 Kimi Raikkonen, Ferrari SF70H behind the screens in the pits

What if this was the case in F1? Imagine a situation where Honda’s knowledge of what was needed for a state-of-the-art power unit is fast-tracked by close access to what Mercedes and Ferrari had done, or where teams like Williams and Force India get a better understanding of suspension technology or aero concepts from looking at what an outfit like Red Bull was really up to.

For Haas team principal Gunther Steiner, who has previously worked in NASCAR, the concept of such open-door inspections is one he knows well – and he thinks it would lead to an acceleration of progress for smaller teams to help close up the grid.

Plus, it would be a better thing for fans, too, because they would get to see F1 cars close up and under the skin – rather than constantly experience them being hidden away behind screens and garage doors.

“I think it could work because it's a good thing,” he told Motorsport.com. “So at least people show the technology to the fan because that is what we have to do.

“We have a fantastic story to tell, but we keep it secret, because we don't want to show it. But if it's by regulations that you have to show it, then that is good.”

There is a school of thought that suggests F1’s popularity has been built on technology secrets, but Steiner thinks that introducing such open inspections would not stop the quest for development – it would just make things more even between teams. 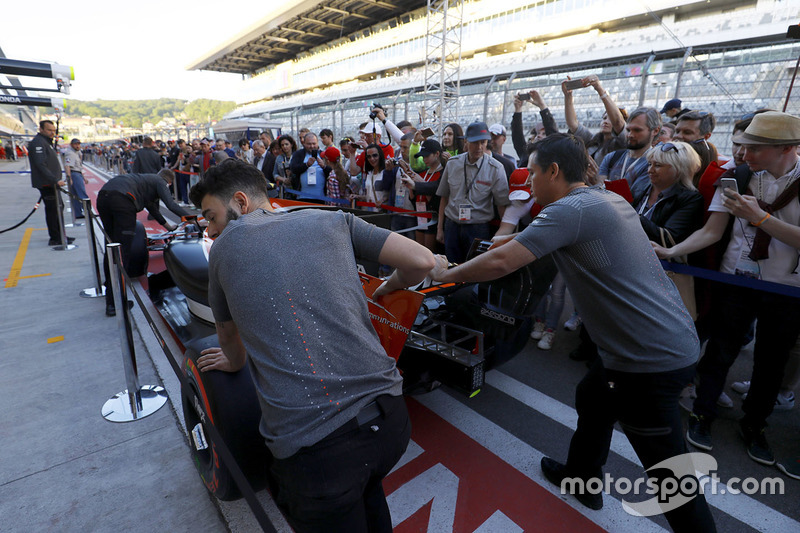 “I don't know if it stops the development, but at least people can look at it and it should equalise it, because you see it and you can do it as well. You still have to work hard, but at least the fans can see it.

“That is part of F1. If you want make it cheaper, then go to the cheap series. That is not what F1 is. It should stay at that high technology because that's part of the appeal, but we need to make it accessible for the fans.

“If we just do it for ourselves then you wonder why the hell you do it and people start to question it. I think it would equalise the engines a little bit more.

"It can be an advantage or a disadvantage. Some you win, some you lose, but I think it makes the field closer together. If you are first, you don't want it, but if you have to show it, you are forced to do it."

Steiner is right that the introduction of such a rule would not be easy to accomplish – with bigger outfits almost certain to resist any attempt to bring in something that could wipe away their edge.

But at a time when Liberty Media has talked about overhauling F1’s commercial structure longer-term to even things up, the mindset appears there for such bold changes like open inspection to be made in the pitlane to make things closer on the track, too.