Alpine: We need to “do better” to beat AlphaTauri to fifth

Alpine executive director Marcin Budkowski says that the team needs to “do better” if it is to beat AlphaTauri to fifth place in the Formula 1 World Championship.

Alpine failed to score in the US GP, with both Fernando Alonso and Esteban Ocon retiring in the latter stages of the race as a result of failures suspected to be caused by the bumpy Austin track surface.

Alonso started 19th and had an eventful race that saw him fighting with Alfa Romeo drivers Kimi Raikkonen and Antonio Giovinazzi.

A late third stop for fresh tyres was expected to give him a chance to challenge for points until he was forced to stop. Ocon was running well outside the top 10 when he was retired from the race as a precaution.

Alpine retains a 10-point advantage over AlphaTauri with five races still to run. The teams have scored 27 and 26 points respectively since Ocon’s Hungarian GP victory gave the Enstone outfit a big boost.

“It was just a poor weekend overall,” Budkowski told Motorsport.com. “Performance-wise, we're less competitive than our usual level. And then pretty much everything that could go wrong, went wrong.

“We're not happy about our weekend, and we need to do better if we want to fight for fifth in the championship going forward.

“There will be a post-mortem to next week. They are high speed sectors here, which were not usually the best at, and we knew that would be the challenge anyway. But I would lie if I said we're completely on top of our performance this weekend.” 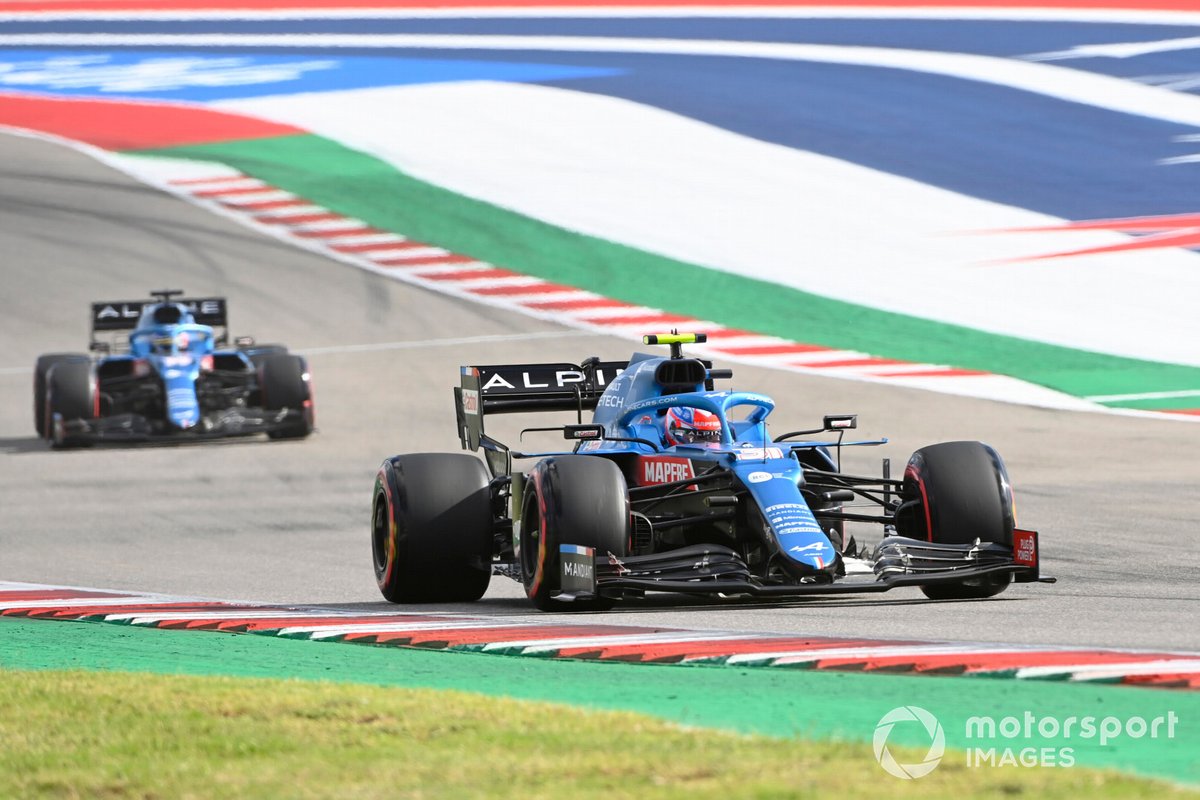 Budkowski said that the twin failures in the race had been unexpected.

"It was a wing issue on Fernando's, which was quite obvious. The investigation is ongoing, but it's an unusual failure.

"With Esteban, we're suspecting a problem at the back of the car. And given the position and the competitiveness at that stage, we just decided not to take any risks, and to stop the car."

Budkowski wouldn’t be drawn on whether Alonso’s issue could be related to a brush with a tyre wall that the Spaniard had earlier in the Austin weekend.

"If we changed it or not, we have methods of inspecting if there's any issue, and obviously we wouldn't have left a part that is suspicious on the car.:

Regarding Alonso’s fight with the Alfa drivers he said: "It was proper racing, there was probably a bit too much attention than needed on the track limits issue.

"But it just shows that the best way to close this issue is to have a clear line on it. And obviously Fernando didn't feel it was clear enough, and that led to more incidents than were necessary."

Budkowski insisted that the late tyre change would have given Alonso a chance to potentially break into the top 10.

“We tried everything to get him some points out of this race, including a slightly different strategy to try to build a tyre advantage at the end of the race, and unfortunately the issue we had with the rear wing robbed us of a pretty exciting end," he added.

“I think he would have been in that mix with [10th placed Sebastian] Vettel, exactly what Seb did is having a tyre advantage and managing to pick people off one-by-one.

“Difficult to know where he would have ended up, also without the Giovinazzi business he would have probably been better off. But the reality is we didn't finish the race. So it's irrelevant.”