Davide Brivio, the man who helped lead Suzuki to MotoGP title glory in 2020, has been linked with a shock move to join the rebranded Alpine Formula 1 team.

The Italian has earned huge respect in MotoGP, where his recent success with Suzuki has come after a lengthy career that delivered multiple world championships for Yamaha too.

Although there has been no official confirmation of the move nor his departure from Suzuki, sources have indicated that a move to a senior position within Alpine could be on the cards.

There is mounting speculation that a new team management structure at Alpine is being considered, with current team boss Cyril Abiteboul moving to a senior role within the Alpine organisation.

That could leave the door open for executive director Marcin Budkowski to take over as team principal, with Brivio potentially taking a CEO type role to oversee the wider operations.

Renault has issued a firm no comment about the potential infrastructure changes when asked by Motorsport.com.

The Alpine F1 team is undergoing a fresh push from Renault CEO Luca de Meo as part of his desire to reinvigorate the French car manufacturer. Last year he approved plans for the Renault team to be renamed.

Abiteboul had been tasked by de Meo in coming up with a battle plan for Alpine and, speaking about his future last year, suggested that it was not guaranteed he would stay as F1 team principal for the long haul.

Asked if he would remain team boss in the wake of his new Alpine responsibilities, Abiteboul said that his focus on doing what was best for the sportscar manufacturer meant he was only sure of remaining in F1 until the end of 2020.

“It’s a mission which I started, which I will have in hand in a couple of weeks,” he said.

“Part of the deliverable of that mission will see obviously some proposals in terms of structure that I absolutely do not want to comment on here and now. What I can tell you is that I remain in the context of that mission until the end of this year fully committed in my role as team principal.”

De Meo also hinted that it would be important for whoever took charge of the Alpine division to give it their full focus.

“We need to simplify the chain of command,” he told media at last year’s Italian Grand Prix. “We need to have responsibilities for the different parts.

“One thing to do is to develop a dealer network, the other is to run a Formula 1team, so you need someone who kind of pulls the ropes.

While a move to F1 for Brivio would be a surprise, he has history with de Meo, when the pair worked together during a spell at Yamaha’s MotoGP operations. 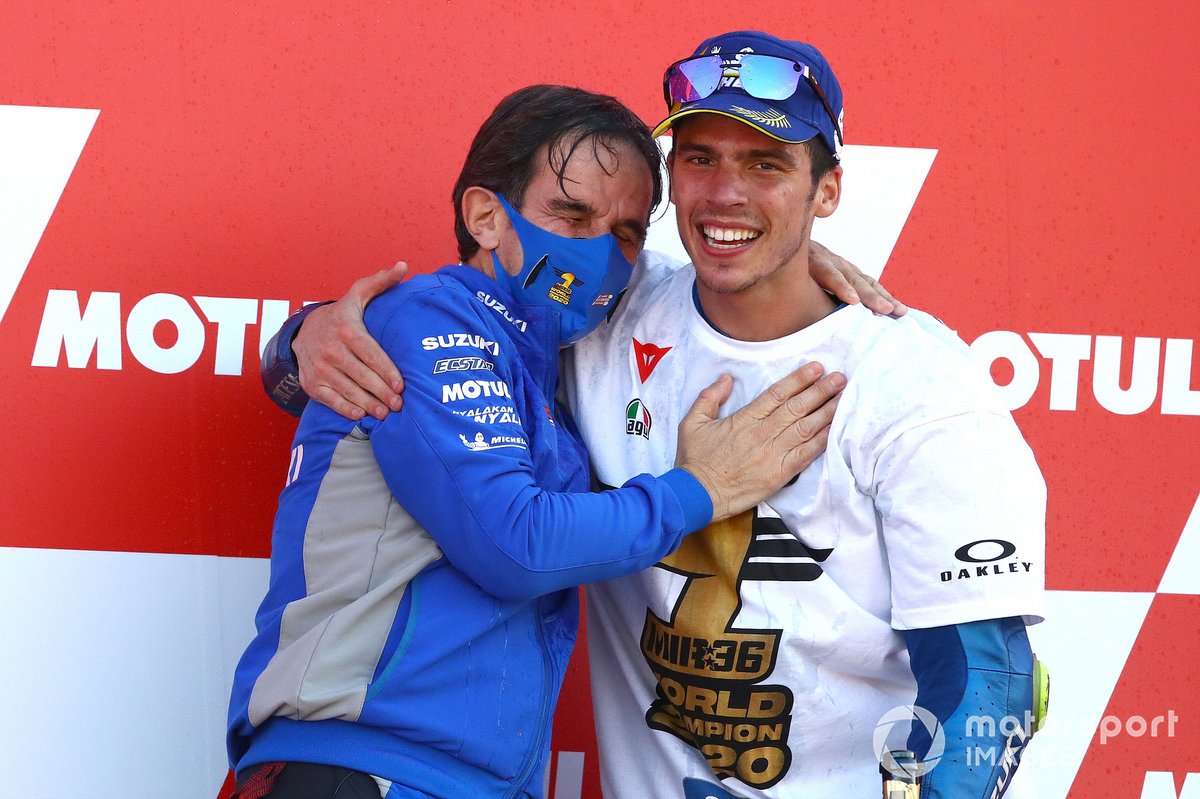 Brivio was team manager for the Japanese bike manufacturer at the time that it was sponsored by Fiat from 2007 to 2010, when de Meo was the Italian road car company's chief marketing officer.

Born in Italy, Brivio originally began his career with Yamaha in the World Superbike Championship in 1990.

He stayed with the Japanese bike manufacturer when it moved to MotoGP in 2002 and was instrumental in helping lure Valentino Rossi on board from 2004 - with Rossi ending a title drought for the marque dating back to 1992.

He remained there as Yamaha’s team manager until 2010, when he left the team alongside Rossi to work closely as part of the Italian’s personal staff.

In 2013, Brivio decided to return to an official team position as he took on the Suzuki team boss role as it prepared for its full-time return in 2015.

After helping the team win Suzuki’s first race in 2016 since its comeback, and making good progress, Brivio guided it to the teams' and riders' championship last year as Joan Mir won the title after a thrilling season-long battle.