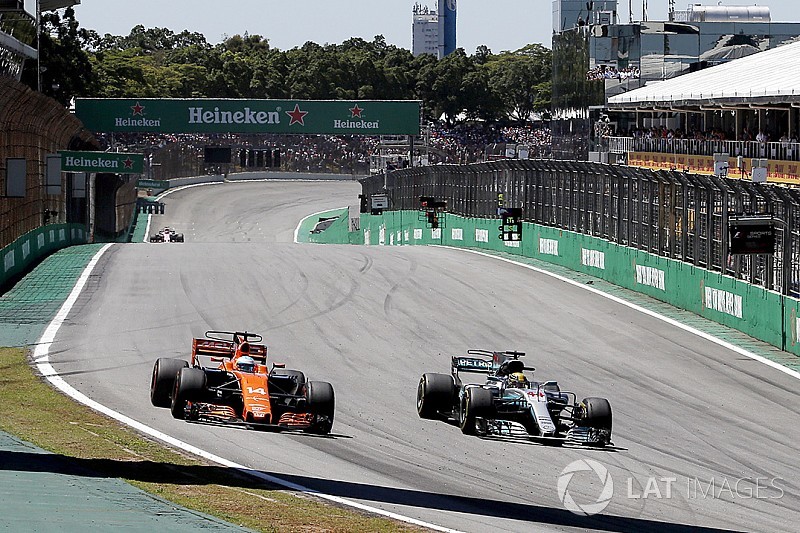 McLaren driver Alonso spent a big part of the race behind the Mercedes-powered Williams of Felipe Massa but, despite appearing faster on the corners, the Spaniard was unable to pass the Brazilian on the straights due to his lack of top speed.

Alonso reckons his rivals were around 50km/h quicker when running behind him with DRS enabled.

The two-time champion labeled Honda's lack of power "alarming" and warned Toro Rosso - which will run the Japanese power units next year - that it could face a difficult season.

"The lack of power today was amazing. In Mexico the same," said Alonso. "I was very, very close to Felipe a couple of times on the exit of the last corner, but even with the DRS he was pulling away.

"As I said, the lack of power is quite worrying for Toro Rosso next year."

He added: "It's still a shame that we have this incredible power deficit and that with all the battery, the DRS and everything they are still quicker on the straight.

"Yesterday I think it was 25 km/h. Today when someone uses the DRS it must be 40 or 50, so it's pretty incredible that we finish in front of some cars. The lack of speed today was alarming.

"Only Abu Dhabi left and another complicated year ends. Hopefully it's the last race we have to race in these conditions."

McLaren will switch to Renault engines for next year, but despite the constant reliability issues and the fact that the French manufacturer had to turn down its engines in Brazil, Alonso said he has no worries.

"We'll see. Renault is the best engine company in the last 15 or 20 years if you see all the championship so I think we should not be worried," he said.

The McLaren driver went on to finish the Interlagos race in eighth position and, despite the complaints about a lack of top speed, Alonso reckons his team enjoyed the best weekend of the year.

"Overall it was the best weekend for us. We started sixth, we were fifth, we finished in the points, so a happy weekend."

Hamilton: I was quickest "by a long way" in Brazilian GP