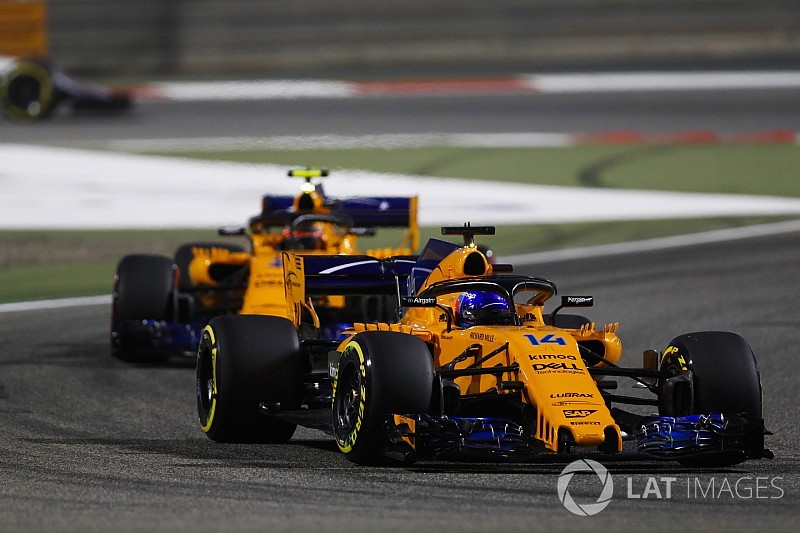 Fernando Alonso says his seventh place in the Bahrain Grand Prix was a "bit of a coincidence" and admits his McLaren F1 team must improve in the upcoming races.

The Woking-based team was left "astonished" on Saturday after struggling in qualifying, where Alonso finished 13th and teammate Stoffel Vandoorne was one place behind.

But both drivers recovered to finish in the points on Sunday, with Alonso in seventh and Vandoorne in eighth.

It is the first time McLaren has scored points in consecutive races with both cars since the 2014 season.

But despite the progress in the race, Alonso admitted the weekend had been particularly tough for McLaren and conceded the result flattered the car's performance.

"We fixed it [qualifying] on the opening lap, didn't we?" joked Alonso.

"When I looked in the mirrors and I saw [Lewis] Hamilton behind I thought 'I don't know what position I'm in but it can't be too bad if Hamilton is behind'.

"We were still lacking a bit of pace in the race to be with [Nico] Hulkenberg and to attack the Haas.

"A pretty difficult weekend saved by the bell at the last moment with two cars in the points and with good points for the team, but we know we have to improve because today was a bit of a coincidence."

Today's result, aided by the retirement of Ferrari's Kimi Raikkonen and the two Red Bulls, helped Alonso move into fourth place in the standings.

The two-time champion said he was "very happy" with the points haul so far despite McLaren's lack of pace.

"The race is not just about car performance. It's about saving fuel, the tyres, the start, the first corner, the first lap... there's a lot more factors and we are usually better on Sundays than on Saturday.

"We know it's been a particularly strange weekend for us. Very hard, too slow, especially in qualifying and we need to improve in the upcoming races because starting from so far back it's complicated.

"But anyway, fifth in Australia, seventh here, 10 points there, six here. We would have taken 16 points before starting the championship in Barcelona, so I'm very happy about that."