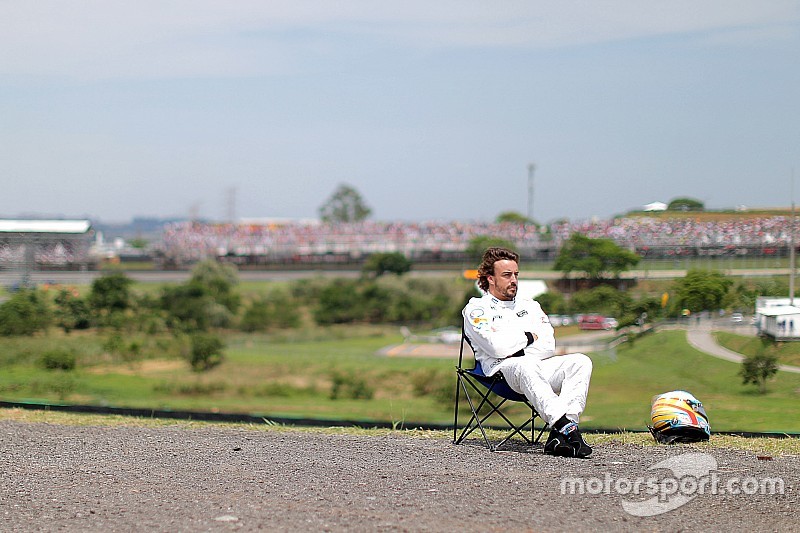 Fernando Alonso's may have expressed some frustrations at Honda's ongoing problems at the Brazilian Grand Prix, but his behaviour during qualifying did prompt a social media phenomena.

After his McLaren ground to a halt in Q1, Alonso took to a deck chair to watch the remaining part of the session, and catch a bit of sun.

And the iconic images was quickly captured by fans, who doctored the images to begin a trending theme of #placesalonsowouldratherbe.

Alonso himself was well aware of what was happening on Twitter and Facebook, and he joked with teammate Jenson Button before the team's Saturday press conference.

But behind the smiles, he did make clear that he was not too happy about what was happening.

"I think we know the situation, it is going to be tough tomorrow and maybe Abu Dhabi as well," he said. "But there are some incentives every race to test new parts for next year and to keep learning from our problems and our mistakes of this year, and try not to repeat any more.

"But it is frustrating. Not even participating in Mexico in the race and not participating today in qualifying – and tomorrow we don't know.

"Hopefully we complete 72 laps, but it looks quite a big thing right now after managing 10 laps all weekend. So it is the way it is.

"Hopefully we are learning, taking notes of all our problems and go deep into the investigation and not to repeat any more. As far as we are learning about all these things it is okay, but definitely it is frustrating."

Here though are some of the best Alonso images that appeared on social media on Saturday.

Alonso set to get new engine for Sunday

McLaren out of Q2 in a sad day for Alonso