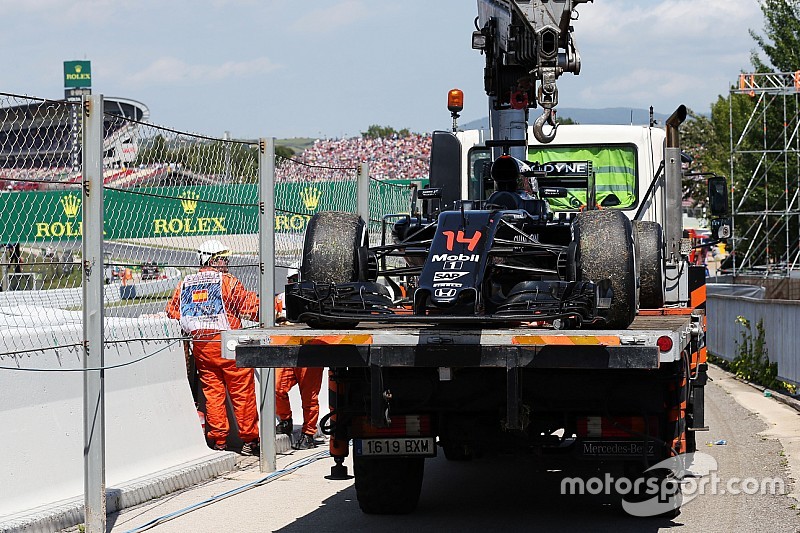 Fernando Alonso's Honda engine stopped at the Spanish Grand Prix as the result of being put into fuel cut-off mode, investigations have confirmed.

The Spaniard had hoped to be challenging for more points at the Circuit de Catalunya after qualifying 10th, but never fully recovered from a poor start that dropped him behind teammate Jenson Button.

His race eventually came to an end on lap 47, as he was running 12th, when his engine lost power on the run through Turn 3.

Honda was unsure in the immediate aftermath of the race about what happened, but analysis since the weekend has pointed to the Honda power unit being put into fuel cut-off mode, which stopped the car.

However, there is still no answer as to what triggered the engine to switch to this setting, because there has been no evidence of a sensor nor mechanical failure with the power unit.

Furthermore there were no pre-warnings of any kind.

One suggestion that has emerged is that Alonso may have put the engine into a wrong setting himself as he worked on solving other sensor issues that had come up in the race, but this has not yet been confirmed.

Furthermore, it is unclear about whether or not setting changes he made to shut things down happened as he slowed down or after the car had stopped, with on-board footage showing him playing around with controls.

The discovery of the fuel mode cause at least means that there should be no mechanical reason as to why the power unit cannot be used at the Monaco Grand Prix, but a full examination will take place before the event as a precaution.