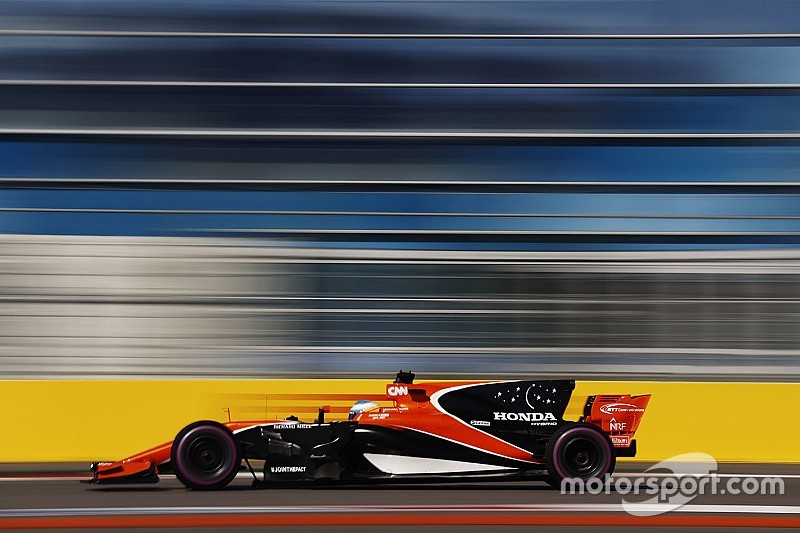 Fernando Alonso believes McLaren is losing around three seconds per lap on the straights of Sochi due to the power deficit of his Honda engine.

The Spanish driver finished qualifying for the Russian Grand Prix in 15th position with a time that was nearly 3.5 seconds slower than Sebastian Vettel's pole position.

Alonso was heard saying "unbelievable" on the radio at the end of the second qualifying segment, where he finished last.

Asked about his comments after the session, he said: "It's unbelievable how much we lose on the straights. I think it was 1.3s in the first sector and there's just one corner and we have no problems there, so that's what we have.

"On the straights we lose 2.5-three seconds on this circuit and therefore it's a bit... we knew it already before getting here, but then qualifying arrives and you always want a bit more."

Alonso was still delighted with his own performance in the session after outqualifying teammate Stoffel Vandoorne by seven tenths, the Belgian being knocked out in Q1.

"I think it was a basically perfect qualifying," Alonso added. "The Q1 lap would be hard to repeat. In Q2 I made a few mistakes, but Q1 was very good so I'm staying with that.

"Seven tenths to my teammate, with the same car, someone who has won in all categories before reaching Formula 1, so I still feel at the peak of my form and in my best moment."

When asked what he expected from the race on Sunday, Alonso said: "More or less what we saw in Bahrain, what we saw in China, in Australia, what we'll see in Spain, in Monaco, Canada...

"Every Thursday, Friday, Saturday and Sunday I stand here before you and I try to answer in the most polite manner but it's going to be a bit monotonous, a bit of the same story like it's always been in Formula 1.

"We can already say that Ferrari and Mercedes will fight for victory this year, that Red Bull will try to be on the podium, that Williams will be in the points, and the rest we'll try to grab a point when the rest allow it.

"So we'll try to have a perfect race but aware of our limitations."

Hamilton expects “a real race” with Ferrari at Sochi