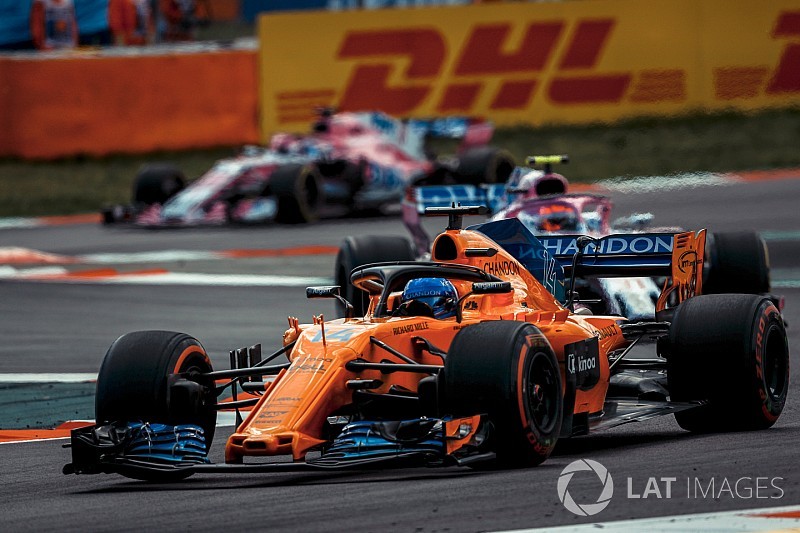 Fernando Alonso believes the McLaren Formula 1 team is now a match for Haas and Renault, despite finishing behind both in the Spanish Grand Prix.

McLaren introduced a substantial upgrade package for Barcelona and reached Q3 for the first time in 2018 with Alonso, who started between Kevin Magnussen's Haas and Carlos Sainz's Renault in eighth.

But Alonso finished 40 seconds adrift of Magnussen's sixth-placed Haas as he took the same position in the race.

Despite this, the double F1 world champion believes McLaren has now caught the teams that have been setting the 'best of the rest' pace behind Mercedes, Ferrari and Red Bull this year so far.

"We knew that the upgrades would put ourselves in a better position in the midfield pack," said Alonso.

"We did a good step. We were eight tenths behind Renault in Baku, nine tenths behind in China, but [in Spain] we were the same in qualifying and in the race.

"I think we caught up with Renault and probably with Haas as well, but the top three teams are still developing the cars at the same rate we do and unfortunately we've kept that gap."

Alonso was the only Q3 driver who had to use supersofts to get through Q2 at Barcelona, though his time in the pole shootout was within 0.045s of Magnussen's Haas ahead.

A brush with Sainz and then the need to avoid the massive crash triggered by Romain Grosjean's spinning Haas meant Alonso fell to 11th on the opening lap, and his race was then compromised by a long spell behind Charles Leclerc's Sauber.

"I was behind Leclerc half of the race and it was definitely difficult," said Alonso. "We are still lacking some straightline speed to be able to overtake.

"It's something that we are working on. We know our weakness on the car and hopefully we'll find solutions quite soon."

He declared himself "really happy" with his eventual eighth place given the early delay.

"Obviously we had a plan: starting with the supersoft tyre we knew that we had to overtake people in the first couple of laps and then stop early," Alonso added.

"Unfortunately we found that we lost positions in the first couple of corners because of the incidents, so at one point I thought that points were impossible.

"But we did a good race, a good strategy with only one stop and it's five consecutive races in the points."

Alonso is now seventh in the drivers' championship, having been leapfrogged by podium finisher Max Verstappen at Barcelona.

McLaren dropped out of the constructors' championship top four for the first time this year in Spain, as Sainz finishing one place ahead of Alonso in seventh moved Renault in front by one point.

Why Grosjean is F1's unsolvable problem