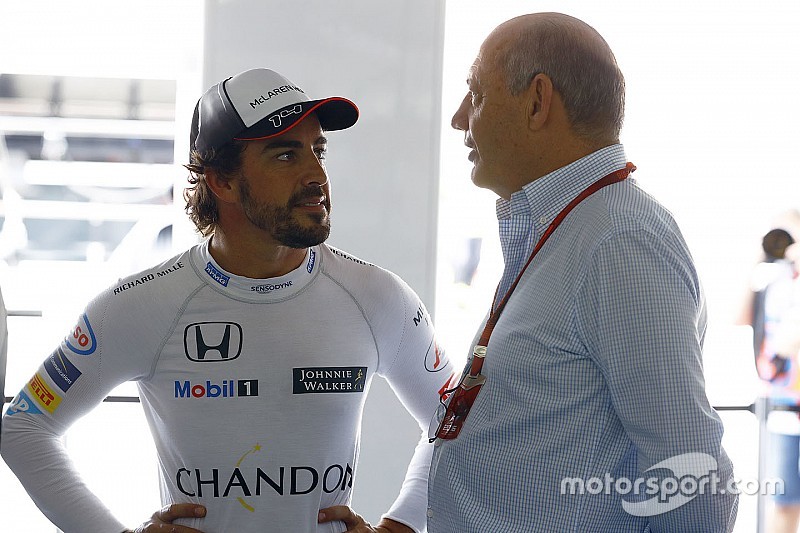 Fernando Alonso reckons a deal for him to skip the Monaco Grand Prix and race at the Indianapolis 500 would not have been possible if Ron Dennis had still been in charge at McLaren.

The Spaniard announced his shock decision ahead of the Bahrain Grand Prix with McLaren having put together a package that will allow its driver to compete in the blue-riband IndyCar event.

With McLaren’s new executive director Zak Brown more open to a different path for this team’s future, Alonso said that he doubted former chairman Dennis would have let him do it.

“I guess not,” Alonso said when asked if Dennis would have approved the plan. “Zak is a man that has a bigger vision than other team principals or bosses that I had.

"He sees motorsport differently, he sees McLaren bigger and no longer concentrated [exclusively] on F1. He is a true racer, so it is great that McLaren had Zak come on board last year.”

Asked also if he would have chosen to race at Indy if he had a more competitive car, Alonso said: “If the car was competitive this year, and we had 43 points together with the other guys [Lewis Hamilton and Sebastian Vettel], you cannot afford to lose a 25 points possibility missing one race.

"Things would be different if we were competitive.”

Alonso has been open about his desire to win the Triple Crown of the Monaco GP, the Le Mans 24 Hours and the Indy 500, saying this was a major motivation in wanting to compete in the American race.

And he revealed that there was a chance he could have competed at Le Mans this year, with McLaren's racing director Eric Boullier in favour of such a plan.

“I think the McLaren-Honda partnership, to be able run this in Indy 500, was very attractive this year, so for Le Mans it is something I will do, probably as soon as I can. I don’t know if it will be next year or following years.

"The first priority is F1. If I can race together with F1 and other series as I am doing this year it will be okay, if not I will only do F1.”