Alonso: Honda has no power and no reliability 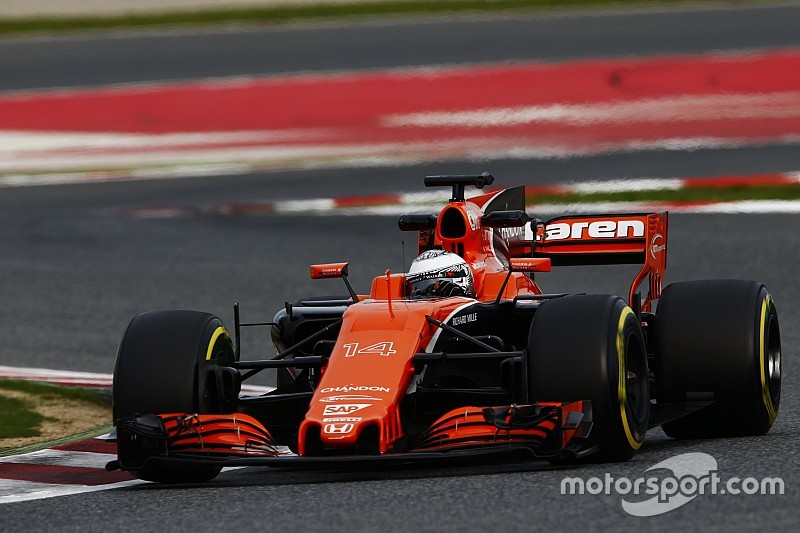 Fernando Alonso has pinned the blame for McLaren's 2017 trouble on Honda – saying its new Formula 1 engine has no power and no reliability.

Amid ongoing problems for the Woking-based team, the Spaniard did not hold back on Wednesday in pointing out who shouldered the responsibility for McLaren's difficult situation.

"I don't think we are too far back in terms of chassis side," he said, when asked to assess McLaren's position. "We have only one problem: that is the power unit.

"There is no reliability and there is no power. We are 30km/h down on the straight, every straight.

"So when you are 30km/h down on every straight it is difficult to have a feeling on the car. Everything feels good, but when you arrive to normal speed you don't know what is going to happen."

Alonso believes Honda's situation was not as bad as its troublesome first year back in 2015, but he also said it was not good enough after the optimism of the winter.

"I think it is similar to last year to be honest," he said. "In 2015, probably we were even [further] behind than now.

"Probably this year is a bit more frustrating because the change of regulations and things like that, you have higher hopes when you think you can close that gap over the winter.

"Definitely we need to improve and we must improve. The situation is far from ideal. We are a big team. McLaren has been dominating the sport for many years and fighting for the championship for many years.

"When you think about McLaren, when you see a McLaren, you are afraid of them when you are an opponent because you know McLaren will sort things quickly as a big team. So this is what we need.

"We need a reaction from everyone. We need to stay united, working close to each other. But definitely a big reaction that I expect from the team immediately."

Alonso said that his biggest concern was what progress could be made in finding power from the engine, rather than reliability.

He also said the oil tank design issue that Honda suffered on the opening day of testing was not something that should have happened.

"The oil tank was quite an amateur problem we had that day," he said. "From day one we keep unlocking a little bit the situation in terms of power and in terms of reliability.

"When you do more laps you discover other things. Temperature in the rear caliper or whatever, bodywork that is not properly tight.

"Things you normally discover on day or day two in winter testing. We do 40 laps every day, so we are like in day two of testing for everyone else.

"We are discovering those little things. There is nothing to worry for Australia I guess. We'll be fully ready to compete in a good level, the only question mark is how much power we will have."

When asked whether he was able to take Barcelona's Turn 3 flat out, Alonso also made a joke about the lack of performance.