Fernando Alonso believes newly-crowned Formula 1 world champion Lewis Hamilton had it “too easy” on his way to the title in 2017.

Hamilton had been embroiled in a close fight at the top of the standings with Ferrari's Sebastian Vettel for much of the year - but as Vettel's championship challenge unravelled in the end, the Briton romped to his fourth world title, sealing it at the Mexican Grand Prix with two races to spare.

Alonso feels that Hamilton did not have a particularly hard time en route to becoming champion this year, suggesting that the absence of former teammate Nico Rosberg – who retired after beating Hamilton to the crown in 2016 – left him with a clear run a the championship.

"It was very easy this year, no opponents," Alonso said. "Last year he had Nico until the last race, fighting every single race."

The Spaniard – who reckoned after qualifying that McLaren had the best chassis of the F1 grid in Mexico – said he hopes the Woking-based team's impeding switch from Honda to the more-powerful Renault engines will give Hamilton a challenge in 2018.

"This year was too easy," the Spaniard reiterated. "Mercedes four races to the end constructors' champion, Hamilton three races before the end drivers' champion.

"Hopefully McLaren-Renault will change this easy time for them."

Having started the Mexico race from 18th due to engine penalties, Alonso fought his way through the pack to finish 10th, scoring a solitary point to bring his 2017 tally to 11.

"I think it was good - overall we start last, we finish in the points, which is a good target for us," he said. "I think we had the speed all weekend, the car kept feeling very nice, very good handling, and good balance throughout the race.

"I think we lack a little bit of straightline speed to attack or defend, so we [were] stuck behind the Sauber [of Marcus Ericsson] for half the race and then we could not pass [Kevin] Magnussen. And we are very vulnerable when we are in front of people."

With Hamilton forced to fight his way through the pack after an early-race puncture, Alonso got to battle the Mercedes man for ninth place in the closing stages of the race.

He managed to keep the Briton behind for several laps, but eventually had to yield.

"At the end with Hamilton, as soon as you start battling, you lack a bit of straightline speed," Alonso said. "We tried to brake a little bit later every time, tried to defend the position but it was not possible."

Asked whether the late-race battle was a way of reminding Hamilton about himself, Alonso said: "I think he knows, he knows. He knows also how strong the McLaren car [is] in the corners, he saw also today.

"I think next year hopefully we can give a little bit harder time to him." 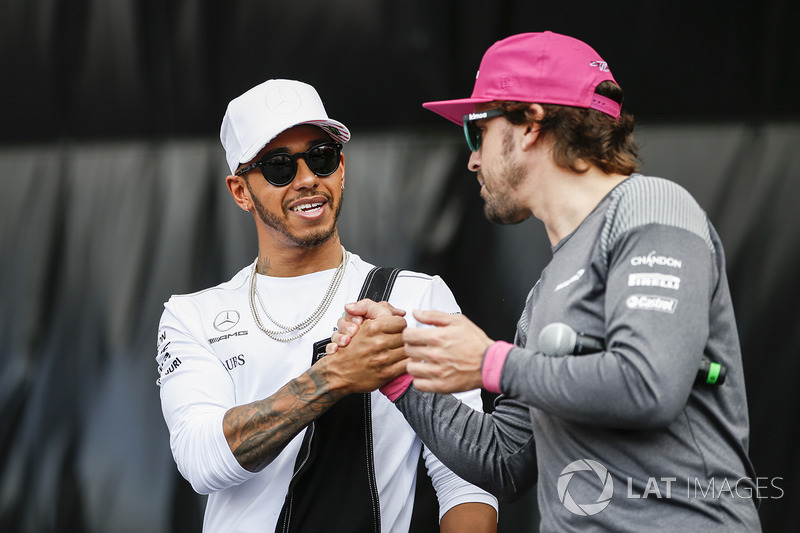