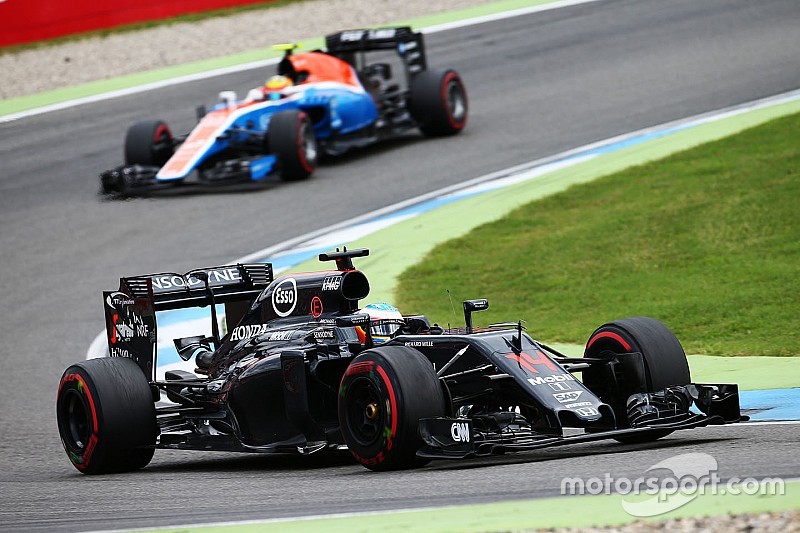 Fernando Alonso admitted he is frustrated by the selective radio messages broadcast on television during this weekend's German Grand Prix.

After he complained about a Ferrari in front of him during qualifying, Alonso's radio was back in the spotlight during the race on Sunday following a slow first pitstop.

"Yeah, don't worry, I will lose another position in the next stop and I will recover it on later on," Alonso sarcastically replied to his engineer after being told he was doing a good job on track.

The Spaniard had already suggested on Saturday that only his negative radio messages were broadcast on TV.

"I don't complain as much as people think, and I hardly talk [on the radio]," he said.

After the race, Alonso again downplayed his radio outburst, insisting that only the negatives are broadcast.

"We lost a few seconds there, but that's fine," said Alonso of his slow pitstop.

"They just seem to have a certain tendency to broadcast my radio messages live.

"At the end of the race I congratulated the team for the job done and I don't think they broadcast that. And if we lost six seconds at the start, it's fine to say it.

The McLaren driver finished the race outside of the points in 12th position after a tough race during which he struggled with fuel consumption.

"We had to save a lot of fuel in the final part after all the battles we had in the first half of the race," Alonso said.

Teammate Jenson Button came home in eighth position, but the Briton admitted he had also been saving fuel for most of the race.

"[I was] consistently looking at the steering wheel, looking at how much fuel I had to save - and I had Fernando behind me," said Button.

"He was six-seven seconds behind me at one point and suddenly he's right behind me. I was like 'he can't be saving fuel' and then suddenly he disappeared from behind 'cause he realised he had to save fuel, I think."

Vettel: Ferrari "knows what to do" to turn season around