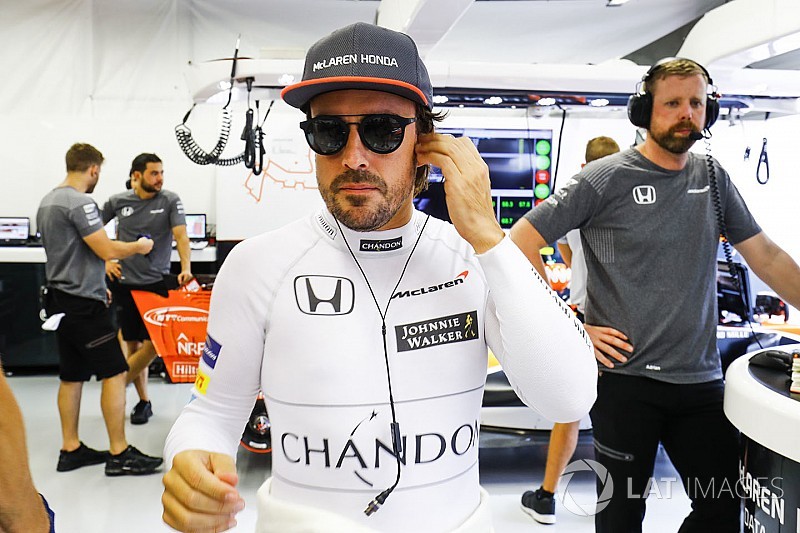 Fernando Alonso says he left a fist-sized hole in the wall of his private drivers’ room in Singapore, after anger got the better of him following his first-corner exit.

The Spaniard had looked set to challenge for a surprise podium at the Marina Bay circuit after making a brilliant start and jumping up to third around the outside of Turn 1.

However, he got taken out in the collision between Kimi Raikkonen and Max Verstappen – and was pitched off the track. Although able to get going again, his car was damaged and he was eventually forced to retire.

Speaking in Malaysia on Thursday, Alonso says that his disappointment turned to anger when he watched a replay and realised how big an opportunity he had lost – which is when he punched the wall in anger.

When asked by Motorsport.com about leaving a hole, Alonso said: “Yes... it is still there! It was frustration.

“When I saw the replay, and when I saw [Sebastian] Vettel spinning out of Turn 3, we were just behind Lewis [Hamilton], and we were on the right tyre at that moment.

“So we could even try to overtake him if the moment arrives. Then probably, we lose one or two positions, but not more because it is a street circuit, no one will overtake you.

“And that podium could have been one of the biggest things of my career and we missed it.”

While Alonso has dealt with his fair share of frustrations during his return to McLaren, he says Singapore hurt particularly badly because it could have been such a good result.

“Definitely it was another frustrating time,” he said. “Sometimes we are slow and we are uncompetitive and cannot do anything, like Spa and Monza.

“Then we wait for this couple of circuits where we know we are competitive, plus we had the rain, plus we were second or third in that moment in the corner. I think a podium was guaranteed in Singapore and a podium was probably the biggest achievement of the last decade for me.

“So, we missed that. But I tend to think positive always, and if that had to happen this year it is because destiny wanted that, and it is taking care of our luck for better opportunities.”

Pushed further on whether he believed in destiny, Alonso said: “I believe things happen because they have to happen.

"I really think that all the things that happen in a race or happen in a championship or in your life, there is maybe a reason behind. And that reason is because better times are coming, and I prefer to think that way.”

Bottas says driving style has hurt him in recent races