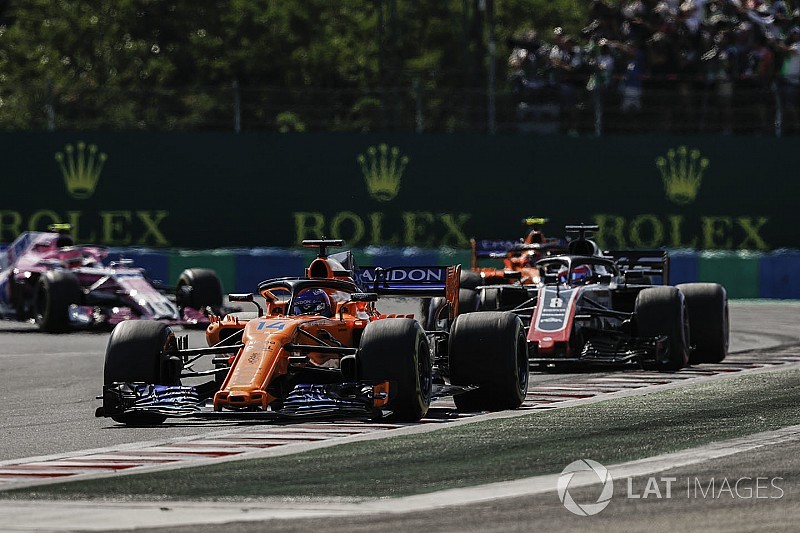 Fernando Alonso has conceded Romain Grosjean's opportunistic overtake at the first virtual safety car restart in the Hungarian Grand Prix was fair, having initially suggested it might be illegal.

Alonso initially indicated over McLaren team radio that Grosjean's Haas illegally overtook when Grosjean snuck past Alonso at the VSC restart on lap seven of 70.

"Grosjean passed me under the safety car. I was right on the delta [minimum time limit] so I don't know," Alonso reported.

The stewards ultimately did not investigate Grosjean's move and after the race Alonso admitted Grosjean simply "did a better job" of managing the restart.

"He really stole my wallet," Alonso told TV crews. "He did a better job.

"We have a few seconds of warning that the safety car is going to end so I tried to get close to the delta that you get, and when it went green I went full throttle and Grosjean was already by my side.

"He must have had a perfect acceleration and a perfect timing, so I lost the position there."

"We didn't do anything wrong, we didn't get a break - that is quite a black and white decision," Steiner said.

"It's not an opinion, it is a timing issue - did he [Grosjean] go past or not [unfairly]? No, end of story. He did a good job. It was done clearly and it was clean.

"He [Alonso] tries it all the time and I think the stewards get enough of it as well."

Alonso expressed annoyance after qualifying at F1 regularly broadcasting his radio disagreements with his own team, but was full of praise for the way McLaren managed this race, utilising a long opening stint to leapfrog midfield rivals, including Grosjean, into the points.

Alonso finished eighth after starting 11th, while teammate Stoffel Vandoorne was running close behind before retiring on lap 49 with a gearbox problem.

"The strategy worked perfect," Alonso said. "I think the pitwall really did an amazing job.

"Unfortunately Stoffel had to stop the car with a gearbox problem but we are extremely happy with the points.

"A good race at the end, good battles at the front - I was watching behind the Mercedes and the Ferraris [at the end]. I think everyone enjoyed."

How Mercedes stole a win in Ferrari territory