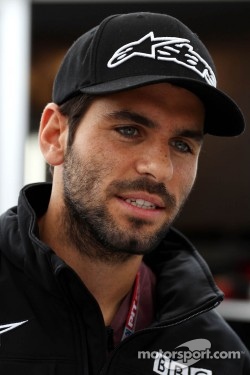 That is the claim of the Spanish publication Mundo Deportivo, referring to the 22-year-old Spanish driver who was ousted at the last minute for the 2012 season by Toro Rosso owner Red Bull.

"Everybody was caught out with not enough time to think of everything, so I was left without a seat," he said in March.

For 2012, he is still in the paddock full-time with a co-commentary role on British radio BBC, while he will keep his senses sharp by serving as F1 tyre supplier Pirelli's main test driver.

"It (the Red Bull decision) hurt me but it didn't kill me," he is quoted as saying.

But Mundo Deportivo claims that it was "very difficult" for Alguersuari to witness Lotus drivers Kimi Raikkonen and Romain Grosjean finish on the podium in Bahrain last weekend.

"He no doubt remembers last November 26, the day of qualifying in Brazil, when the Lotus Renault team was interested to know if he was free to go to them in 2012," read the report.

Alguersuari, who writes a column for Mundo Deportivo, reportedly told the Lotus bosses that he would be at Toro Rosso in 2012, because Franz Tost and Dr Helmut Marko had told him so.

Interestingly, Alguersuari will drive a Lotus Renault this year, because it is the Enstone based team's 2010 car that has been acquired by Pirelli for private tyre testing.

His track programme kicks off at Jerez next month.