Alexander Albon was left surprised by the lack of grip that caused his heavy crash during practice for the Formula 1 Bahrain Grand Prix on Friday night. 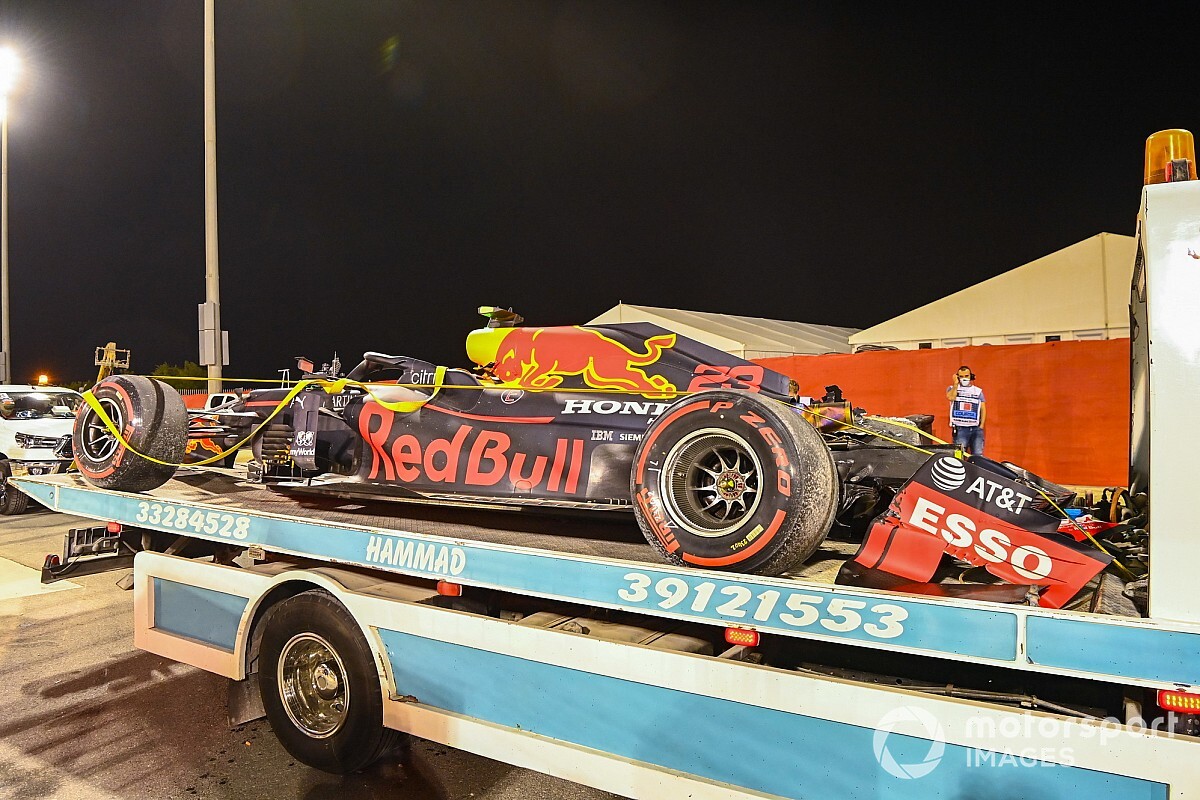 Red Bull driver Albon crashed out at the final corner of the Bahrain International Circuit midway through second practice, causing the session to be red flagged.

Albon's car was left with a significant amount of damage, taking off three wheels and breaking both the front and rear wings.

The Anglo-Thai driver crashed after running wide at the final corner, causing his car to spear into the wall as he struggled to catch the snap to the right.

Albon reported that he was feeling OK as he has "had a few of them", but explained that the lack of grip running wide had caught him out.

"It was just one of those things that I should have got pulled out of it really," Albon said.

"I was a bit surprised by the lack of grip. It was one of those things. Quite a difficult, awkward angle, those crashes, so not fun, but all good.

"I did back out, but not enough basically. When you have like one tyre on the astro and one tyre on the grip, that's when the tank slappers happen. It's one of those things."

Red Bull team principal Christian Horner called the crash "frustrating", but took some comfort in the fact the engine seemed unharmed and that Albon was using a practice gearbox.

"The monocoque looks OK, the engine looks OK, it's not a race gearbox, but it's going to keep the guys busy tonight," Horner said.

"It's difficult to quantify in money, but it's a significant amount, because the car has been pulled in to the barrier.

"It's done I think at least three corners, if not all four corners, and the rear wing, front wing, nose box. It's a significant amount."

Albon is currently fighting to keep his Red Bull F1 seat after a difficult season that has seen him struggle to match teammate Max Verstappen's form, scoring just one podium finish.

Red Bull has openly stated it would look to an experienced driver, such as Sergio Perez, for next year were it to replace Albon, but is happy to give the youngster time to stake his claim to the seat.

Horner said that Albon had to try and put the crash out of his mind heading into the rest of the weekend, and highlighted his impressive recent showings.

"In Istanbul and so far this weekend, in terms of characteristics and his feeling from the car, it's been getting better and better," Horner said.

"His feedback has been very consistent with that of Max's. It's a great shame that he's had that accident. He didn't get a first lap on the medium tyres, so he's gone on the back foot, and that accident doesn't help.

"But hopefully tomorrow is another day."