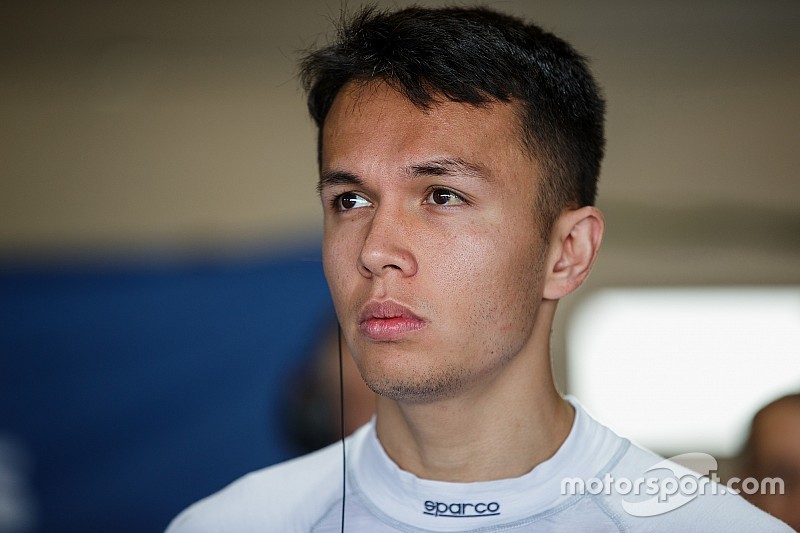 Alexander Albon is expected to be announced as a 2019 Toro Rosso Formula 1 driver in the coming days, having completed extracting himself from his Nissan Formula E deal.

Albon was a Formula 2 title contender this season, although he slipped from second to third in the F2 points behind Lando Norris after Sunday's finale in Abu Dhabi.

He has been at the top of Toro Rosso's list of contenders for its second 2019 seat alongside Daniil Kvyat for several weeks but had already committed to joining Nissan e.dams for the 2018/19 FE season.

Sources say the British/Thai driver is now legally free of his Nissan commitments, and therefore able to take up the Toro Rosso opportunity.

Red Bull motorsport advisor Helmut Marko refused to confirm that Albon had won the drive, but conceded that the 22-year-old was a better prospect now than when he lost his place on Red Bull's junior programme at the end of 2012.

He would be the third driver in a row to get a Toro Rosso F1 seat having previously been dropped by the Red Bull system, following Brendon Hartley and Kvyat.

"Let's see, nothing is fixed," Marko told Motorsport.com when asked about Albon. "He's one of the candidates we've looked at.

"It's the same like Daniil. He's far more mature, he's had some very good races. That shows that he has potential."

Marko played down suggestions that Albon's Nissan contract had already been paid off, suggesting the matter was in the driver's hands rather than for Red Bull to resolve.

"We don't have a contract with Nissan, it's something he has to sort out," said Marko.

Toro Rosso team principal Franz Tost also insisted the final driver decision while making it clear that he had been impressed by Albon in 2018.

Albon kept the F2 title fight with 2019 Williams F1 signing George Russell alive until the season finale weekend, when his car stalled on the race one grid and Russell was able to seal the championship with a win.

"As far as I'm informed a contract has not been signed yet, and as soon as this is the case Red Bull will come up with an announcement," said Tost.

"Albon is one of the candidates, yes. He showed a very good performance during the year. He finished in the top three, but unfortunately Norris scored more points than him.

"He was unlucky because he stalled the engine because of the clutch problems, but he caught up in the race.

"Whether he will become our driver or not, we will see."

Albon will not be able to sample the Toro Rosso at this week's Pirelli test in Abu Dhabi, as the returning Kvyat will share driving duties with test driver Sean Gelael - who is contractually owed a day in the car.

Verstappen refuses to "look like an idiot" with public service