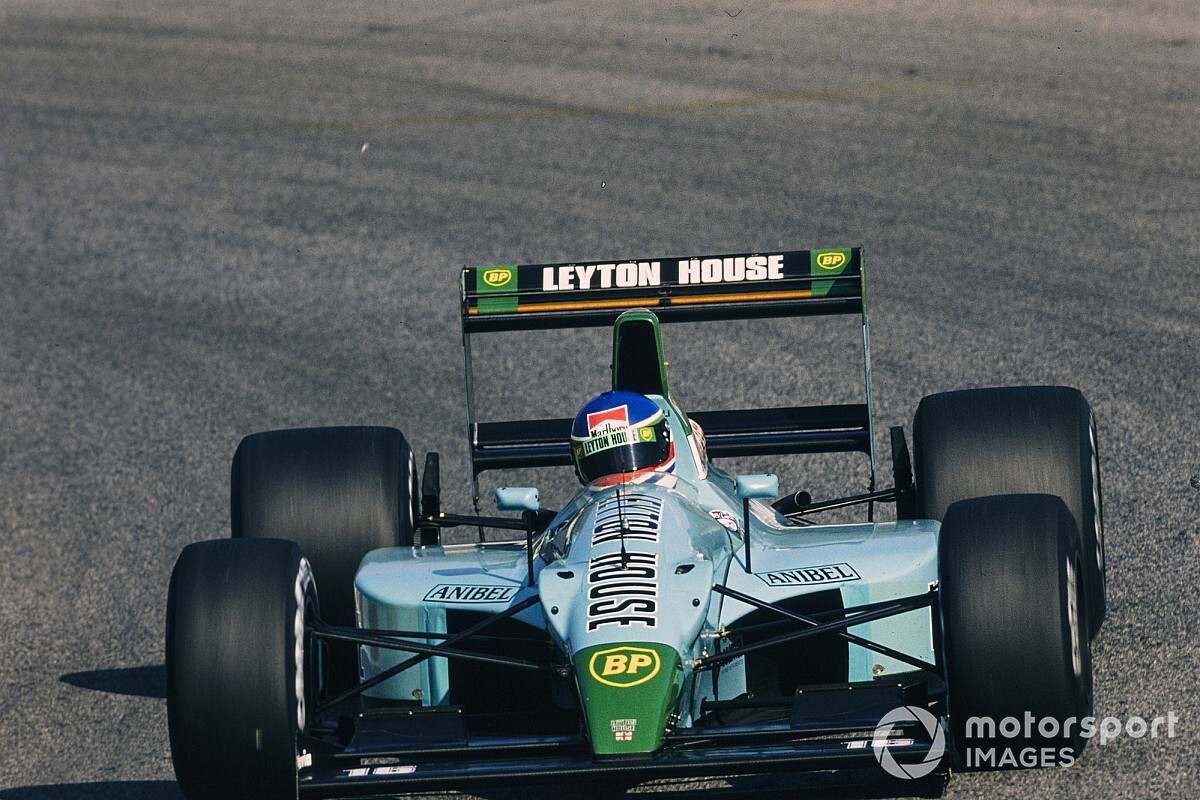 It never won a race, but the March team of the late 1980s and early 1990s was very significant for the future of F1. Motorsport.com's sister title Autosport magazine explained why in the 16/23 December 2010 issue.

When first-time technical director Adrian Newey strode through the door of the resurrected March Formula 1 team’s Bicester base in the summer of 1987, he met his destiny. What followed in the next three years was a revolution in turquoise that changed grand prix car design forever, triggering a causal chain that brought glory to Williams, McLaren and then Red Bull.

Newey describes what metamorphosed into Leyton House Racing as “the breeding ground” for the championships that followed over the next two decades, and the success of Red Bull in the 2010s as completing the “unfinished business” that started all those years ago.

On paper the team can claim a scant four podium finishes, but its impact on the sport is greater than the mark it made in the record books.

While the revived March team, under the direction of former Autosport editor Ian Phillips, plodded on with the 871 – little more than a cut-and-shut Formula 3000 design – during the second half of 1987, Newey turned his attention to designing the March-Judd 881. It was an epoch-making car – far more so than the McLaren-Honda MP4/4 that it raced against in 1988 – and the thin end of the wedge as far as aerodynamics being the key to F1 car performance.

“The turbocharged cars had far more power, so the philosophy was to concentrate on aerodynamics as the prime design principle, with the mechanical side fitted in around that,” says Newey of what remains one of his most beloved designs. “Then, the cars were usually drawn mechanically and the aerodynamicists had to fit something around that.

“It was aggressive, with features that had not been seen before in F1. It was the first raised-nose car, the first with properly sculpted front and rear-wing endplates, and the diffuser was quite advanced.

“It’s fair to say that it changed the design direction of F1. I hate to say it, but it set a trend. It was certainly more aerodynamically efficient than anything else around.”

It also set the template for Newey pushing the bounds of physical reality with his packaging, something that left March drivers Ivan Capelli and Mauricio Gugelmin struggling.

“It was small,” says Capelli. “The steering wheel was just 25 centimetres across and the whole bulkhead that you had to put your legs through was 25cm. With three pedals it was so tight that there was no footrest, which was a real problem in some corners.

“The first time I drove it, I couldn’t reach the gear lever because it was too far back. Adrian said, ‘Wait there’, took the gear lever out, and I could hear hammering at the back of the garage. He came back with the lever bent forward!” 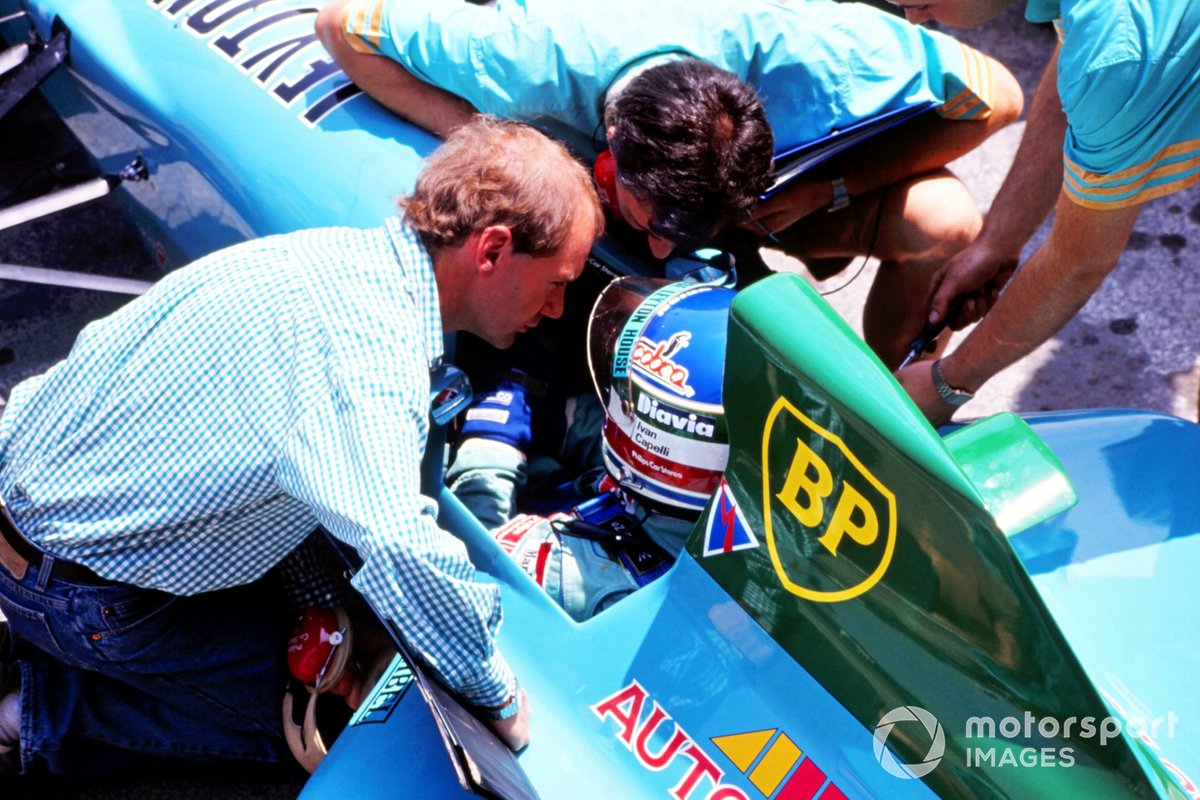 Capelli recalls Newey going for a seven-lap run in the 881 at Vallelunga in testing after the end of the season and accepting that the car was cramped – although Newey himself claims only to have driven a Leyton House-liveried F3000 car on the day in question. Ultimately, comfort was secondary and Capelli was happy to be behind the wheel of so rapid a car.

“If you say to a driver that he will be uncomfortable but half a second quicker, it’s an easy choice,” adds Capelli. “And I realised on the first lap in winter testing at Silverstone that the car was very good.

“At Copse, I was arriving flat-out, banging it down a gear and then through. Then, in Brazil, Carlos Reutemann came to our garage and wanted to know who was driving the cars because we were so much quicker through the first corner!”

It was at the British Grand Prix that the March 881 really started tongues wagging, not least among McLaren drivers Ayrton Senna and Alain Prost, who were blown away by the car’s speed through Copse. The Marches locked out the third row and Gugelmin finished fourth – Capelli feels that winning might not have been out of the question such was the car’s pace.

From then on the team scored consistently. Capelli was a close second to Prost at Estoril and briefly took the lead from the Frenchman at Suzuka. This earned March sixth in the constructors’ championship, a remarkable return for such a young team.

“Adrian arrived with a car in his head that blew everyone away because it was near enough half the size of anything else,” says Phillips. “The March 881 was years ahead of its time and I regret that the team wasn’t good enough to deliver Adrian a win. Every time I see a Newey car winning, it hurts me more.”

Newey agrees that, in the right circumstances, the March would have won, but he does not hold that against the team.

“If Williams had been running the 881 with Nigel Mansell driving it, it would have won races,” he says. “But that’s not where we were at the time as a team.

“We came close a couple of times – in Portugal we were quick enough to win but by the time Ivan had got past Senna, Prost was too far up the road. Then there was Japan in the wet, where Ivan briefly got into the lead and then the ECU failed [while running second – although Phillips suspects that Capelli might have accidentally thrown the engine kill switch].” 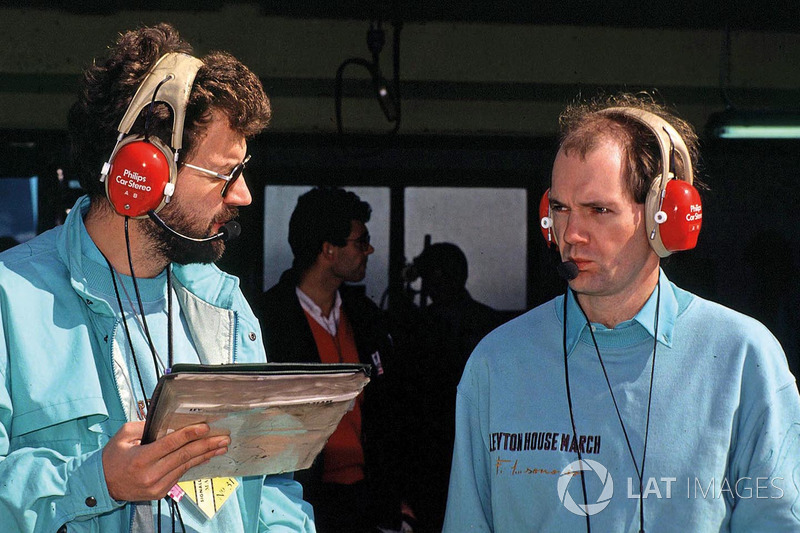 This was a team on the up, but the March CG891 was not a worthy successor to the 1988 car, which had its last hurrah in the 1989 season opener in Rio, where Gugelmin finished third. It could have been even better than that.

“Mauricio was in third place and had one look at passing Prost,” recalls Phillips. “Alain closed the door and he didn’t try again, sitting behind him for 20 laps in a car that was several seconds a lap faster. That was a certain second place and he might even have been able to win – he just wasn’t good enough.”

The CG891 struggled badly and failed to score a point in 1989. A natural progression from its predecessor, and built around a more-compact version of the Judd powerplant, it performed well in the windtunnel but was uncompetitive on track.

“The 891 was troublesome to start with and that was mainly aerodynamically,” says Newey. “We had some gearbox problems at first, but once we sorted those [through the work of Gustav Brunner], the car wasn’t as stable as the 881 had been.

“It wasn’t until the first part of 1990 that we looked at the windtunnel itself and realised that the floor had bowed over a period of time and was giving completely false readings, sending us in the wrong direction.”

The problem with the Southampton windtunnel made 1989 and the first part of 1990 a write-off. The 1990 car was called a Leyton House CG901 in deference to Akira Akagi, boss of the Japanese backer, taking full control of the team and separating it from March Engineering, but the season started just as badly.

In Mexico both drivers failed to qualify at the bumpy Autodromo Hermanos Rodriguez, but the introduction of a new floor/diffuser package transformed it into the car that almost won the French Grand Prix at Paul Ricard. Only a fuel-pressure warning on the penultimate lap forced Capelli to back off, letting Prost’s Ferrari past, but the Italian came home second in the team’s finest hour.

Sadly, what might have been the turning point, when the team regained the momentum it had in 1988, was instead a last hurrah.

“The 1990 car was basically the 1989 car, because there was no point in building a new one if we didn’t understand what was wrong with it,” says Newey. “Then, by the time we understood what was wrong, several other things were happening.

“Akagi, it transpired, was getting himself into debt and had to keep running the team to show the banks that he was fine. He was doing it on a shoestring.

“Ian went down with meningitis, so he wasn’t in the factory for what must have been six months, and an accountant, Simon Keeble, was appointed by Akagi to be his eyes and ears, run the company and basically keep the budget down. If there is one person who should never, ever be allowed to run an F1 team, it’s an accountant!” 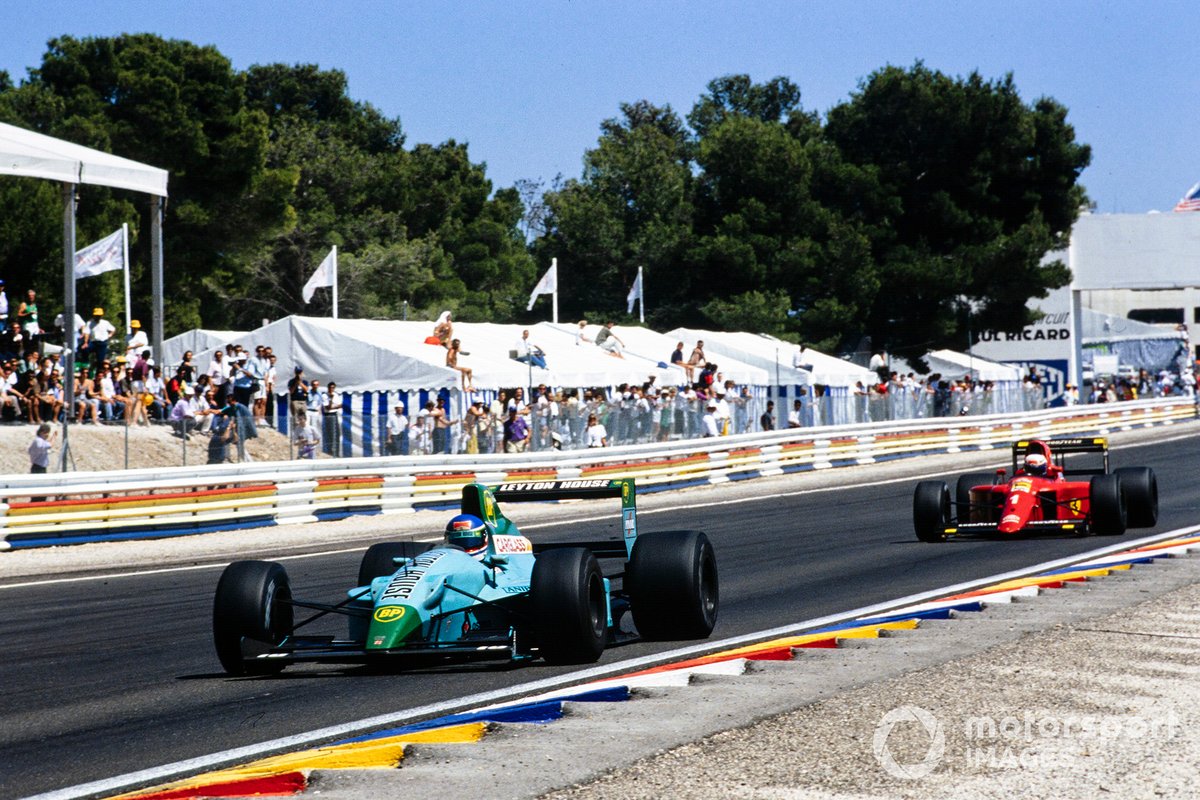 Newey had also made himself a marked man in Akagi’s eyes by scuppering a Porsche engine deal.

“He wanted us to take the Porsche engine so that he had the kudos of the name,” says Newey. “I looked at the engine, which was basically two old TAG turbo engines nailed together, and realised there was no way it was going to be competitive – it was the engine that ended up in the Arrows.

“But the Judd engine wasn’t going that well, so I commissioned my old friend Mario Illien to build an Ilmor engine. It was the right decision technically, but it upset Akagi a lot because of the political side of it, which he hadn’t explained to us. That made me rather unpopular with him.”

After consulting with Phillips, who was recovering from his illness but still not on active duty, Newey decided to leave and turned down the better-paid job of becoming Arrows technical director in favour of becoming chief designer at Williams.

In fact, Newey hadn’t even been at Paul Ricard to enjoy Capelli’s near-win as he had left the team days before, but that race stands as a fitting epilogue to his Leyton House adventure.

“What was good about Leyton House was that had I gone straight in with an established team, big or small, I would have been trying to establish myself within an existing design group,” Newey points out. “It was great to be able to do things in an inexperienced group with no preconceptions. We relied on our instincts, judgement and the results of the windtunnel.

“It was very sad to see the team decline. If the money had stayed in and Ian had been there to run it we could really have got somewhere. My decision to join Red Bull was partly motivated by that sense of unfinished business from Leyton House.

There were no wins for Leyton House, the little team that could have been one of the major players of the 1990s. But the fact that there were only flashes of brilliance and a few glimpses of the future perhaps makes the story that bit more compelling. 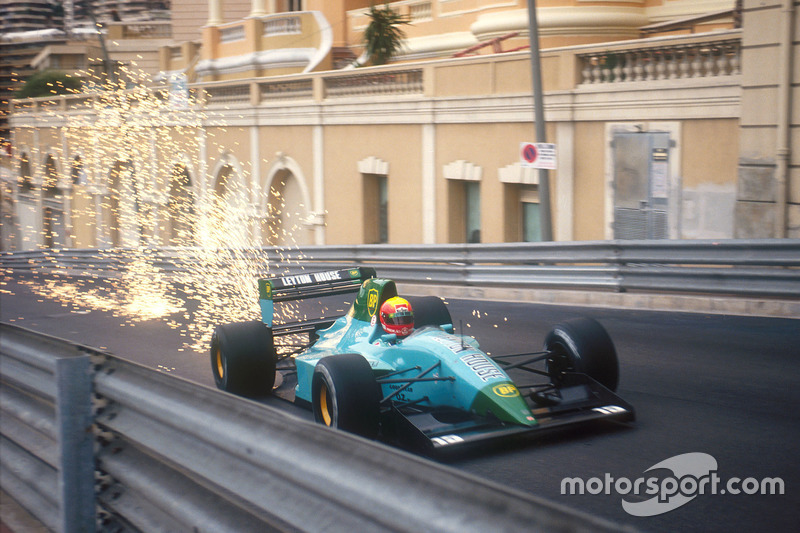 Ricciardo: I could have lost McLaren seat without early deal

Giovinazzi "really happy" to have been on Ferrari shortlist