Join us as we delve into the latest technical developments from the Abu Dhabi Grand Prix at the Yas Marina Circuit, courtesy of Giorgio Piola and Sutton Images.

Click on the arrows in the images to scroll through them 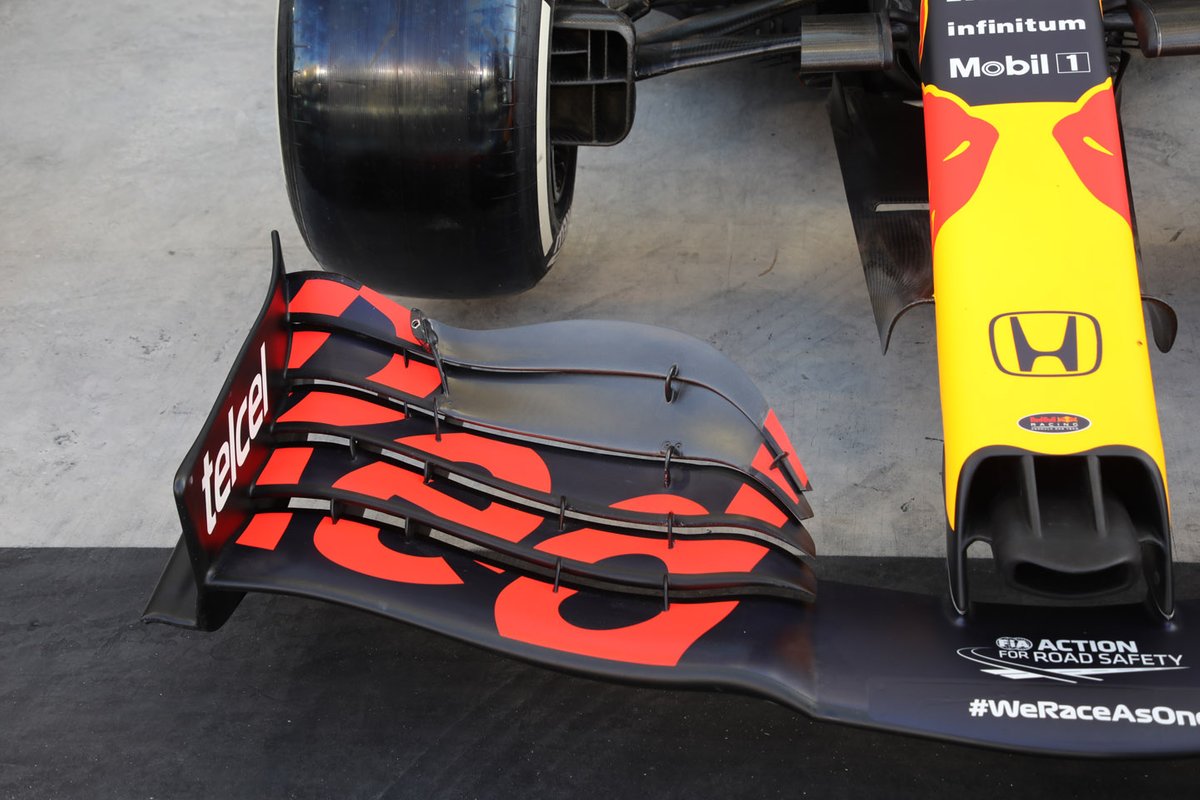 1/18
See the different colour of the upper two flaps on the inboard side of the adjuster of the front wing presented here by Red Bull. Owing to a shortage of parts and the crash damage sustained in Saudi Arabia, Red Bull has been forced to make repairs to the front wing, seen here on Sergio Perez’s RB16B. 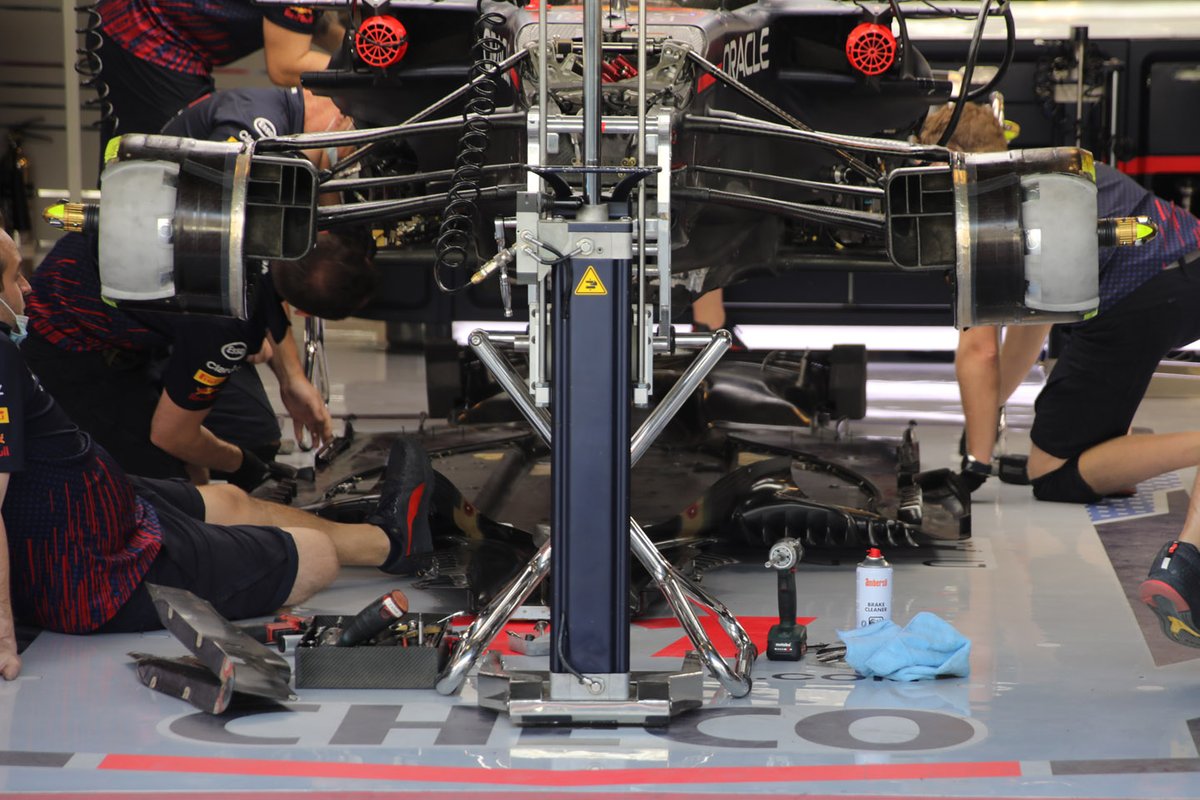 2/18
A peek inside the Red Bull garage as the team prepares the car reveals some detail of the RB16B’s floor, which awaits installation. Note the different design of the curved strakes on the leading edge of the upturned floor. 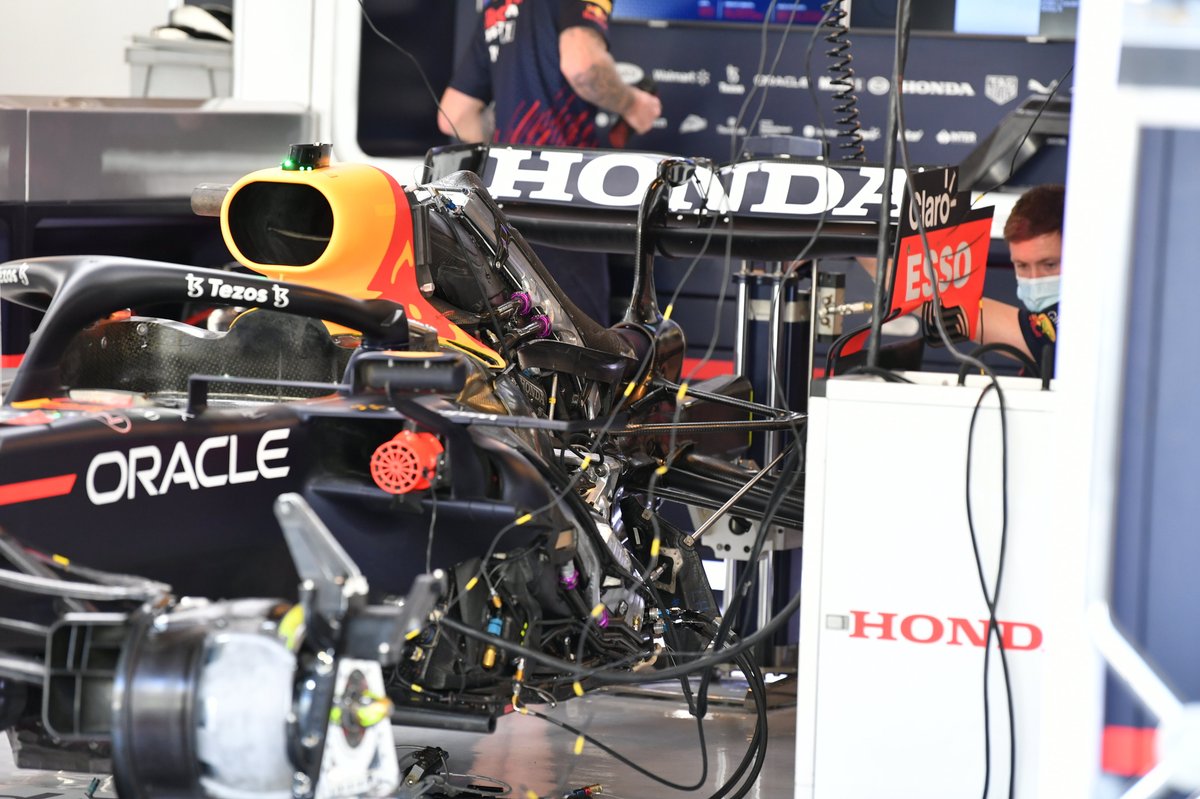 3/18
At the rear of the car we can see that the team has installed the medium-downforce rear wing on the RB16B at this early stage of the weekend.
Red Bull Racing RB16B diffuser detail 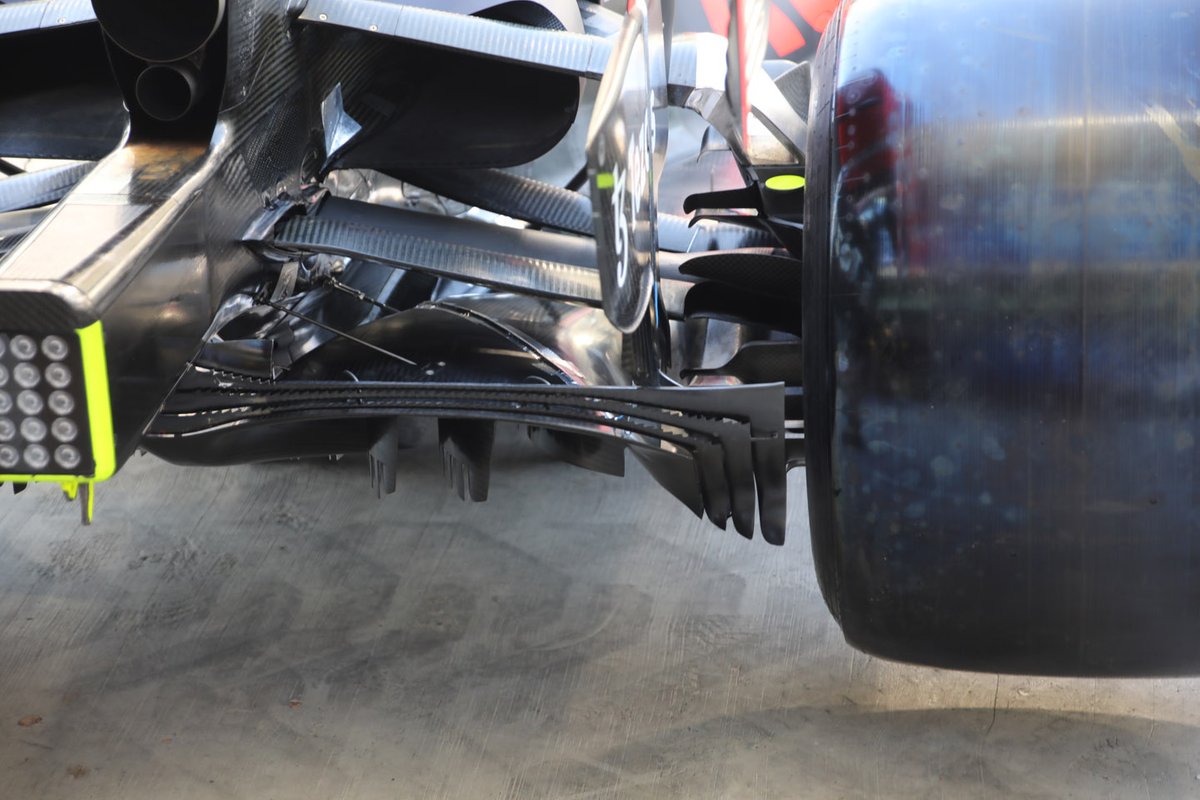 4/18
A close-up of the serrated diffuser Gurneys, rear brake ducts and suspension on the Red Bull RB16B. 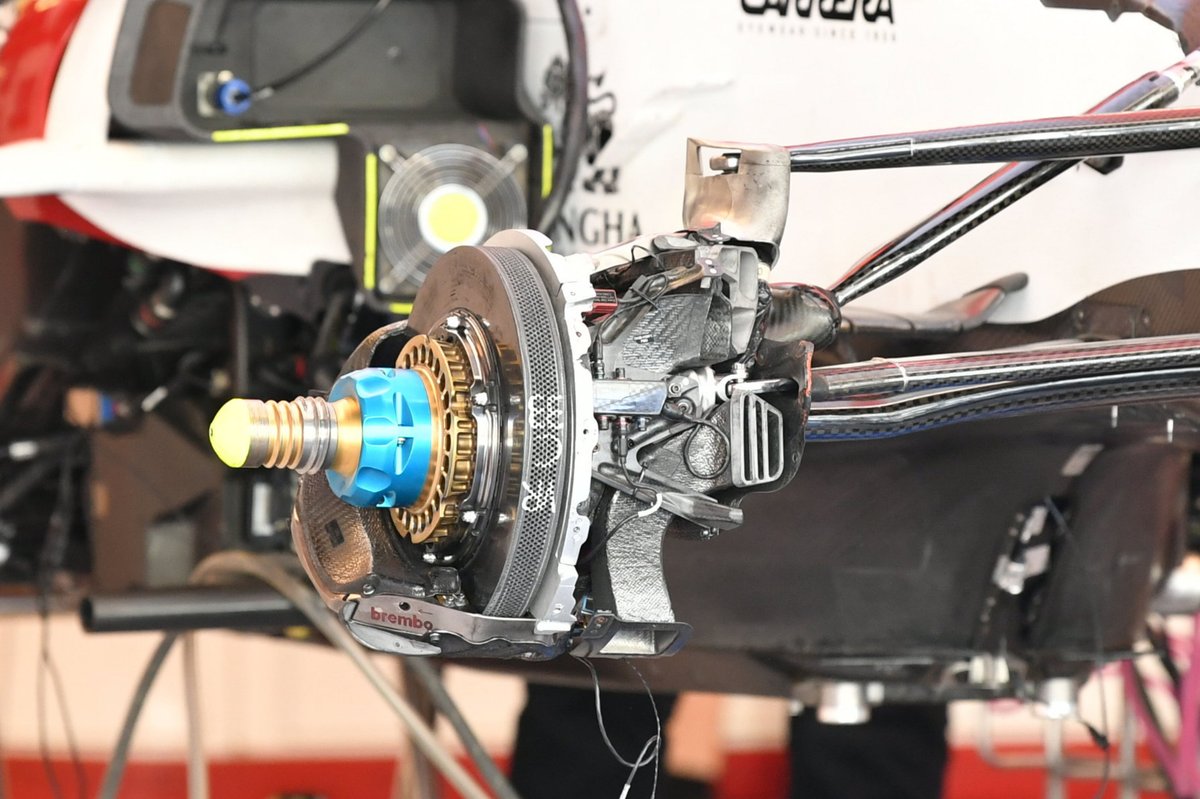 5/18
A close-up of the Alfa Romeo C41’s front brake assembly during the preparation phase shows us the internal ductwork, which is also divided up in order that the air flows through the pipework more precisely and toward its intended target.
Red Bull Racing RB16B detail 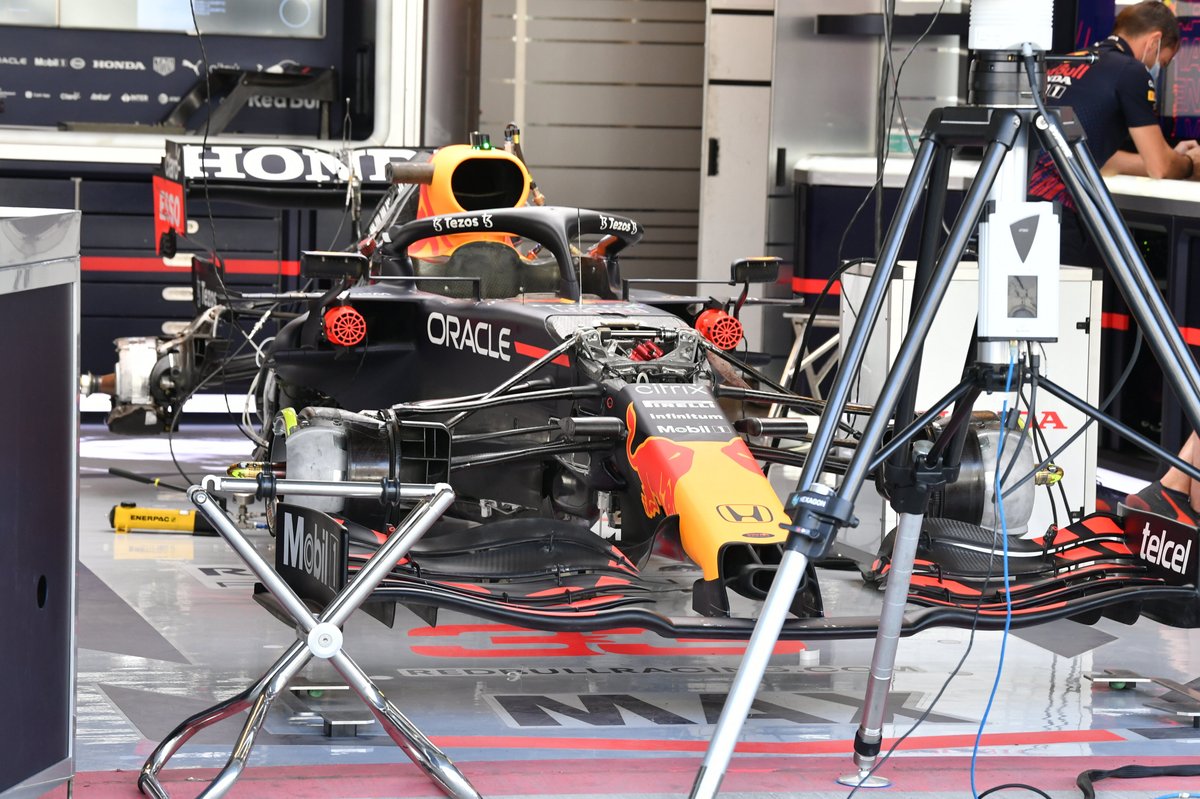 6/18
A shot of the RB16B from the front during the build-up phase gives us plenty of detail to absorb, including the exposed inboard suspension elements, the auxiliary oil tank beneath the tub and the front brake ducts with their bypass section.
McLaren MCL35M detail 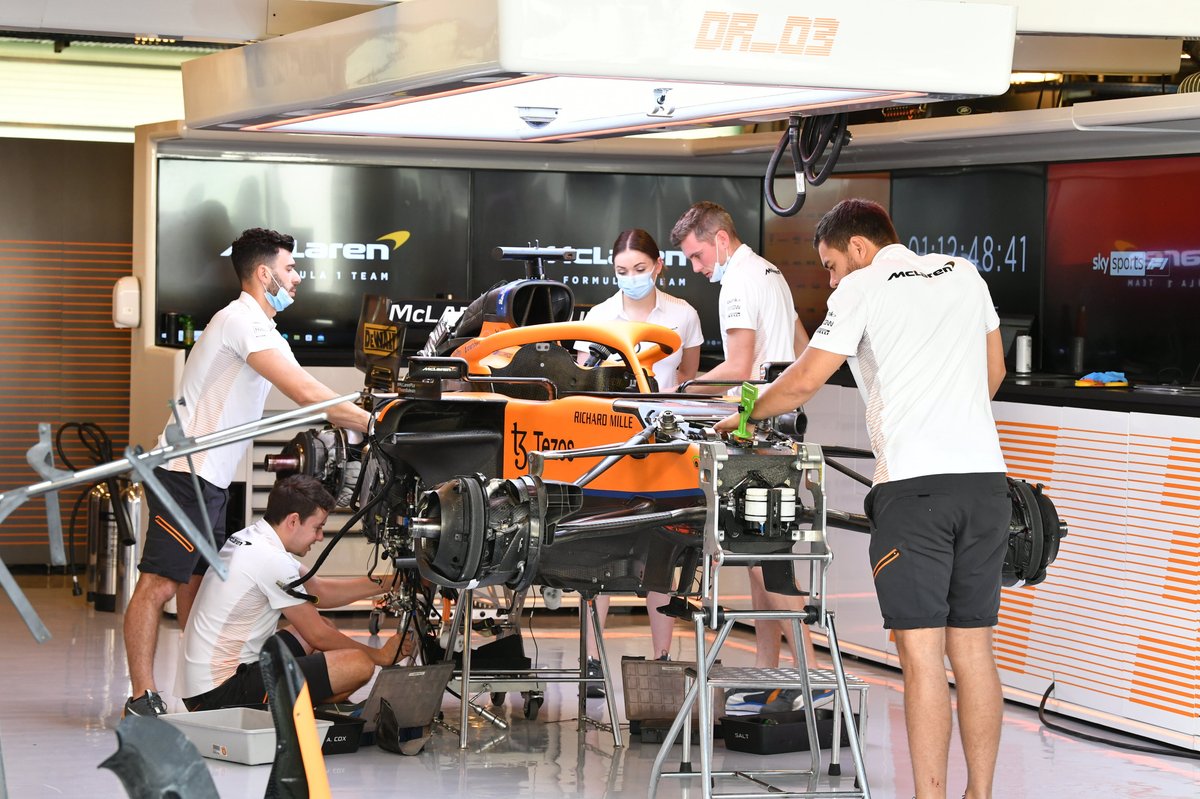 7/18
A similar shot of the McLaren MCL35M as it’s prepared for the weekend and, don’t worry, the rear wing isn’t on the wrong way round – the gearbox, rear suspension and wing haven’t been attached to the car at this stage.
McLaren MCL35M detail 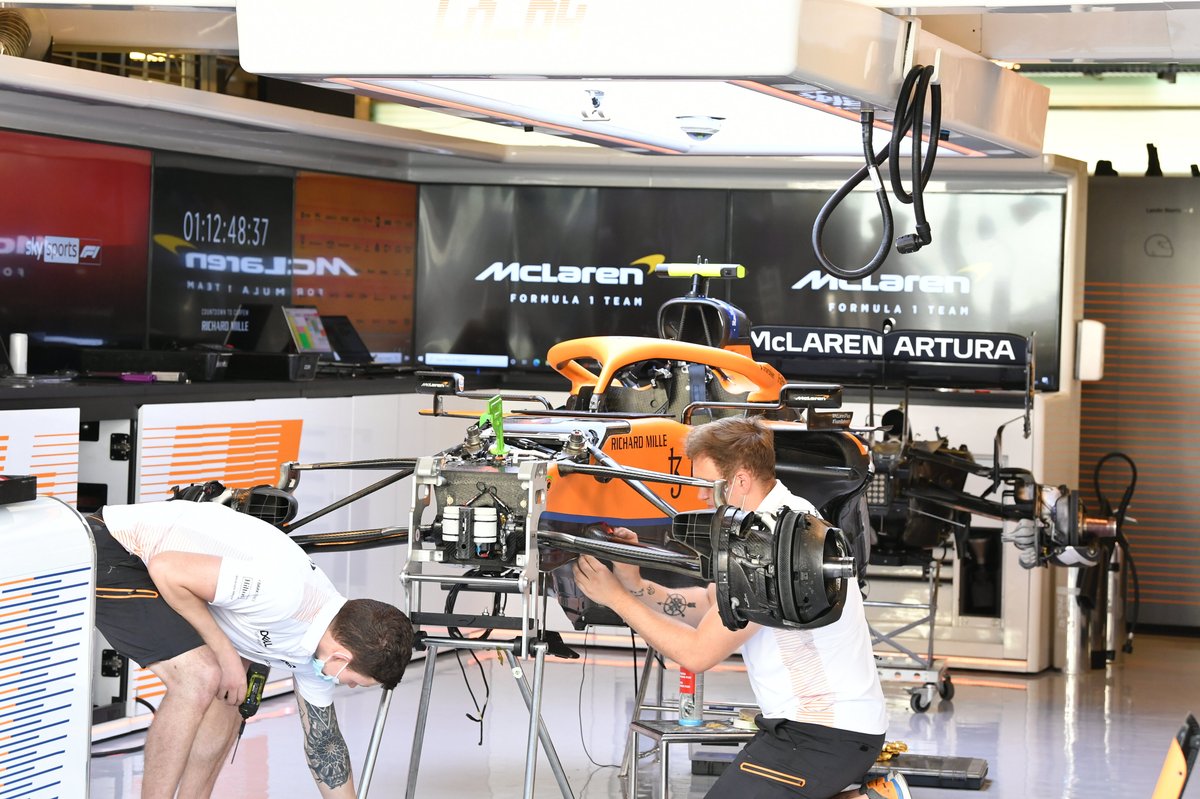 8/18
A shot from the other side and we’re able to see more of the rear suspension and rear brake assembly detail, along with the exposed front brake and suspension assemblies.
Aston Martin AMR21 detail 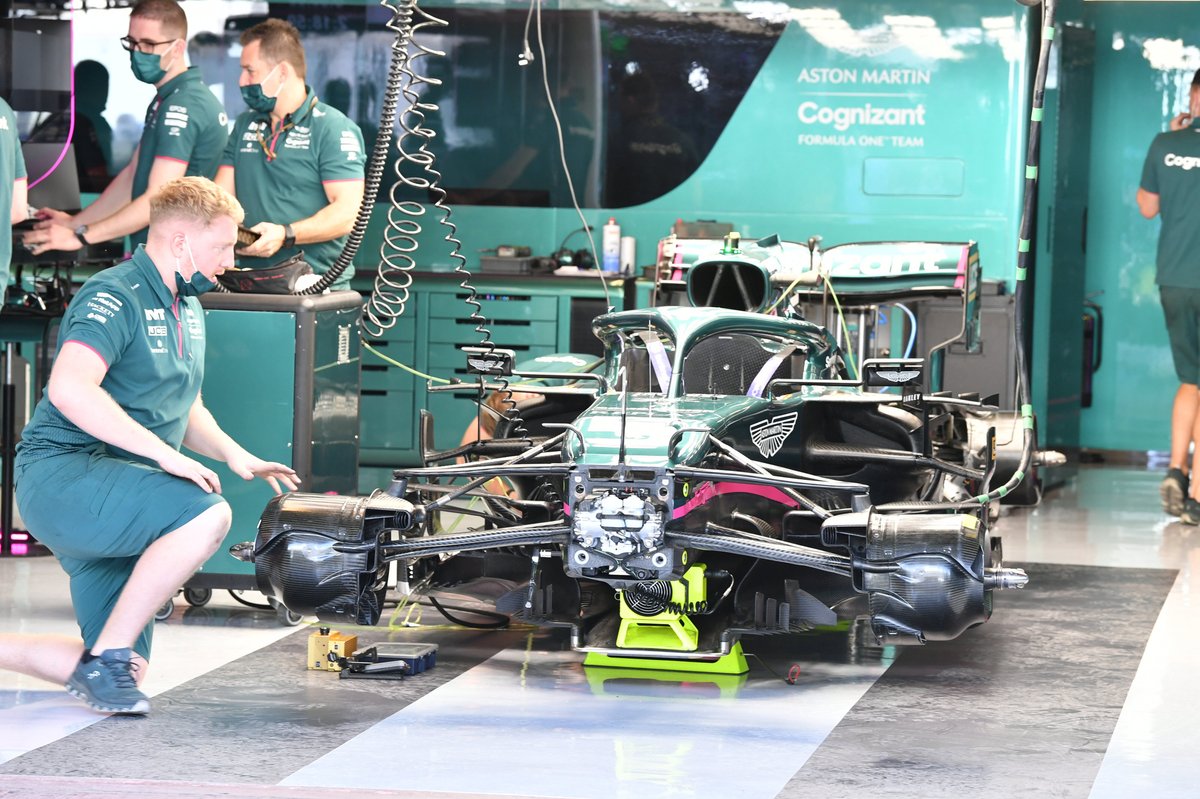 9/18
The Aston Martin AMR21 has been lowered down off the stands at this point but it’s key to note that it has mounted the lower downforce, spoon-shaped rear wing.
Williams FW43B detail 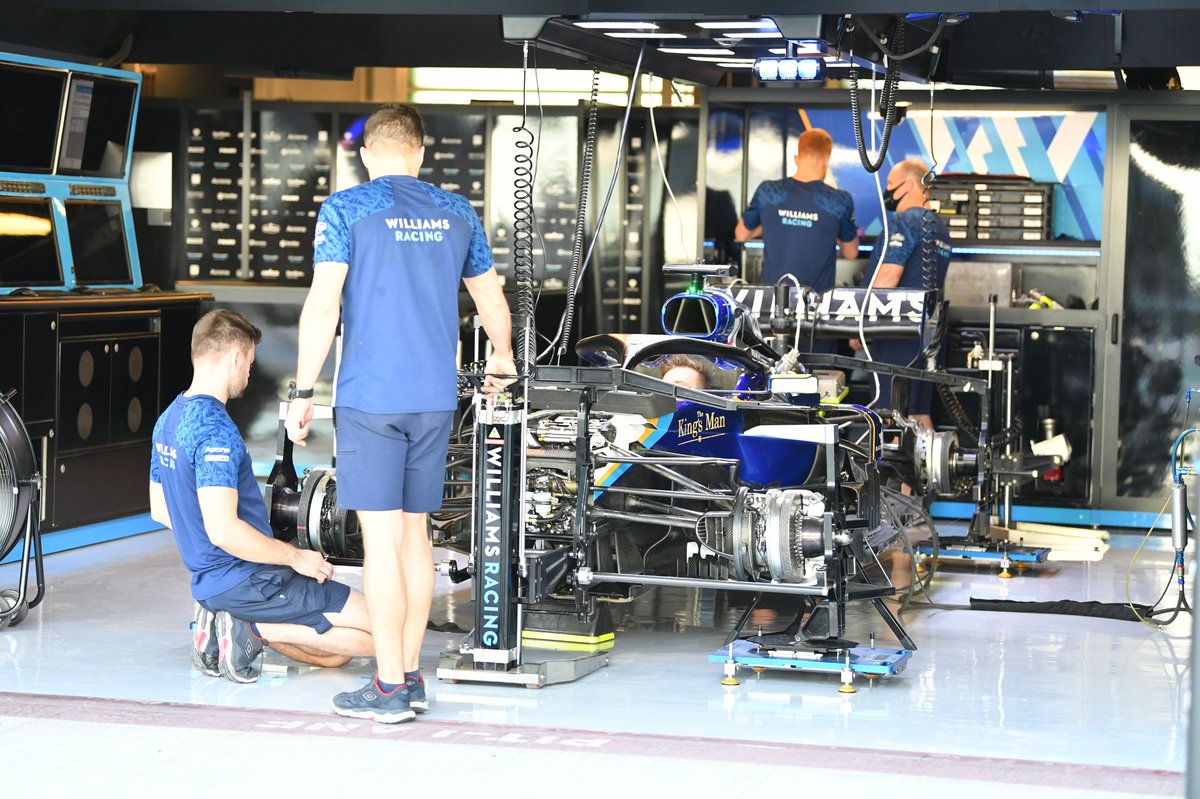 10/18
The FW43B being readied for action by the Williams mechanics exposes some of the front and rear brake details that ordinarily lies beneath the drum bodywork. Also note they have installed the spoon-shaped rear wing at this stage in the proceedings.
Williams FW43B front detail 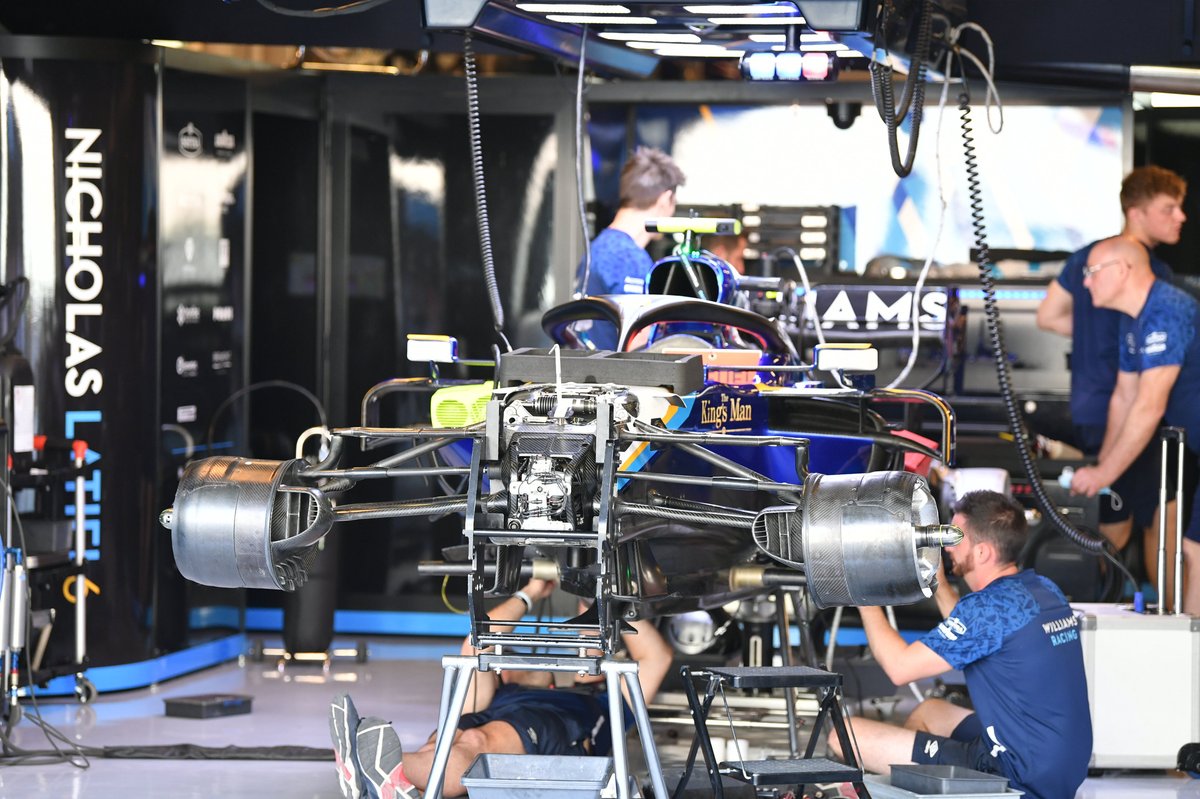 11/18
For comparison here’s the FW43B at a stage where the front brake drum bodywork has been applied but still at a point where we can see some of the inboard suspension elements.
Ferrari SF21 garage 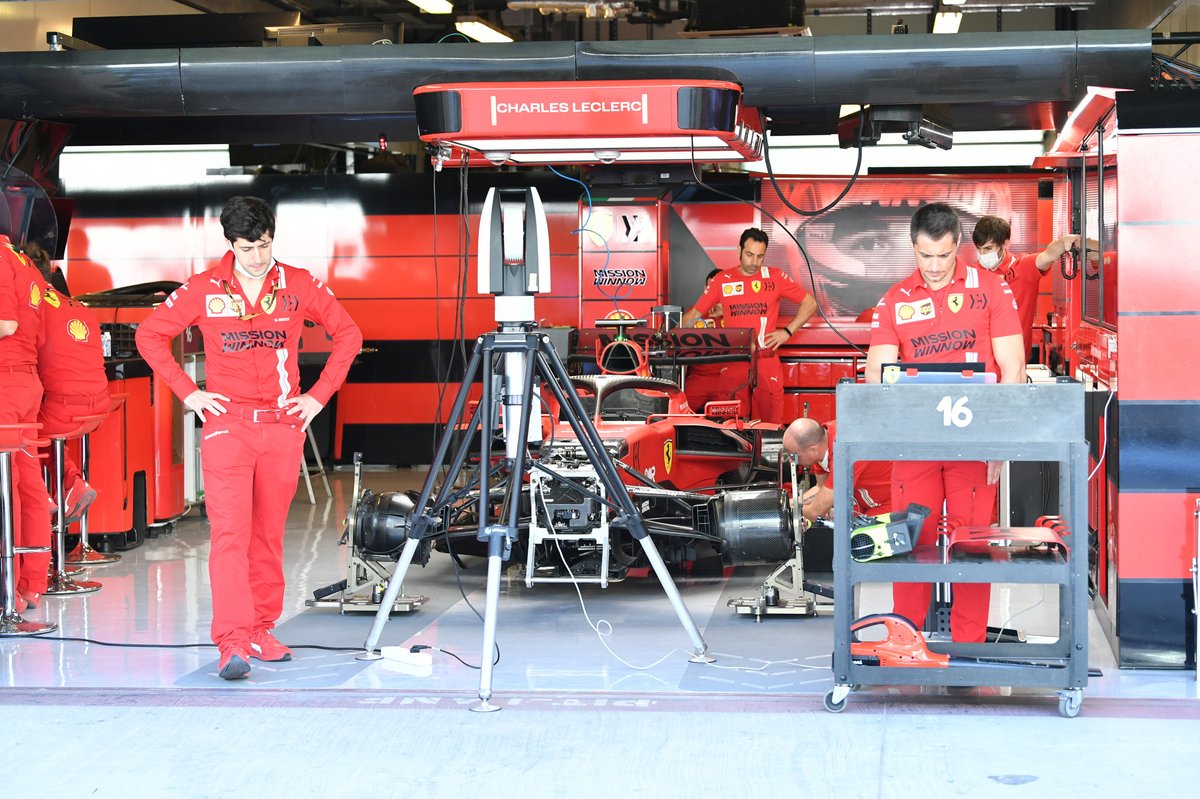 12/18
The Ferrari SF21 during preparation: Note the right-hand side front brake duct has yet to be fully constructed, giving us an idea of the airflow's pathway through the assembly when we consider the left-hand side assembly has the full drum cover attached. Also note it has installed the spoon-shaped rear wing as used in Saudi Arabia.
Ferrari SF21 front brake 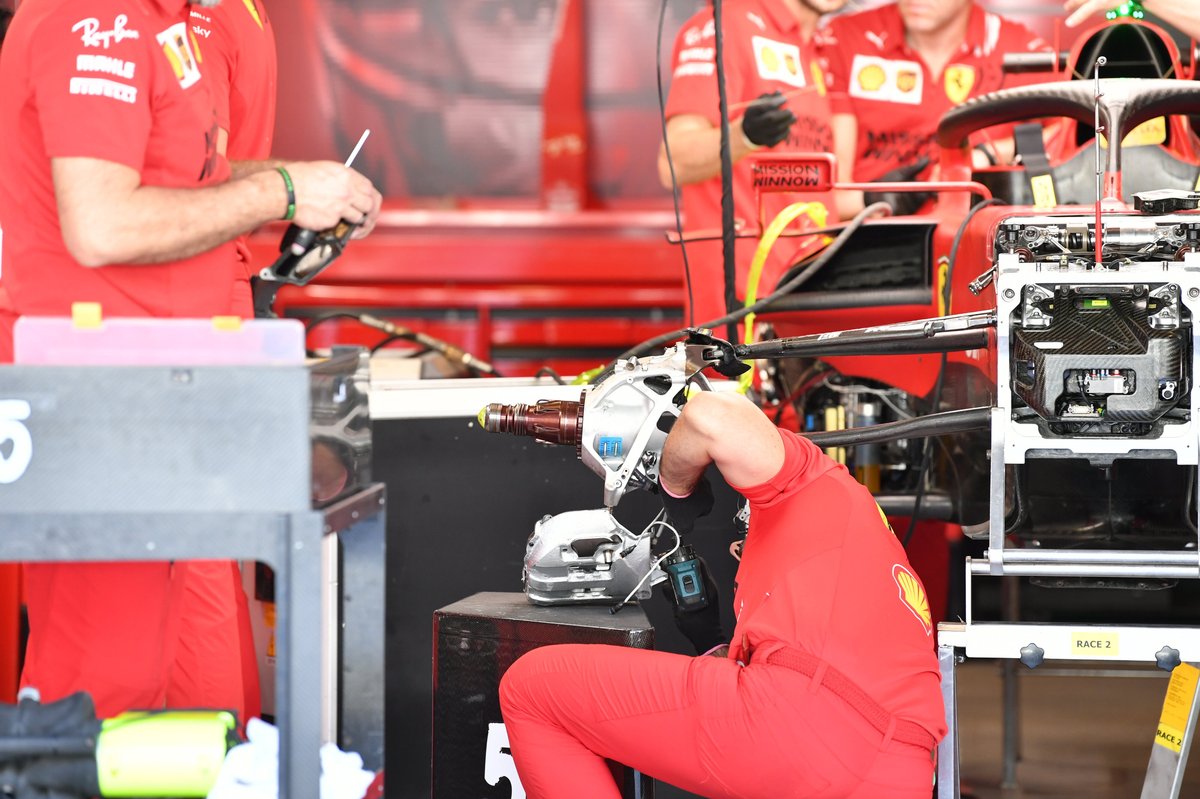 13/18
This shot of the SF21 is from a little earlier in the build process, with the right-hand side of the brake assembly not installed as yet, giving us a look at the suspension upright.
AlphaTauri AT02 detail 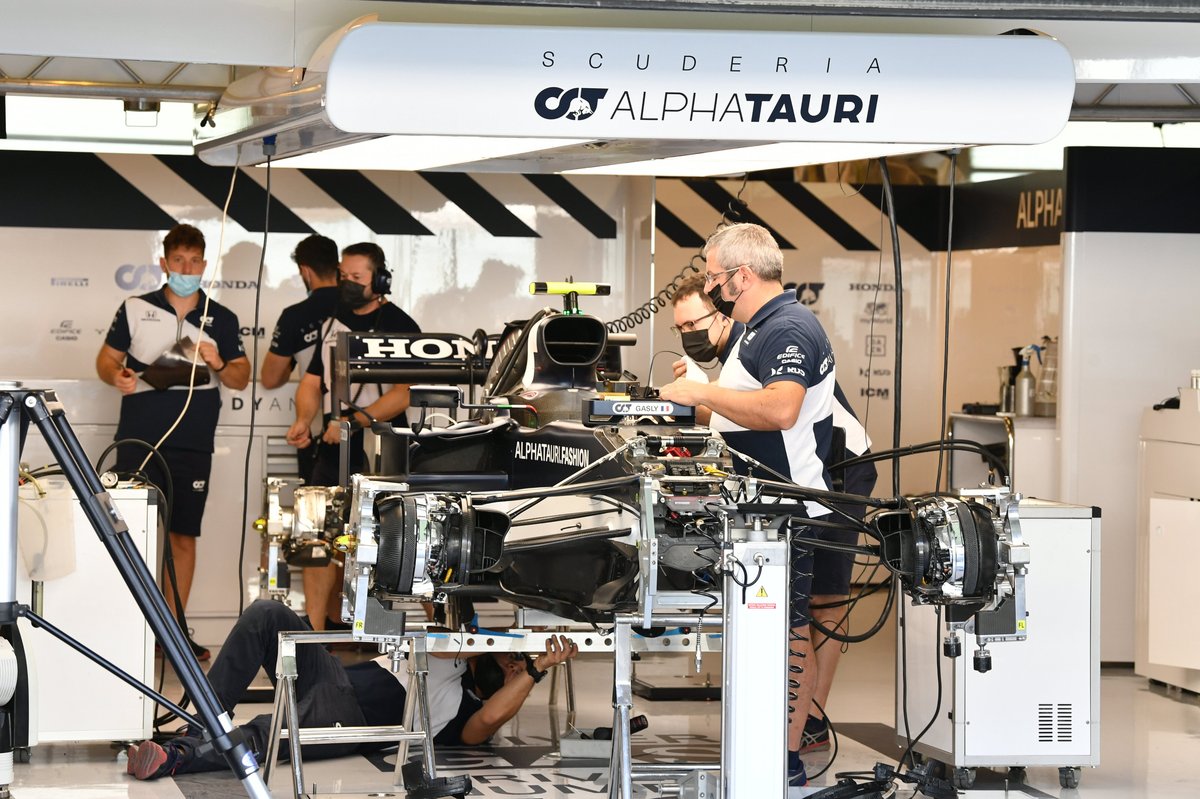 14/18
The AlphaTauri AT02 without the outer brake drums attached allows us to see some of the internal detail.
Alpine A521 front detail 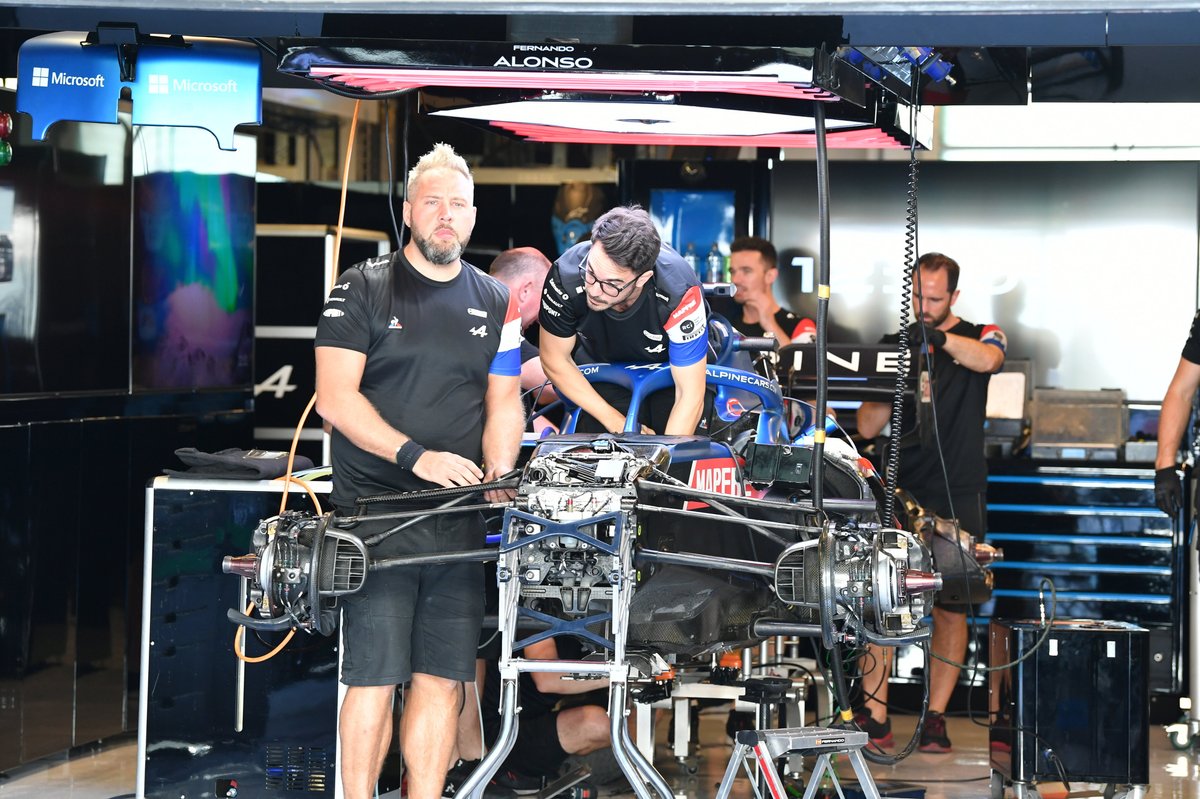 15/18
The Alpine mechanics prepare one of their cars for action and allow us to see the inboard suspension elements and front and rear brake assemblies.
Alpine A521 noses 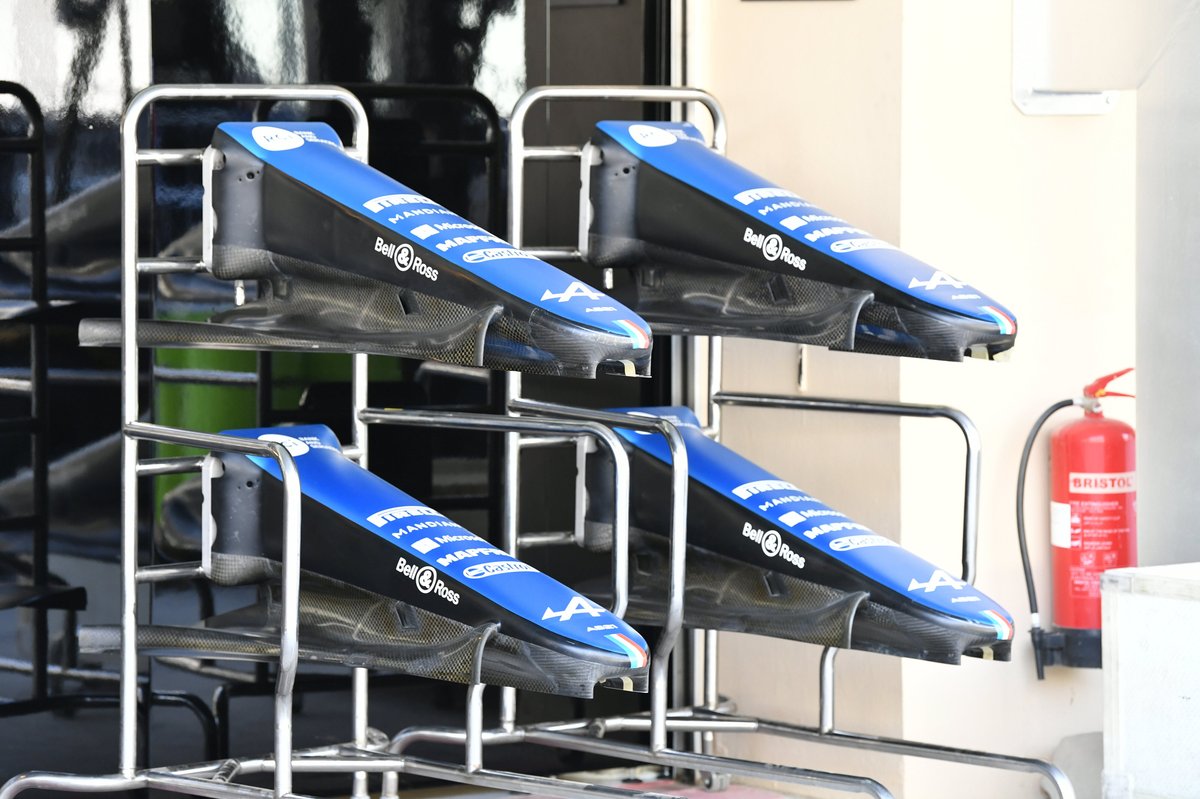 16/18
The Alpine A521’s nose and cape solution without the front wing attached shows how narrow the front wing pillars are, which enables a much cleaner pathway for the airflow toward the cape section, which drapes down quite low.
Aston Martin AMR21 front wing 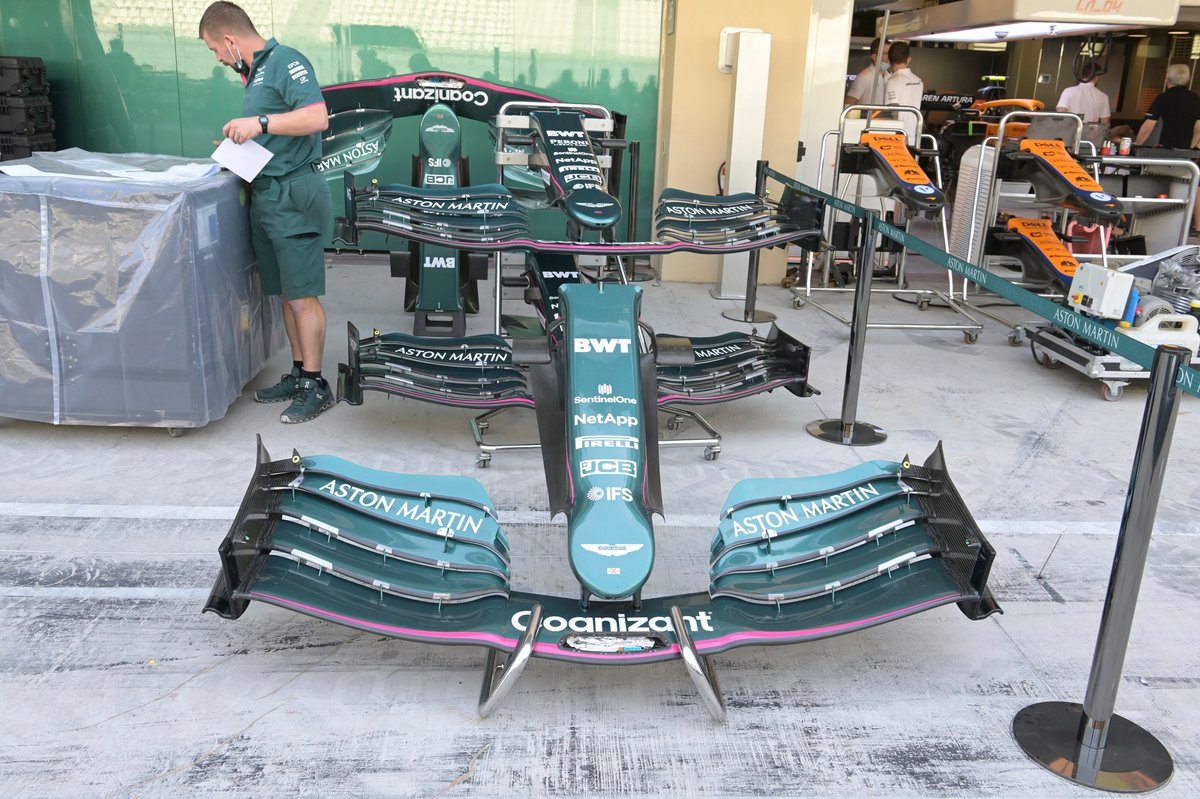 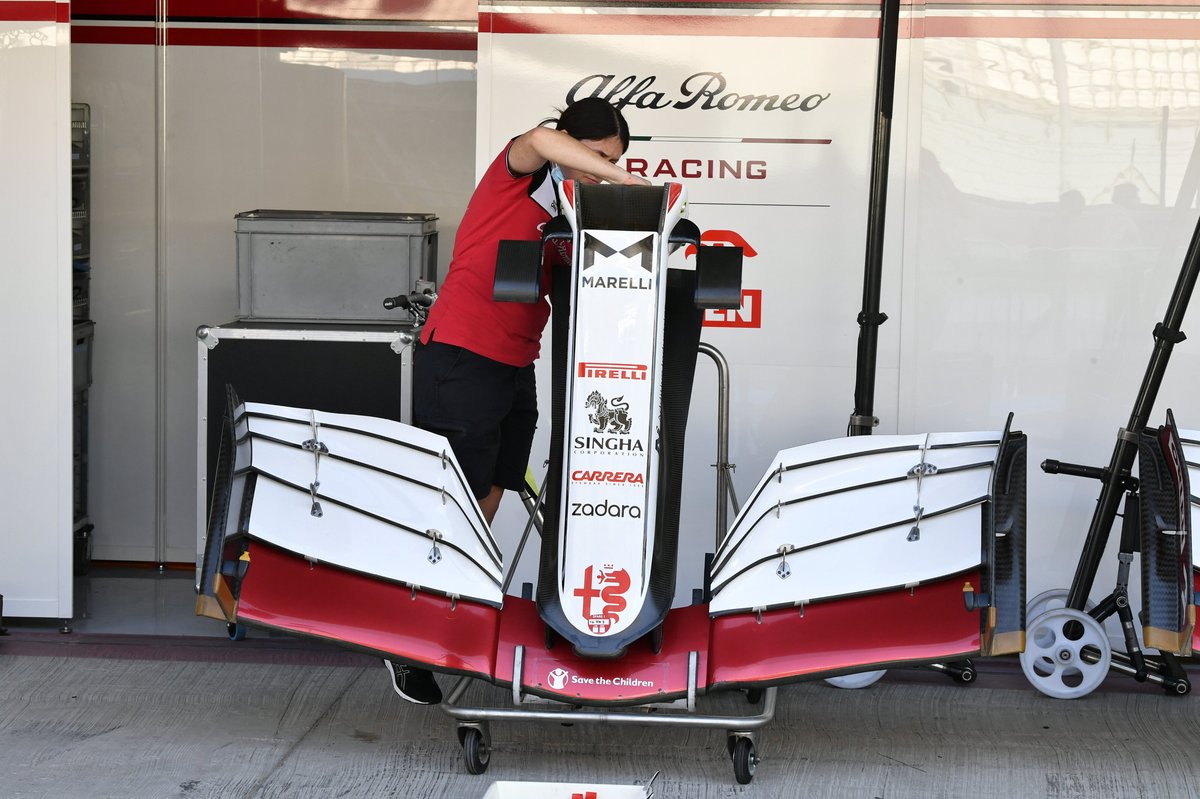 18/18
A top-down overview of the Alfa Romeo C41’s nose and front wing shows the different approach it takes to some competitors when it comes to the shape of the wing profiles.
Read Also:
shares
comments