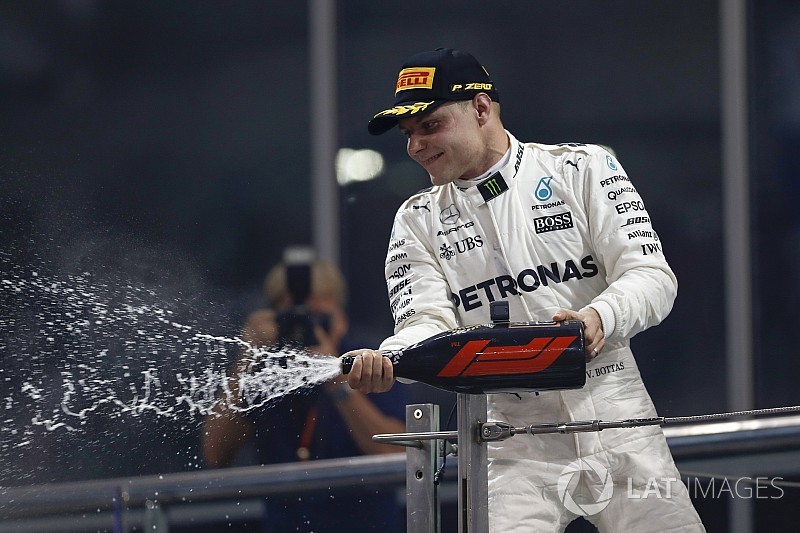 Bottas retained the lead from pole at the start and though he lost it briefly when he pitted first, he absorbed pressure from Hamilton to secure his third win of the season.

Once Bottas got through Turn 1 in the lead, he quickly opened up a one-second lead over Hamilton before gradually building it up to two seconds before the stops.

He was the first of the Mercedes drivers to pit, swapping the ultrasofts for supersofts and rejoining in second place.

Hamilton stayed out for three further laps, clocking the fastest lap in the process, but couldn't make up enough ground and rejoined behind Bottas.

The world champion attacked his teammate, briefly getting within DRS, but locked up at Turn 17, running off track before rejoining.

Hamilton kept up the pressure and even got within 0.5s after Bottas locked up but his team-mate responded by putting the hammer down and pulling away.

Hamilton crossed the line second to secure Mercedes's third one-two of the season.

Vettel had a quiet race, lapping the Yas Marina circuit in a lonely third place and ended up 19.3s adrift, ahead of Ferrari teammate Kimi Raikkonen.

Red Bull's Daniel Ricciardo was on course to finish fourth, but pulled off track and retired the car with a hydraulic problem shortly before the halfway point.

The German escaped with a five-second time penalty for leaving the track and gaining an advantage when battling Sergio Perez.

His teammate Carlos Sainz retired for the fourth time in six races after the tea did not attach the front-left tyre properly at his pitstop.

Felipe Massa completed the 269th and final grand prix in the points with 10th and celebrated with a few donuts after the chequered flag.

Romain Grosjean was involved in the race's most entertaining battle, squabbling with Lance Stroll over 13th and coming out on top.

The Haas driver finished 11th, ahead of Stoffel Vandoorne with Kevin Magnussen recovering from a first lap spin that dropped him to the back of the field to finish 13th.

Live: Follow the Abu Dhabi GP as it happens