A difficult afternoon for McLaren-Honda on the Spanish GP 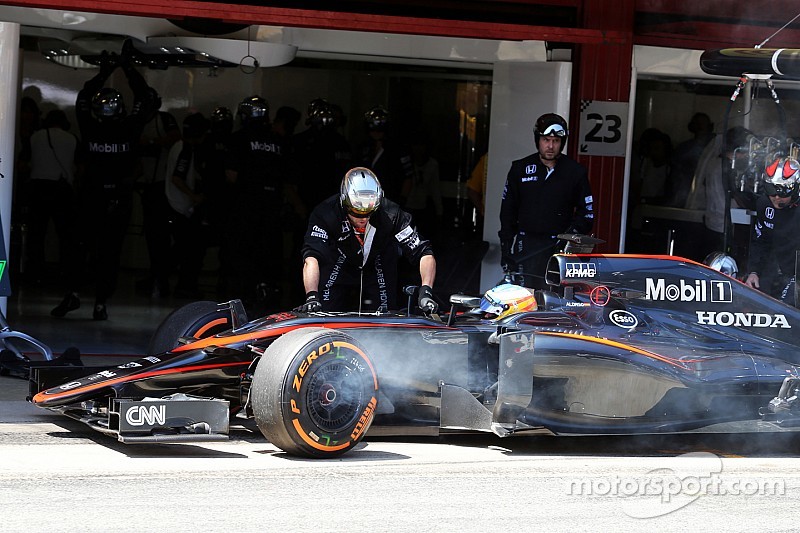 Fernando Alonso: “My pitstop was a scary moment – I didn’t have much rear braking for my whole in-lap, then even less at the stop."

Fernando Alonso retired with a rear brake problem on lap 26. His race ended during a precautionary pit-stop – to examine the rear end and change tyres – which resulted in the car losing stopping power and ploughing on through the box. Fortunately, the quick wits of our front-jack man saw him leap to safety, and no-one was injured. Fernando’s steady progress into the top 10 came to an end, however.

While the team will thoroughly trace the cause, the mechanics discovered a tear-off visor covering the right-rear brake duct when they investigated the car’s rear corner in the garage.

While Jenson Button made it to the finish, he too endured a disappointing race. He made a slow getaway, and quickly reported that his car was handling poorly, oversteering and wheel-spinning under power. Despite working with the team over the radio to find a solution, he failed to make headway, and ultimately finished 16th on a three-stop strategy.

“My car was pretty scary to drive today: as soon as I touched the throttle, it just snapped away from me. It was unpredictable: in low-speed corners, the car was just slow, because I got wheel-spin immediately; in the high-speed stuff, it was just scary, because the rear end would snap away immediately under power.

“I was talking to my engineers for most of the race to try to find out what the root of the problem was, and we switched on quite a lot of handling balance changes to try to cure it. It got a little bit better towards the end of the afternoon, but it was a pretty tough afternoon.

“Now, we’ll thoroughly look at the data and see what the matter was – it’s something we’ve got to look into.”

“My pitstop was a scary moment – I didn’t have much rear braking for my whole in-lap, then even less at the stop. It was scary for the mechanics, but luckily it didn’t hurt anyone.

“My brake issue was separate from Jenson’s problem yesterday; in qualifying, he had a single disc that wasn’t reaching temperature, but I had no brakes. I think the rear disc stopped working, so I only had front brakes.

“Things are coming together. We’re still a long way off the front and need to take bigger steps, but this is a very challenging project and I’m happy that we’re recovering well.

“This has been a disappointing day, but the team will investigate what happened, and we’ll come back stronger in Monaco.”

Eric Boullier - Racing director, McLaren-Honda: “For all at McLaren, a team that has won the Spanish Grand Prix no fewer than eight times in our illustrious history, it’s superfluous to state that this afternoon has been a more than somewhat disappointing one.

“Fernando was running reasonably well until his race was abruptly terminated by an as-yet-unspecified rear brake problem that caused him to overshoot our pit-box. That was irksome for all of us, Fernando in particular, but more important is that no-one was hurt.

“As for Jenson, he too had a vexatious afternoon, losing ground right from the start and complaining of poor rear traction thereafter. He eventually finished 16th.

“We arrived in Spain with robust but measured ambitions: to manage both our cars through to Q2 in qualifying and to score world championship points for the first time this year. The former objective we achieved; the latter we did not.

“Disappointing it was, but disheartening it isn’t. Yes, we’d all be more sanguine if progress could be made more expeditiously; equally, and importantly, our underlying pace is improving with every race.

“In two weeks’ time we’ll be in Monaco, on whose famously serpentine Tarmac we’ll be hoping to fare appreciably better than we did here in Barcelona today. McLaren has won at the Principality more often than has any other marque – 15 times to be precise – and, although we aren’t anticipating notching up victory number 16 there this year, I won’t shy away from proclaiming here and now that we’ll be aiming to score world championship points on May 24th.”

Yasuhisa Arai - Honda R&D senior managing officer – chief officer of motorsport: “It has been a very disappointing weekend, but, sometimes, that’s the reality of racing.

“On a more positive note, Fernando’s race pace was very good. We’ll now analyse all the data and continue to improve driveability for the next race at Monaco. That will be key to progress around the slow street circuit.”

After an eventful Spanish GP, Lotus' Grosjean finish in 7th

No points for Sauber after solid performance on the Spanish GP