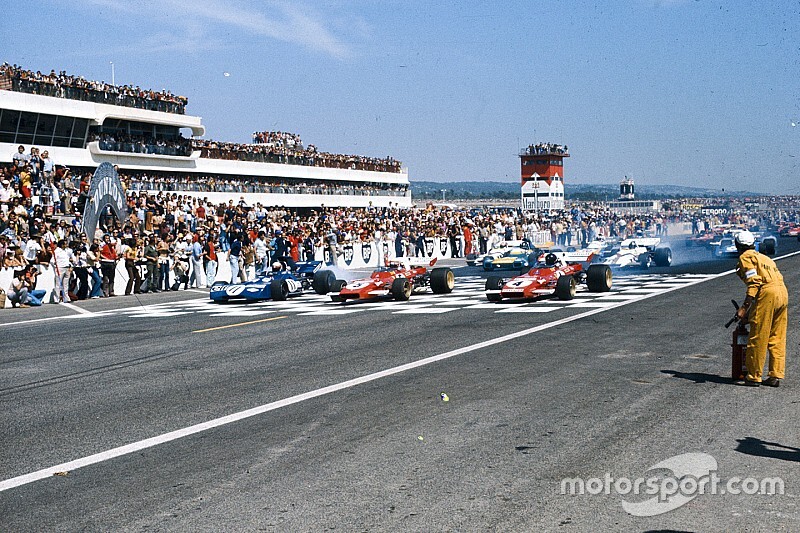 The French Grand Prix is one of the most historic and important motor races in the world. Indeed, the first running in 1906 was the genesis of 'Grand Prix racing'.

Since the beginning of the Formula 1 world championship in 1950, the French GP has been held at seven circuits. Its current home is Circuit Paul Ricard, which has so far held 16 GPs, the first of which came in 1971.

The mix of long straights and twisty sections has helped create some great races over the years. Time to pick out some of the milestone moments.

1973 – A first win for Peterson, and a special home GP for Cevert 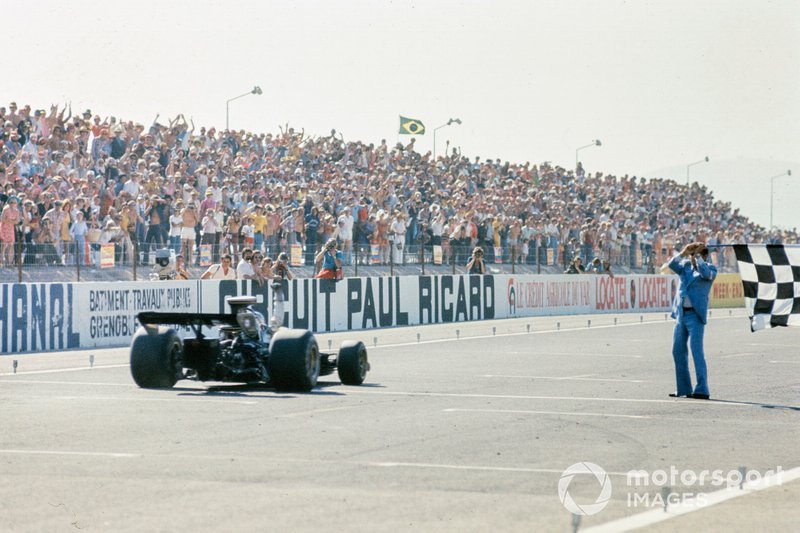 Paul Ricard’s second French GP was dramatic and involved a star rookie, a clash between the leaders and a first victory for a legend.

Rookie Jody Scheckter took the lead from the off in McLaren’s sensational M23. Lotus ace Ronnie Peterson, after a great getaway from row two, chased initially in a tight lead bunch that also included home hero Francois Cevert. The M23 had prodigious straightline speed, allowing Scheckter to hold Peterson off. The Swede eventually decided to let team-mate and reigning world champion Emerson Fittipaldi through to attack the McLaren.

Somewhat surprisingly, Fittipaldi made an optimistic move into the final right-hander after Scheckter had been delayed in traffic. Scheckter held his ground and the two clashed, putting both out. Poleman Jackie Stewart and Denny Hulme had already suffered tyre issues, leaving Peterson to take a very popular first F1 world championship victory at his 40th attempt.

1980 – 7 French drivers on the grid, Jones defeats the Ligier twins 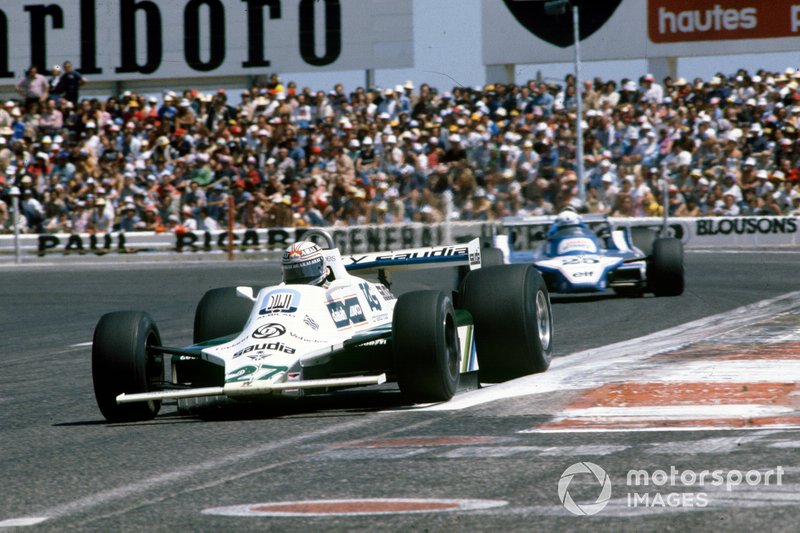 Williams driver Alan Jones started fourth and ran in that spot during the early stages, while poleman Jacques Laffite’s Ligier set the pace. Jones, Rene Arnoux’s Renault and the second Ligier of Didier Pironi engaged in a brilliant early battle, the trio swapping places several times before the Williams established itself at the front of the queue on lap eight.

At that stage Jones was eight seconds behind Laffite, but the Ligier was suffering from worsening understeer and the Williams closed in. With 20 laps to go Jones took the lead.

Pironi – one of seven French drivers in the race – overcame the struggling Laffite, but could not catch Jones, the Australian taking victory by 4.5s in what he believes was one of his best drives. 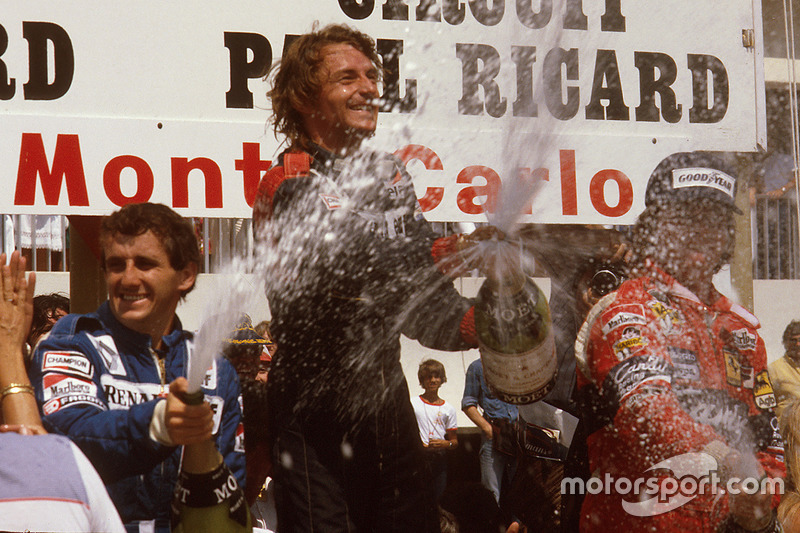 It’s not often that drivers from one country fill an F1 podium and doing so at their home event is even rarer. But that’s what happened in the 1982 French GP.

Once the engines had failed on the Brabham-BMWs of Nelson Piquet and Riccardo Patrese, Rene Arnoux led Alain Prost home in a comfortable Renault 1-2, while Didier Pironi’s Ferrari completed the podium. The French dominance extended beyond that, as Patrick Tambay was fourth in the second Ferrari!

Despite the success, not everyone was happy on the podium. Prost still had a realistic chance of winning the drivers’ title and there had been a pre-race agreement that Arnoux would help him if the chance arose.

Arnoux didn’t and damage to Prost’s ground-effect ‘skirt’ meant there was nothing he could do about it. 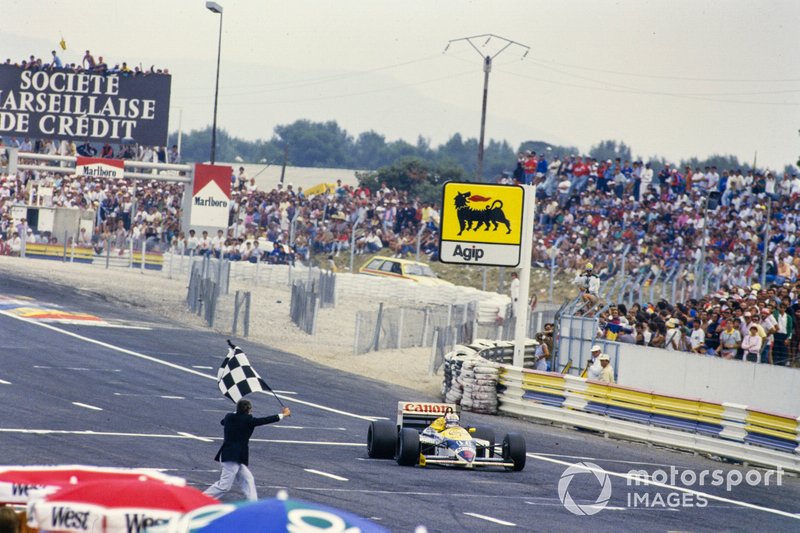 Frank Williams is one of F1's most famous team bosses, and the Williams-Honda FW11 would put the team back on top in 1986. But before that season got underway, Williams suffered a terrible road accident returning from a Paul Ricard test, leaving him a tetraplegic.

When the team returned for the French GP, round eight of the season, it was leading the constructors’ championship and Nigel Mansell and Nelson Piquet had already racked up three wins. Ayrton Senna’s Lotus took pole in France, but Mansell took the lead at the first corner. Alain Prost’s one-stopping McLaren provided the toughest challenge, but the two-stopping Mansell took a clear victory by 17 seconds.

Team-mate Piquet came home third to add to the team’s joy, helping Williams on its way to another constructors’ crown. 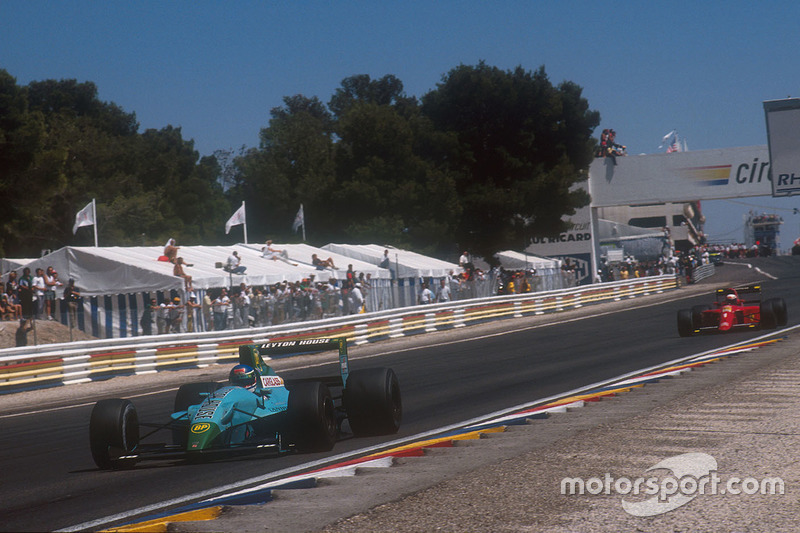 A Ferrari, two McLarens and another Ferrari in the top four. The grid for the 1990 French GP looked pretty familiar for the time, but the race itself almost gave F1 one of its biggest upsets.

The Leyton House-Judds were sporting a new aerodynamic package and it clearly worked, Ivan Capelli lining up seventh, Mauricio Gugelmin 10th. But more was to come.

Gerhard Berger grabbed the lead at the start, chased initially by poleman Nigel Mansell (Ferrari) and then his McLaren team-mate Ayrton Senna. Ferrari’s Alain Prost had made a poor start and found himself stuck behind the Williams of Riccardo Patrese.

Just before one third distance Prost became the first of the frontrunners to stop for tyres, while Senna passed Berger for the lead. Both McLaren stops were poor, dropping them from contention, while Capelli and Gugelmin moved into first and second as all the other top drivers came in for fresh rubber. Would they stop again?

The answer was no. After 35 of the 80 laps, Capelli led Guglemin by 7.5s, with a charging Prost right behind the second CG901. It took the Ferrari until the first corner of lap 54 to pass Gugelmin, at which point Capelli’s lead was 5.8s.

Prost rapidly caught the surprise leader, but finding a way by proved much harder. Capelli held firm and a hesitant Ferrari engine made Prost’s job harder. Finally, with less than three laps to go, Prost got a good run through Signes and dived down the inside at the Beausset right-hander to deny Capelli a dream victory.

Prost went on to take his fifth French GP victory and Ferrari’s 100th world championship F1 win. Capelli’s engine began to falter, but still he came home a heroic second, ahead of Senna. It was a fitting way to celebrate Paul Ricard’s 20th birthday.