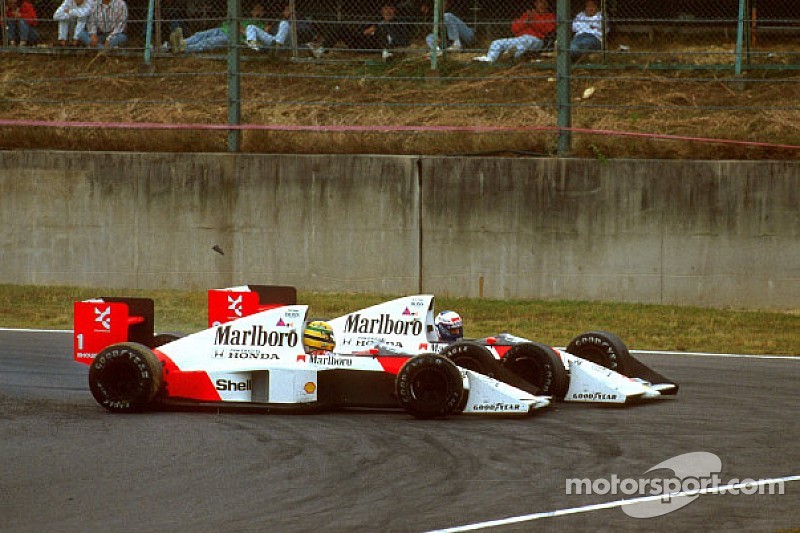 Today marks the 25 years since one of the most intense F1 rivalries ever reached an unbelievable climax.

October 22nd. That date is very significant in the F1 community and even more so now. On this day, 25 years ago, the greatest F1 rivalry that ever was escalated to a spectacular climax.

Going into the penultimate round of the 1989 FIA Formula One World Championship, Alain Prost held a 21 point advantage over McLaren teammate Ayrton Senna. Senna started the race from pole position, but that edge quickly vanished when the lights went green. Prost launched off the grid as Senna stumbled away, falling behind.

He was now the hunter, knowing it was imperative that he cut into his teammate's points lead if he wanted any chance at the title in the finale. With just a handful of laps to go, the notoriously precise Brazilian-born racer made his move.

Was the opening there? Yes. Did it stay that way? No. Prost turned in but Senna was already alongside and the two collided. Fans, teams, and media alike looked on disbelief. Prost wasn't too concerned though. In fact, he may have been mildly relieved by the outcome. He jumped from the stricken car almost immediately as Senna shoke a fist at him.

With both drivers out of the race, he was assured the championship was his. There was just one problem. Senna wasn't done. Refusing to throw in the towel and concede defeat, he motioned to the marshals that he was attempting to rejoin the race. As Prost looked on from the sidelines, Senna rocketed through the chicane as fast as one possibly could.

He limped back around the track with a broken nosecone, pitting to replace it. Then, Senna put his head down and drove like a man possessed. He made the pass for the win in, ironically, the same corner he and Prost came together. Alessandro Nannini couldn't put up much of a fight.

He won the race, threw himself back into the title fight ... Or so he thought. While he was driving the race of his life, Prost had gone to speak with the powers that be.

This ugly thing called politics came into play. Senna was disqualified by the stewards for cutting the chicane, despite the obvious fact that he gained no competitive advantage. In fact, attempting to rejoin the circuit without cutting the chicane could have been a potentially hazardous situation considering where his car came to rest following the crash.

McLaren and Senna appealed the penalty, but their efforts did more harm than good. He was slapped with a six figure fine, labeled a 'dangerous driver' by the FIA, and suspended for six months. Senna and many of his supporters were quick to point out the friendly relationship between FISA President Jean-Marie Balestre and fellow Frenchmen Alain Prost, but the FIA dismissed the claims that favoritism played a role in the decision. Senna almost left the sport as a result, "I am a professional but I'm also a human being," he said.

The following year, Senna would have his vengeance. He and Prost were once again locked in an intense fight for the championship. Although he was the pole-sitter, Prost was going to be given what most of the field considered the preferred line for the start. Senna was done with the games. He had enough and was recorded saying, "I was (expletive) by the system many times. Today, it had to be my way."

These two make the Hamilton/Rosberg rivalry look like child's play.

That was Ayrton Senna. Many have a distaste for his ruthless style and his checkereds or wreckers mentality. Personally, I love it and crave for my racers like that. Did Prost intentionally turn into Senna or was he simply trying to enter the corner? That debate rages on so feel free to add your opinion to that discussion with the below poll. And remember...

"If you no longer go for a gap that exists, you are no longer a racing driver."