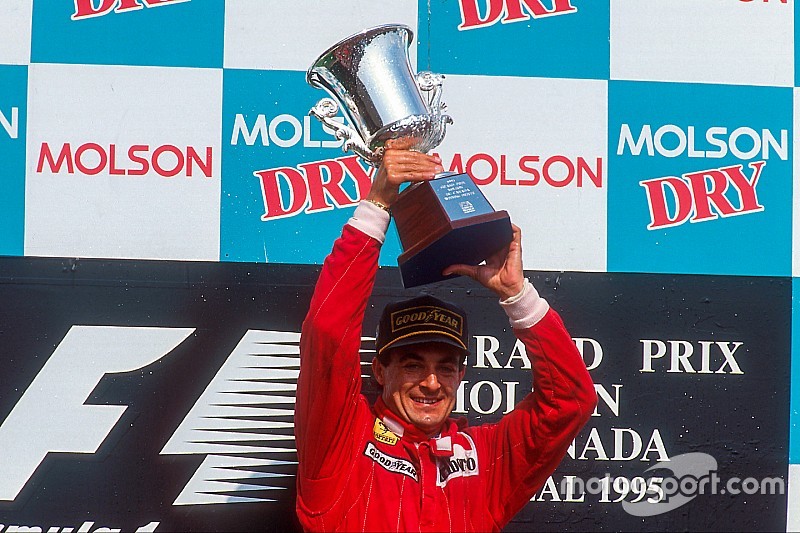 Rene Fagnan looks back on the day when Jean Alesi captured his first and only Formula 1 victory in Montreal, on the day of the Frenchman's 31st birthday.

Alesi was a frontrunner in International Formula 3000 for Eddie Jordan’s team when he made his F1 debut in front of his home crowd at the French Grand Prix at the Paul Ricard circuit, driving for Tyrrell. Alesi qualified 16th, but ran a brilliant race to claim fourth position at the end.

Alesi drove for Tyrrell in 1989 and 1990 before the French-Sicilian got an offer he couldn’t refuse from Ferrari, who he joined in 1991. But he had joined the Prancing Horse just as it was going into a competitive rut, and it took him four-and-a half years to score his first victory.

In the early part of 1995, reigning champion Michael Schumacher was the man to beat in his mighty Benetton B195-Renault, having won three of the first six races of the year.

The German put his car on pole position in Canada with a time of 1m27.661s, four tenths of a second quicker than Damon Hill, second on the grid, in his Williams FW17-Renault.

Hill’s teammate David Couthard qualified third in front of Gerhard Berger, the best of the Ferrari drivers, Johnny Herbert in the other Benetton and Alesi in the second Ferrari.

At the start of the race, Schumacher led the way into the tight Senna corner. Hill was second ahead of Berger, with Rubens Barrichello moving up to fourth in the Jordan 195-Peugeot.

Soon however, Hill was experiencing difficulties with his Williams, and started losing positions. He dropped to third behind Alesi and then to fourth behind Berger before he retired with a gearbox hydraulic failure on Lap 51.

At this point, Schumacher was clearly in the lead ahead of Alesi and the two Jordans of Barrichello and Eddie Irvine.

“I didn’t qualify very well and I was extremely motivated to take a good start,” Alesi told Motorsport.com recently about his very popular first victory.

“I was very aggressive and made up a few places during the opening laps. I then found myself in second position behind Michael. He was not that far away from me. I pushed a little bit more, but I couldn’t catch him.”

However, disaster struck for Schumacher with just 11 laps to go. His Benetton suffered from an electrical problem, and got stuck in third gear. The German pitted and the crew changed the steering wheel, the electronics were reset and Schumacher was sent back out, down in seventh place.

Alesi was not aware at all that Schumacher was in trouble.

“I suddenly realised that there was some panic in the grandstands,” Alesi continued. “Something big was happening!

"I didn’t know at the time that spectators had just seen Michael pitting on the big TV screens! It was just at the end of the lap and my guy with the pit board didn’t have time to react to it.

"One lap later, I saw with the board with ‘Alesi P1’ on it. The rest of the race was just pure joy for me.”

Chaos at the end

Barrichello was too far back to try to challenge Alesi - and the Canadian fans were so ecstatic that they started to invade the track even before the race had finished.

There were several terrifying near-misses as cars raced to the finishing line, meaning the official classification was established on lap 68 when the track was clear, and not lap 69 when the chequered flag was waved.

Alesi won his first F1 race, 31.4 seconds in front of Barrichello and Irvine in their Jordan-Peugeots. Olivier Panis was fourth in the Ligier-Mugen, while Schumacher and Gianni Morbidelli in the Footwork-Hart completed the points scorers.

“It was great to win, but it was even better to win in Montreal,” Alesi added. “It had a sweet taste. Most of the time you win races and the fan give you a round of applause. But it was really fantastic in Montreal. I think the entire crowd was alongside me, cheering for me.

"It was my first F1 victory, driving the No. 27 Ferrari of Gilles [Villeneuve]. It was an incredible feeling!

"That night, I went to have dinner in an Italian restaurant. When I entered the room, the whole place got up and applauded me. This couldn’t have happened anywhere else but Montreal.”