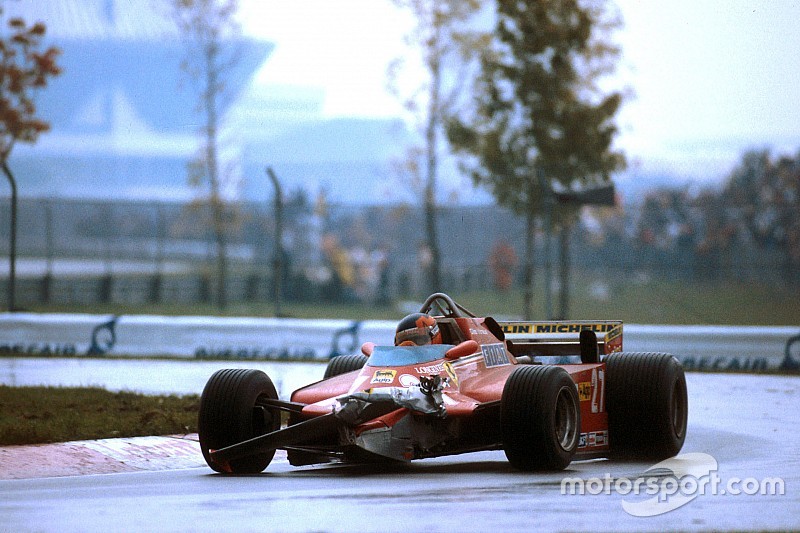 The 1981 Canadian Grand Prix saluted what was to be Jacques Laffite’s sixth and final win in Formula 1, but the race will always be remembered for Gilles Villeneuve’s heroic drive.

Held September 27th, the Canadian F1 Grand Prix was the penultimate round of the 1981 season. Only three teams – Renault, Ferrari and Toleman – raced a 1.5-litre turbocharged engine that that time while all other teams relied on the venerable Ford Cosworth DFV V8 engine or the screaming Alfa Romeo and Matra V12s.

For the first time, there were two Villeneuves entered in the race. Gilles was behind the wheel of his usual No. 27 Ferrari 126CK turbo while his younger bother Jacques inherited Siegfried Stohr’s ill handling Arrows A3.

Nelson Piquet planted his Brabham BT49C-Ford on pole position ahead of Carlos Reutemann’s Williams FW07C-Ford, Alan Jones in the sister Williams and Alain Prost in the Renault RE30. Nigel Mansell qualified fifth in the Lotus 87-Ford while Gilles Villeneuve was down in 11th place.
Gilles’ brother Jacques didn’t qualify the Arrows.

“The car handled okay, but the Pirelli qualifying tires barely lasted one lap. I was not qualified near the end of the final session, and every time I took to the track, I found myself stuck in slow traffic and unable to set a faster time,” Jacques Villeneuve recently told Motorsport.com.

The full ground effect cars were fitted with extremely hard suspension to get the best suction from the venturi sidepods. On the bumpy surface of the Ile Notre-Dame circuit, the cars kept hopping dangerously like skateboards, sometimes with all four wheels up in the air. Drivers were shaken badly, to the point of not being able to keep their right foot on the throttle!

Unfortunately, the race was held in torrential downpour and 12 out of the 24 starters crashed out of contention or encountered terminal mechanics problems.

Jones took the lead from the start, but was passed by Prost on Lap 6. Six laps later, Laffite used the excellent driveability of his V12 Matra and the superior adherence of his Michelin tires to power into the lead. Meanwhile, Gilles Villeneuve was flying. By Lap 6, he was already in fifth place and jumped into second position on Lap 14.

John Watson, in the innovative McLaren MP4/1-Ford made of the first carbon fibre chassis, was a man on a mission. On Lap 37, he demoted Villeneuve from second place. The Michelin rain tires fitted on Laffite’s Ligier and Watson’s McLaren were by far superior to the Goodyears that day.

On Lap 40, Villeneuve tried to pass Elio de Angelis who was a lap down in his Lotus. However, the two cars collided, breaking the front wing of the Ferrari, which remained attached to the car. The wing kept moving and suddenly, it began to fold up over the cockpit of the Ferrari. That didn’t bother Villeneuve at all.

The Canadian kept his right foot down and tilted his head to the side to see where he was going! Most drivers would have retired in such conditions, but not Gilles!

With eight laps to go, the strong airflow finally dislodged the broken wing, which flew away. Villeneuve managed to keep running until the chequered despite the fact that he had lost all front downforce.

Laffite crossed the line in first place, 6.2s in front of Watson and almost two minutes ahead of Villeneuve. All other finishers were at least one lap down. Laffite celebrated his victory, but the man of the day was undoubtedly Gilles Villeneuve.

Bruno Giacomelli took fourth place in the Alfa Romeo 179C, ahead of Nelson Piquet in a Brabham BT49C-Ford and Elio de Angelis in his Lotus 87.

Wehrlein not to blame for pit penalty, says Sauber