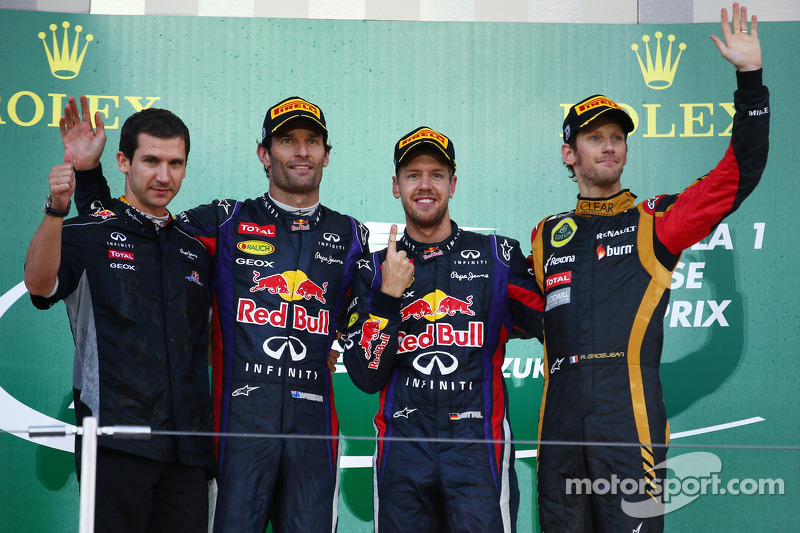 Sebastian Vettel and Mark Webber swapped their starting places at the and of the race, finishing first and second respectively.

Car 1 SEBASTIAN VETTEL, Finish Position: WINNER, Start Position: 2nd
“A very rewarding win today; it’s a great feeling. I love this track and it’s just fantastic to win here. It was a horrible start to be honest; we found ourselves sitting in third place and then tried to go longer in the first stint. I had great traction after I got past Romain and after that the only threat was Mark who got stuck behind Romain. We could then manage the gap until the end of the race. 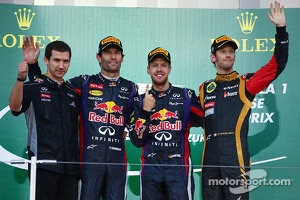 The Championship is the big target of course, but the season is very long still and the best way to wrap it up is not to think about it. I’m happy to go home for a bit now and to relax before we go out to India. That’s an impressive country and I’m looking forward to racing there in a couple of weeks.”

Car 2 MARK WEBBER, Finish Position: 2nd, Start Position: 1st
“We were on the back foot a bit after Romain’s great start. I wanted to put pressure on him for the win. Sebastian was on a different strategy to me and in the end it worked out pretty similar. It’s hard to know which was right (a two or three stop strategy), as we were trying to cover off Romain. I did my best and in the end it was a good result.”

CHRISTIAN HORNER, Team Principal: “A massive result for the team to achieve a one two in Japan. It was an exciting race that was dictated by the tyre strategy. We split the strategies between a three-stop for Mark and a two-stop for Seb, based on the expected tyre lives on the two cars. Both drivers managed to make it work to navigate their way past Romain Grosjean, in particularly brave moves down into Turn one. A great result for the Team and both Championships and congratulations to Renault for another one-two-three finish on the podium.”

THIERRY SALVI, Renault: “A perfect result for Renault today, and great to see us up there represented on the podium. We split strategies today for Mark and Seb and got a 1-2, which is of course good news for the Championship. However there are still four races to go so we’ll remain focused on the job in hand.”

Caterham drivers after race at Suzuka