Just 16 points separate the leading two squads, each owned by their respective Formula 1 title-winners, ahead of the final round of the inaugural Extreme E season in Dorset, UK.

But in the first day of running at the Bovington military base tank proving ground, it was two-time World Rally champion Sainz and his teammate Laia Sanz that had the speed.

A new rule for this weekend, which mandates the driver starting order and that the first person in the car must complete two of the three laps, meant Sanz was first aboard.

That gave the Spanish crew a healthy 19.4s cushion over their nearest competitors.

On the day that the Abt Cupra team announced its commitment to Extreme E into 2022, Mattias Ekstrom and 2001 Dakar Rally victor Jutta Kleinschmidt were best of the rest.

Their overall run of the waterlogged, clay track was worthy of a 10m19.402s stint, which in turn was another second faster than the X44 duo of Sebastien Loeb and Cristina Gutierrez.

X44, which has been the fastest qualifier at all four previous events, arrives as the nearest title rival to three-time event winner Rosberg X Racing ahead of the championship climax.

Nine-time WRC champion Loeb, who took a leisurely approach to his driver change to avoid the muddy puddles, set the fastest individual lap of the day with a 2m37.849s flier.

At the narrow, high-speed replacement venue for an Argentina round - which was cancelled due to COVID - X44 found a 12.8s advantage over Rosberg X Racing.

Four-time World Rallycross champion Johan Kristoffersson posted his lap and immediately travelled to the FIA Awards in Paris with the Hansen brothers before returning on Friday. 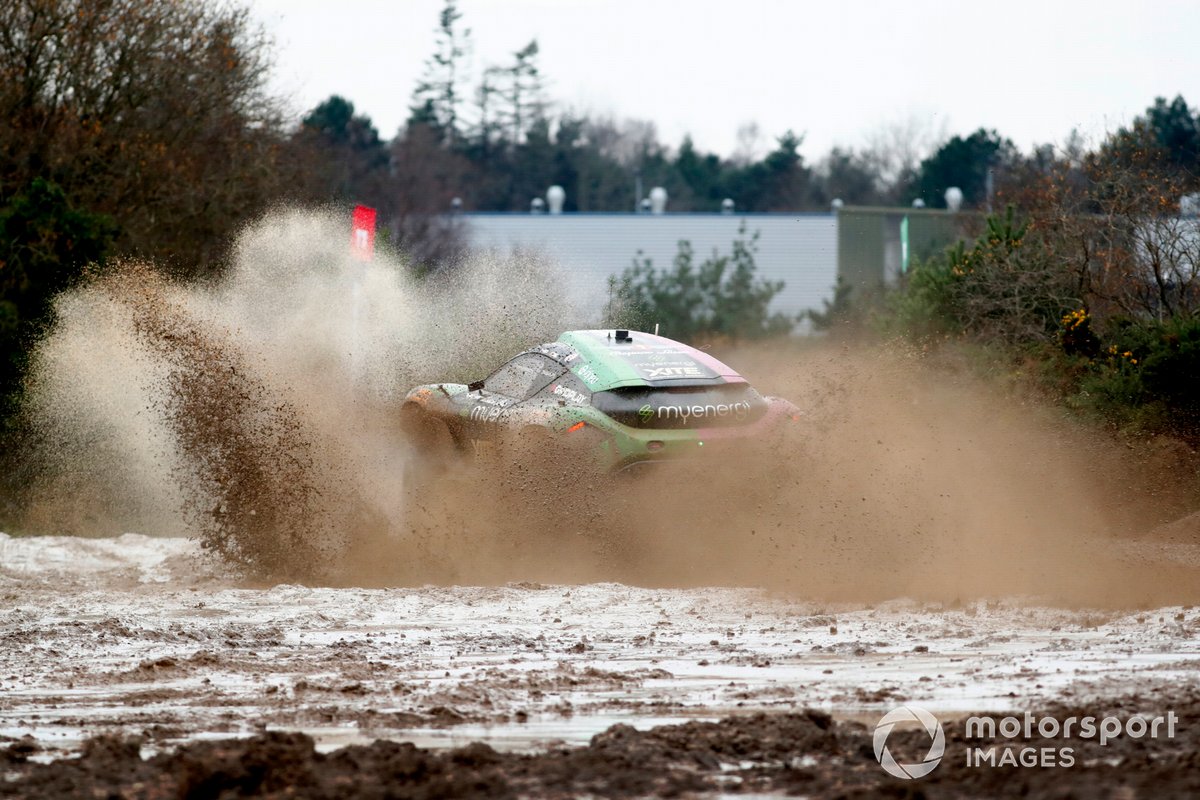 After a clash with W Series, two-time champion Jamie Chadwick returned to the cockpit to replace the deputising Emma Gilmour – now signed by McLaren for Extreme E in 2022.

She was alongside cross-country racer Lance Woolridge, who replaces vastly experienced endurance and rally driver Stephane Sarrazin following a series of costly crashes.

Chadwick missed a waypoint at a cost of a five-second penalty.

The final three teams all hit trouble on the course, although Jenson Button's JBXE outfit did at least manage to complete the trio of laps.

Mikaela Ahlin-Kottulinsky reported brake wear as the pedal ran long, and she shipped further time stopping on the grid for a practice launch before handing over to Kevin Hansen.

The remaining Chip Ganassi Racing and Andretti United squads were undone by the 'Knife Edge' ramp at the end of the course, despite the gradients of the ramp having been reduced.

AU driver Catie Munnings stuck to the recommended speed for the obstacle but caught masses of air and the car nose-dived.

While Munnings was surprised not to flip, the front suspension buckled heavily while Sara Price had to limp the CGR machine back after a sustaining damage to the front-left.