Rosberg X Racing has clinched the inaugural Extreme E championship title thanks to its three event wins in 2021 after drawing on points with Jurassic X-Prix victor X44.

Fourth place for 2016 Formula 1 champion Nico Rosberg’s crew comprising Johan Kristoffersson and Molly Taylor in the Dorset finale meant it drew in the standings with Lewis Hamilton’s X44 as they both ended up with 155 points.

But having won the maiden Saudi Arabia event, then again in Senegal and in Sardinia, RXR took hold of the crown over X44, which had failed to score a win coming into the finale despite a 100% qualifying record.

This came despite Cristina Gutierrez and Sebastien Loeb dominating the UK showdown.

The ‘GridPlay’ popular vote rewarded effective polesitter and semi-final one winner X44 with the choice of starting slot, and Loeb and Gutierrez opted for the middle lane.

RXR were directly alongside, one lane to the left, as a new rule for the final round of the season mandated that the female driver must start the last race.

Gutierrez used her 400kW hyperdrive boost to power ahead at the start to decisively take the lead into the first corner as Taylor endured a sluggish opening stint, knowing fourth spot was sufficient to take the title spoils.

Meanwhile, a lightening launch for JBXE’s Mikaela Ahlin-Kottulinsky meant the car owned by Jenson Button peeled from the far-right side of the grid to demote Andretti United for third.

Ahlin-Kottulinsky then gave chase after Taylor, using the four-second hyperdrive activation to draw level with the Rosberg X racing machine and slot into second place over the ‘Knife Edge’ jump.

As Gutierrez disappeared into a 6.4s lead for X44, RXR slipped back further as Catie Munnings relegated Taylor to leave Acciona Sainz’s Laia Sanz to take the title away from Rosberg’s crew. 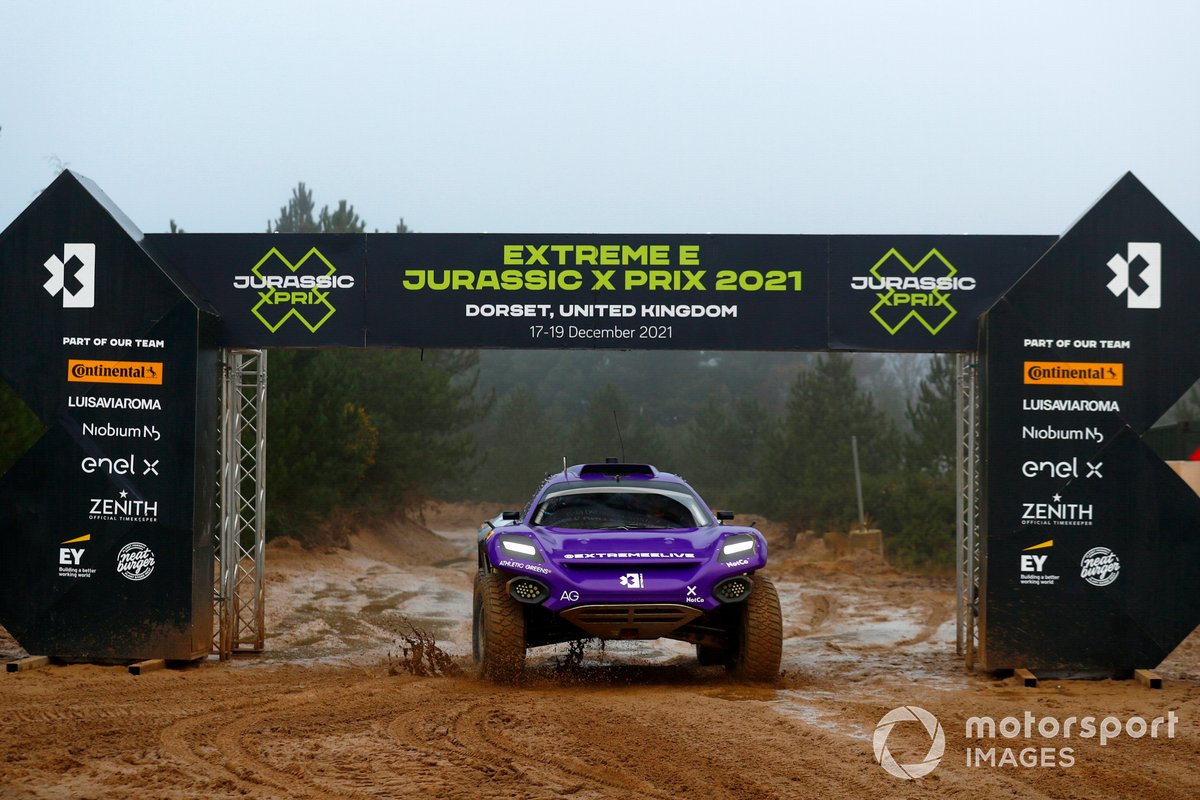 But a spin for Sanz relieved the pressure, while Munnings had to punch reverse after losing the rear end when she stamped on the brakes to avoid clattering into the JBXE car on the approach to the speed-limited driver change over zone.

Gutierrez ended her two-lap stint with 3.3s in hand over JBXE as she vacated the car for Loeb, and the spare-time orthodontist was only narrowly missed by a recovering Munnings.

As the Andretti United car headed for its pit lane slot, Gutierrez leapt out the way, but Munnings still collected the X44 driver’s seat cushion and dragged it down the road.

Loeb belted aboard and emerged with a 4.4s margin to JBXE and converted the victory at the Bovington military base tank proving ground.

That, combined with the bonus five points for setting the fastest time of the round through the designated super sector and the year-long qualifying prowess, left X44 with 155 points.

But four-time World Rallycross champion Kristoffersson brought home the RXR car, which was late to the grid after a last-minute front inverter swap, in a necessary fourth.

The success earlier the season wrapped up the crown for him and Taylor.

Meanwhile, Kevin Hansen delivered second in the finale for JBXE to wrest third in the teams’ championship away from his brother Timmy Hansen and his Andretti United stablemate Munnings.

While Kristoffersson crossed the line 15s behind Loeb, the margin was the same again back to two-time World Rally champion Carlos Sainz Sr as he brought up the rear in the recovering Acciona Sainz machine.