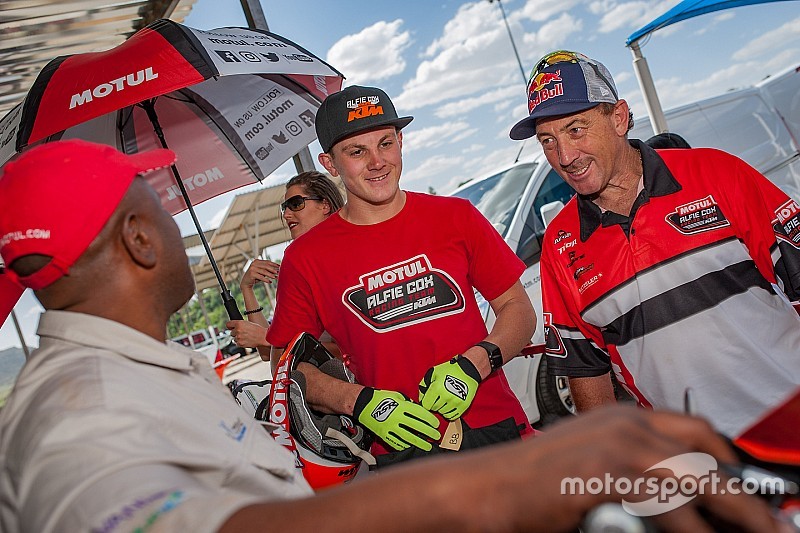 Everyone in the bivouac of the hard enduro events keep an eye out for Billy Bolt.

The British youngster is being considered as one of the next top stars and was close to clinch a podium spot at the Motul Roof of Africa event.

The 18-year-old gained much experience as a trials rider and made his debut on an enduro bike this year.

Already after six months Bolt was asked by Alfie Cox to join his team. That question was received as an honour, as Cox is a legend in hard enduro motocross racing, having won the Roof of Africa nine times.

"I met him in Romania in July and asked him if he would like to come with us and he said 'of course'. We brought him under the banner of Alfie Cox Racing to one of the biggest races in the world," Cox explained to Motorsport.com.

"He has been with us for three weeks at home and he's a lovely guy, comes from a great family."

Cox agreed that the Roof of Africa was a tremendous challenge for his youngster.

"He's only been on an enduro bike since January and it's not an easy race to come with if you are not an experienced navigator," he emphasised.

"He's a trials rider, something we always saw in guys like Graham Jarvis [four-time winner of the event]. They are good at the technical stuff but you get to learn the skill of going fast and the skill of navigating, this is what he is doing at the moment."

Despite his first event on Lesotho's unforgivable terrain, Cox aimed for champagne.

"I was hoping for a podium, which is a big investment on somebody like that but he's a wonderful guy and he's got a huge future and that's important."

While Graham Jarvis and Alfredo Gomez battled for the win, a pack of five riders rode together on the final day.

Bolt and four South African riders, mostly youngsters too, were gunning for the final podium spot. And that was tough considering the 160 km track the day before took him nine hours to complete.

"That [the second day] was one of the hardest days I've ever had. At some point all classes came together and there were so many riders to go around, you got to push so much that asks a lot out of yourself.

"Once I got at the top I was really taking it steady just focusing on getting back," Bolt told Motorsport.com.

He was classified eight that day, followed by a seventh place after completing the event. "Fortunately the final day was a lot nicer and more enjoyable to ride."

Coming from the United Kingdom, the local terrain is nothing like what he experienced in Lesotho. "It's really difficult to prepare yourself because in England we have not so many places to ride and they are all really small.

"To ride a big 100km loop is almost impossible and the races are also short and never on GPS. Everything is new here, but we're learning.

"The Roof of Africa was slightly harder than I was expecting," he added. "The day has been a lot longer and the terrain is so unforgiving; you have to concentrate so hard all the time because there are so many small stones. It really takes it out of you."

When asked if he would be back next year, Bolt answered without hesitating: "Of course."