With about three hours to go in the 2014 Dunlop 24 Hours of Dubai, Dragon Racing technical director Ian Bickerton descended from the team's pit gantry and declared prophetically, "We are going to win the Pro-Am Class..."

It was a bold statement at the time because the team's number 888 Ferrari were in third place at that point, although within sight of the leaders, the task at hand was enormous. 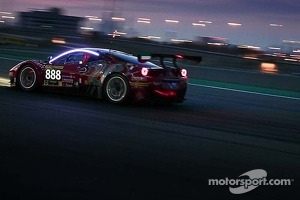 Furthermore the Dubai based team had suffered a huge blow when their number 8 car crashed in the middle of the night while leading the Pro-Am class, and emotions in the pit garage were mixed.

Nevertheless, the team focused on their second car with Jordan Gorgor, Khaled Al Mudhaf, Frederic Fatien and Mohamed Jawa doing the driving. With a couple of laps to go the team reworked their strategy to attack for the lead and race win.

After strong final stints the red Ferrari with the fancy dragon emblazoned on the side had done the business to claim first place in the prestigious Pro-Am category, a mere 44 seconds ahead of their closest challengers, namely the Lamborghini Gallardo of Oliver Webb, Isaac Lopez, Jan Stovicek, Yoshiharu Mori and Jeroen Mul.

For the 'gentlemen' drivers of Dragon Racing it was a career defining result, as they banded and bonded together as a team and as a unit. All delivering during their stints when required, with consistency, speed and discipline.

Team principal Leon Price was overjoyed by the achievement, "I am probably more emotional than I have ever been. It's our Pro-Am car with local boys in it. Two of them had never done anything like this before, but as the race progressed they just got better and better, quicker and quicker, safer and safer.

And Jordan made it happen in the final stint. Mohamed had a great run before that which allowed us to adopt the final strategy, Khaled and Frederic were great team players, they also did their job. We got the podium, we got the win. Next year we will be shooting for two."

For Dragon Racing, based at Dubai Autodrome, it was a just reward for setting the highest of standards in the Middle East motor racing scene, and with Bickerton calling the shots with such confidence this could be the beginning of a successful streak for the outfit.