Victory for AF Corse in the Gulf 12 Hours 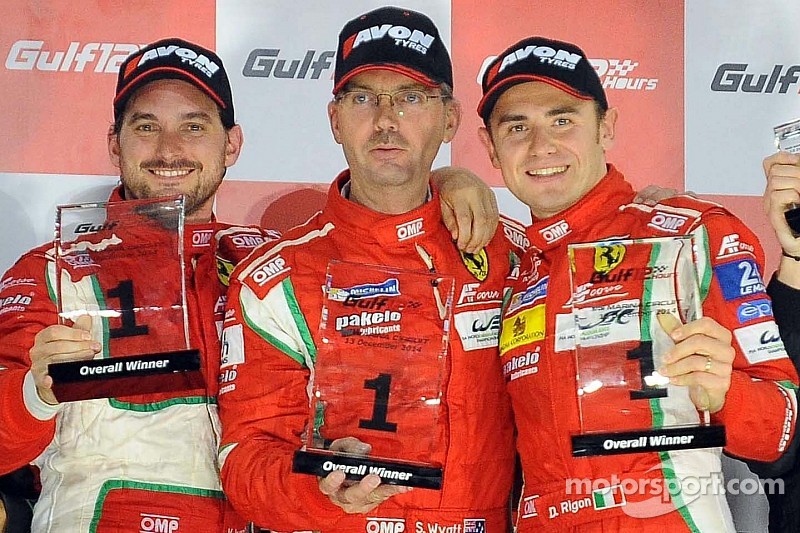 Michele Rugolo took the win by 3.058 seconds after 315 laps of racing at the Yas Marina Circuit.

A last minute safety car caused by a spin from the Kessel Racing Ferrari 458 GT3 of Jorge Lorenzo changed the face of the 2014 Gulf 12 Hours race. Michele Rugolo, driving the AF Corse Ferrari 458 GT3, made the best use of the lapped traffic following the restart with just 30 minutes remaining, to take the win by 3.058 seconds after 315 laps of racing at the Yas Marina Circuit.

Everything went to plan, the car ran faultlessly for the full 12 hours despite some very strong competition but we're just glad to be on the top step in Abu Dhabi,

"We did our best and we were very close but the Ferrari was extremely fast this year," the defending champion, Khaled Al Qubaisi said.

"The AF Corse guys had more speed than us, about 2/10ths of a second per lap but we tried our best and it was very close. It's always disappointing not to win when we came to win but we will try again," Qubaisi said.

Both Schneider and Parente were caught behind the lapped Ferrari of Cedric Sbirrazzuoli despite waved blue flags being shown to the AF Corse driver which allowed Rugolo to open up a four second gap after three laps that eventually ballooned out to 10 seconds before backing off to take a comfortable victory.

"Everything went to plan, the car ran faultlessly for the full 12 hours despite some very strong competition but we're just glad to be on the top step in Abu Dhabi," Rugolo said.

Right from the first corner after the start at 8.49am the action began when Bleekemolen pounced from his second row grid position to steal the lead from a surprised pole sitter Bell in the McLaren who gave the 650S its world competition debut in the Gulf 12 Hours.

From there it was a game of catch up for Bell and Rugolo in the opening hours.

"I was a bit surprised by the start the Black Falcon Mercedes got, but we had a race-long strategy and did not want to be forced into a duel so early but we stayed focused and fought back over the course of the race," Bell said.

PRO-AM's top qualifiers, Black Falcon Racing started from fourth with Richard Muscat behind the wheel but fell back one place allowing the AF Corse Ferrari driven by Marco Cioci to lead the class in fourth outright at the conclusion of the first hour.

Second in PRO-AM was AF Corse Ferrari with Filipe Barreiros, Piergiuseppe Perazzini and Marco Cioco while a surprised Dragon Racing from Dubai made it on to the podium after final results were confirmed with driver Jordan Grogor from Dubai, Mohammed Jawa from Saudi Arabia and Sean Walkinshaw from the UK in their Ferrari 458 GT3.

Despite his late race crash, two-time world MotoGP champion Lorenzo and his team had completed enough laps to give the Kessel Racing Ferrari victory in the Gentleman class with co-drivers Liam Talbot, Marco Zanuttini and Jacques Duyver.

Competing for CN2 honours was a two-horse race with both Avelon Formula cars swapping positions for most of the race. Both cars suffered a series of problems but battled right to the end with the top place eventually going to the team of Simon Stoller, Gianluca Pizzuti and Fabio Emanualla in 17th outright, three places ahead of the duo of Ivan Bellarosa and Gugliemo Belotti in the sister car with Nicola De Val, Stefano De Val and Jose-Pedro Fara driving for CRM Motorsport finishing in 21st position.

Victory for Jorge Lorenzo and Kessel Racing at Gulf 12 Hours