The car entered in the SP2 class will be drived by team owner Raphael van der Straten in its maiden raace. Co-drivers for the Dunlop 24 Hours of Dubai will be Benjamin Bailly, Thierry de Latre du Bosqueau and Erik Qvick.

What with the end-of-year festivities just around the corner, motorsport is now back on track. True to tradition, the Dubai Autodrome will be hosting the first endurance race of the season.

With more than 80 cars entered, the event’s success, organised by the Dutch Creventic team is guaranteed. All the more so seeing these 24 Hours of Dubai 2013 will see the race debut of Belgium’s newest arrival on the motorsport scene: none other than the VDS GT001-R entered by the VDS Racing Adventures team. 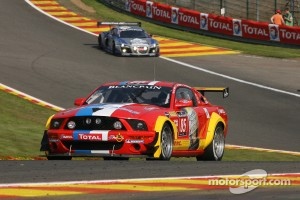 “The car was air-freighted to Dubai, and has arrived at the circuit, and is presently in its stand, Raphaël van der Straten explained, who can now claim to take on the role of constructor in addition to being the team owner and driver.

Since its official launch at Autoworld in Brussels, the VDS GT001-R has carried out test runs at Spa and Mettet. Whilst we were in Miami with José Close, Tony Gillet personally carried out an additional work session on the Jules Tacheny circuit.

All in all this amounts to some twelve hours of test sessions that the car went through prior to being shipped out to the Emirates.”

Entered in the SP2 category, which counts eight cars, the VDS GT001-R will obviously be driven by Raphaël van der Straten, teamed up for the occasion by Benjamin Bailly, Thierry de Latre du Bosqueau and Erik Qvick.

Acting as the team-manager, José Close will also be on hand as the fifth driver, ready to get behind the wheel of this latest Belgian muscle car at any given moment. ”I am confident that we won’t experience any major problems with the VDS, Raphaël commented.

It goes without saying that there will no doubt be some very minor worries for this maiden race, but the team has pretty well foreseen just about everything, and all the spare parts are available in double.

In fact it’s as though we had come out here with two VDS! On the safety side we have gone so far as to foresee a lever gear change system, in the event that the paddle shift should cause problems.

I must admit that for this grand Première, a place on the podium in the SP2 class would delight me no end. It would be a wonderful reward for all the hard work put in up until now.

This will be our 7th participation in the 24 Hours of Dubai, and the VDS Racing Adventures team is already entered for the … 2014 edition! “

The least one can say and write is that this VDS GT001-R, in its red, blue and white livery, which perpetuates the van der Straten family in racing, has attracted a fair amount of interest regarding its entry at Dubai.

“In fact I received … 47 proposals from drivers with a budget, all wishing to be a part of the VDS’s first team, Raphaël continued. Trust and friendship were nevertheless the most important elements, and I’m very proud of our team.

As from Wednesday we’ll be taking part in the free practice sessions, whilst the more serious matters kick off on Thursday. As for the start of these 24 Hours of Dubai, this will take place on Friday on the dot of 14.00hrs, with the finish some twenty-four hours later. So it’s take one, and action!”

Record field ready to rumble at 24 Hours of Dubai